It was a Friday night screening of a documentary film in September 2015 at the Globe Theatre, but for Steve Schroeder, it was everything a film festival is capable of being.

The doc in question was Guantanamo’s Child, which told the story of Omar Khadr, the Canadian teenage boy who’d been charged with murder as a 15-year-old during the Afghan war, and sent to Guantanamo Bay until he was relocated to a prison near Edmonton, before being released.

Khadr’s story was controversial and widely-covered. Part of the terms of his release from prison were that he couldn’t leave the house of his attorney, where he was living—until that Friday night at the Calgary International Film Festival.

That’s because at the conclusion of the screening, which was full of hundreds of Calgary film lovers, CIFF Executive Director Schroeder stood up, grabbed a mic, and introduced Khadr, who turned out to be a charming, gracious man.

“The audience didn’t know he was going to be there,” Schroeder says.

“He’s a very controversial figure but when you meet someone in person, who has been the subject of so much international news, and you get a feel for who they really are, it’s a very different experience than what you’ve heard in the media.”

It wasn’t just a film screening. It was news.

And for Schroeder, it was a snapshot of what the Calgary International Film Festival is all about, namely the audience experience.

Calgary’s film festival rarely features A-list, Hollywood names. Instead, it’s a film festival that brings the world’s cinema stories to screens every fall, in the form of an assortment of languages, sensibilities, lengths—many are shorts—and formats.

“We’re very much connected to and supporting the industry,” he adds, “but really, when we looked at the type of programming we were going to do, what we were going to put on the screen, how we were going to organize those films, where we were going to screen them, what types of cool fun events we program around films themselves, what type of off-screen events happen—like tours, talks, lectures, happenings, all those things—the number one question we ask is, how does this make the audience experience more enjoyable? More exciting?

“How does this invite the audience themselves to be greater champions of filmmakers overall?”

Concentrated on Stephen Avenue, in the blocks around the Globe, and the Eau Claire Market, the festival is one of those local events that connects to a specific community of film-lovers.

Moving ahead, as the city looks for ways to animate its downtown spaces, Schroeder hopes to grow CIFF’s municipal footprint, and to find ways to engage an even larger community to attend events such as Guantanamo’s Child, or its red carpet premieres (which frequently take place at larger venues, such as Jack Singer Hall or The Grand), or its kid-friendly fare. 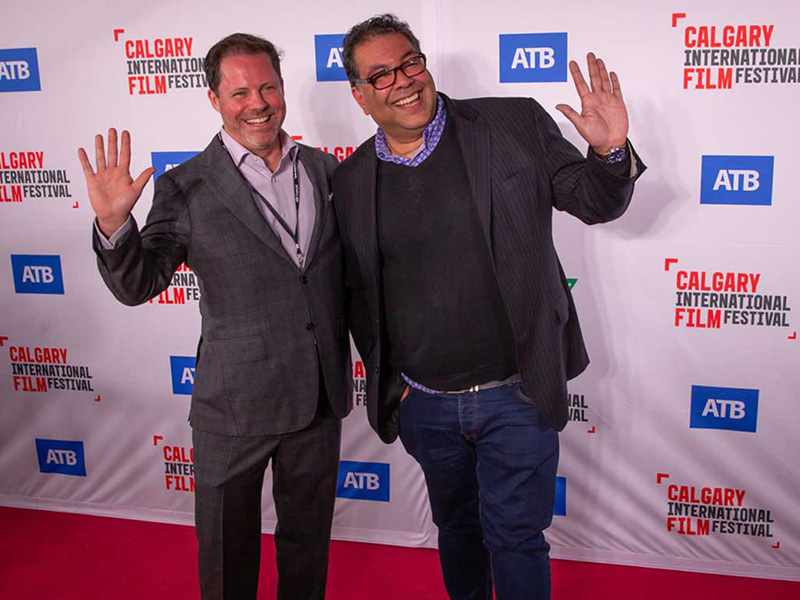 “People ask me, when is the Calgary Film Fest going to have the same presence in the city as the Calgary Stampede, and I say, we’re working on it,” Schroeder says.

In 2019, as it turns out, the 20th, Schroeder is thinking, it might be fun to dial up the festival’s profile and party.

“For our 20th anniversary, we’re working on having some more recognizable names to attend the festival, because we know that’s fun for audiences,” he says.

“That’s really appropriate for celebration—and if going forward, the festival grows and we’re able to attract more celebrities and more well-known names from the screen world, then that’s great. And that totally plays into and supports the direction we’re going—but the important distinction is, our main mission is not bringing celebrities.

“We don’t wake up in the morning and go, how can we bring celebrities to Calgary?

“We think, how can we make a great film festival experience that’s a celebration for people who love movies? That’s what we try to do.”

Schroeder is happy to let his festival full of timely, thought-provoking, contentious cinema dictate who shows up to answer questions from Calgary film-lovers, much the way Khadr did that Friday night in 2015.

“It felt like a significant moment in Canadian history, really,” he says. “Events like that make you realize you’re part of something much bigger.

“These stories onscreen are part of much bigger stories,” he continues. “And it keeps me doing what I do.”