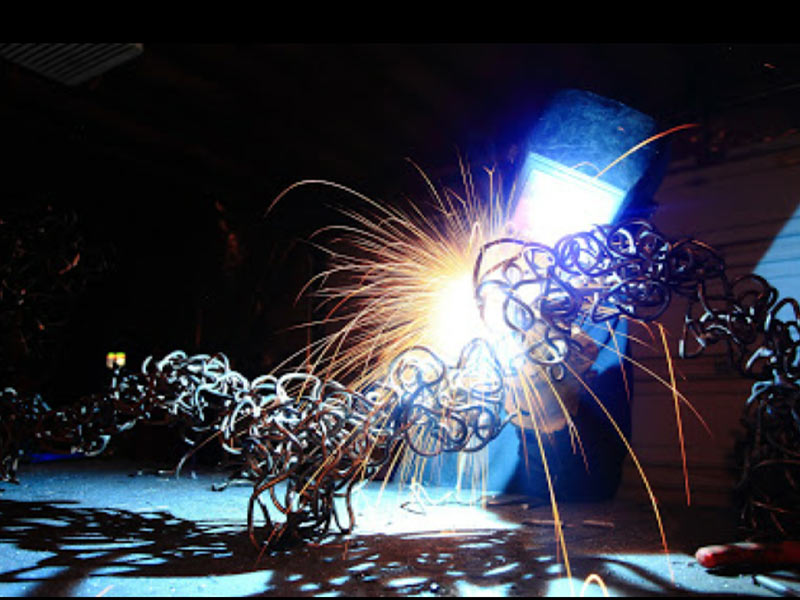 As one of the youngest female Canadian sculptors working with welded public art, Sinéad Ludwig-Burgess continues to create surreal artworks that question the viewers’ notion on space and the human body. By using the body as a metaphor, the form is capable of communicating a wide range of emotions and universal truths at the core of the human experience.

Sinéad Ludwig-Burgess has always been fascinated with the miracle of the human body and is curious as to how the mind influences the body to create healing mechanisms to transform the entire self. Acting as an allegory for a body that has overcome adversity, Ludwig-Burgess creates dynamic figures that communicate the visible and the invisible language of human emotions. Sinéad believes human evolution can be reflected through the processes of manipulating steel. The traditional idea of the physical and mental self as a stable and infinitely whole form has eroded. The figure in visual culture cannot be stable, or entirely fragmented, but is always being renewed and reproduced in an exchange between the symbol, the body of the viewer, and the body of the artist.

The focus of Sinéad Ludwig-Burgess’ studio practice in using the human body is to articulate various states of emotions in the viewer. What is meant to be evoked is the concept of our dismembered integrity, as what was once considered an infinitely whole form is eroded by the negativity in our environment.

Sinéad Ludwig-Burgess works and resides in Calgary, AB predominantly creating sculptures that consist of welded steel and mixed media. In the summer of 2017 Sinéad Ludwig-Burgess first public art sculpture was installed titled, “Caelum et Terra”, which is located on the property of a post-secondary polytechnic school in Calgary, Alberta known as SAIT. The majority of Ludwig-Burgess’ art in her portfolio incorporates the use of scrap metal and recycled materials where she enjoys the process of repurposing these items to make environmentally conscious sculptures. Sinéad is interested in creating works that reference the human body and continues to follow her passion exploring the limitless potential of metal.