Summer might be over but that doesn’t mean that Calgary’s festival season is. With fall comes a warm and cozy lineup of offerings from perennial favourites like Wordfest, Fluid Fest, CUFF.Docs, and many more. 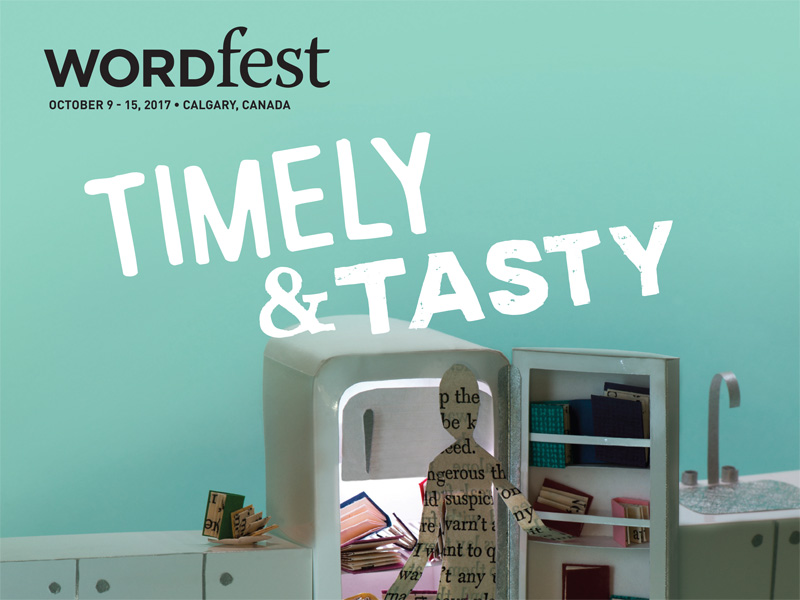 Cosy up to Calgary’s own literary festival as Wordfest returns this October | Image: Courtesy of Wordfest

With more than 85 writers in over 60 events, here’s your chance to dive into Calgary’s festival dedicated to readers. So get ready for a week of meaningful conversations with the world’s most engaging writers.
wordfest.com

Calgary’s roots festival returns with three days of rocking music in venues across Calgary. With a lineup including Brooke Wylie, The Travelling Mabels, Little Miss Higgins, Zachary Lucky, and many more, this is the perfect October treat for fans of music with a twang.
widecutweekend.com

A celebration of Canadian artists and musicians, the Calgary Philharmonic Orchestra raises its glass to Canada 150 with a monumental musical journey. Featuring beloved acts like the Kronos Quartet, Corb Lund, Fred Penner, and Michael Bernard Fitzgerald, the landmark True North Festival is a must for any Canadian music fan.
calgaryphil.com

Add a touch of laugher to your October with an all Canadian line-up featuring Shaun Majumber, Steve Patterson, Pete Zedlacher, Debra Digiovanni, Graham Clark, Deanne Smith, Amanda Brooke Perrin, and Andrew Phung. This year’s YYComedy Festival is sure to be amazing.
yycomedy.ca

Each year Fluid Fest brings artists and audiences together with contemporary art, dance, and physical performance. Be on the lookout for shows, workshops, artist talks, and happenings all meant to inspire and connect.
fluidfest.com

Providing concert goers with a wonderful opportunity to explore, this full weekend of diverse new music and sound art events is set to take over the city for the third year.
neworkscalgary.com

Honouring Dia de Muertos, take in this night of festivity and fun with Casa Mexico and Arts Commons | Image: Courtesy of Casa Mexico

Join Casa Mexico and Arts Commons for a night of festivity and fun with an altar exhibition accompanied by live performances. Have your face painted in Catrina style, check out the art show, and enjoy Mexican hot chocolate and food stations.
artscommons.ca

Join the Tibetan Community of Alberta and peruse a market filled with a wide variety of Tibetan goods including jewellery and crafts to delectable treats. Bazaar-goers will even be entertained by traditional dances.
albertatibetan.org

For the first time ever, Canzine—Broken Pencil Magazine’s festival of zines and underground culture—is coming to Calgary and bringing with it hundreds of zines, books, comic, and small press vendors.
brokenpencil.com

Celebrating European cinema here in Calgary, see films from 18 European countries thanks to this festival. All productions are screened in their respective languages with English subtitles.
calgaryeuropeanfilmfestival.ca

From exciting contemporary jazz to hard-hitting swing, JazzYYC’s Canadian focused fall festival is full of exciting collaborations and all-ages events including a free jazz walk and a mainstage performance from Trevor Giancola.
jazzyyc.com

This festival is all about film with a social edge. Screenings include post-show discussions with local and international artists and experts, as well as opportunities to interact and connect with community.
justicefilmfestival.ca

Growing out a desire to bring more international documentaries to Calgary, this year marks the fifth go for this documentary festival. And with 12 full-length features, as well as shorts, varying in subject, style, and genres, there’s sure to be something for everyone.
calgaryundergroundfilm.org

Showcasing music, comedy, visual art, and film by marginalized groups in Calgary and its surrounding areas, this festival celebrates underrepresented voices in the arts, specifically those of anyone who identifies as a woman.
femmewave.com

Full of quirky and stunning animation alike, this festival is always a great time. Hosted by Quickdraw Animation Society check the site out on October 13 for the first wave of film announcements.
giraffest.ca

Featuring juried and satellite exhibitions as well as other public programs, the SPARK Disability Art Festival is Calgary’s largest and longest running arts festival for visual artists with disabilities. This year’s festival takes places in seven different venues across the city and includes public programs presented in partnership with the University of Calgary Department of Art, Nickle Galleries, Alberta College of Art + Design Students’ Association, and artist Dick Averns.
sparkdisabilityartfestival.com

Head to Knox United Church for three nights of carol singing from Calgary’s best choirs and includes the carol sing-along with choir and organ. Non-perishable food items or a cash donation for the Calgary Food Bank is welcomed for admission and seating is on a first-come first-served basis.
knoxunited.ab.ca