Kate Letizia was a graduate student, doing research in Peru and then working in the Philippines, when she discovered that marginalized people everywhere share a common occupation. It’s also one of the most environmentally-friendly gigs you can get: bottle picking (also known as informal recycling).

“Some international organizations that promote bottle pickers’ rights,” Letizia says, “argue that waste picking is the most universal form of employment on earth. I don’t know if they can prove that but it happens wherever waste is generated, which is everywhere on the planet, so it makes sense.”

That discovery meshed with Letizia’s thesis research on the economic and environmental benefits of supporting informal recycling in developing countries and her experience working in the homelessness sector in Calgary.

“We were arguing,” she says, “that if you respect and enhance the good work that people are already doing, instead of trying to make them do conventional work that doesn’t suit them, you’re going to see big outcomes.”

That led to the informal creation of Calgary Can in 2012.

“After coming home and seeing our bottle pickers doing really great work just like people in the landfills in Peru, and in the Philippines,” she says, “It made sense to try and use my privilege and community connections to make that good work safer, more accepted by the community, and more profitable.”

Letizia was working at the time with the Calgary Homeless Foundation, which helped her gain access to various non-profit groups as well as the bottle pickers themselves, in order to gauge their interest in having bottle picking transformed in whatever way they saw fit.

“I recruited a few friends from those homeless organizations to help me figure out how to safely and respectfully hit the streets and start talking to people without getting in their way,” she says. “The people that were volunteering for me kind of knew where everyone was.

“We just chatted [with them] like we would with anyone else, and asked what their lives are like. We wanted to make sure that people were actually interested in any form of intervention before we made official steps forward.” 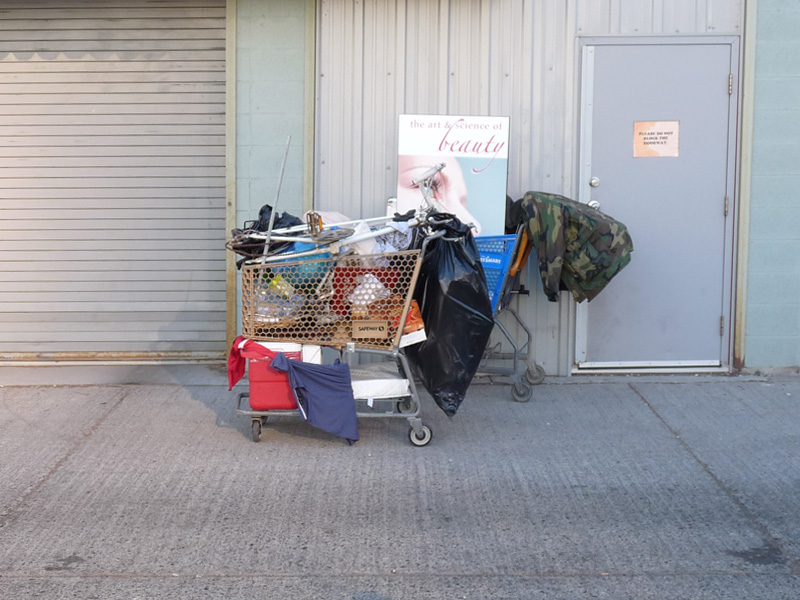 A local bottle picker’s cart and belongings at a Calgary Can engagement event at the Uptown Bottle Depot | Photo: Courtesy of Calgary Can

Calgary Can’s vision is that bottle pickers are valued and compensated for their environmental and economic contributions.

Its mission is to create a community-driven enterprise that involves and employs bottle pickers on their own terms.

To paraphrase Hans Schumacher, the author of the 1970s classic Small is Beautiful, which explored the possibility of changing the world through micro-movements (before micro became a catchphrase), Calgary Can aspires to discover economic solutions to social problems—as if people mattered.

That includes long-term goals of possibly creating a picker-owned bottle depot and various pilot projects such as PICK’D, which seeks to team up people with bottles to picked up with the bottle pickers already in their area.

There’s also a project afoot to invent a safer way for pickers to retrieve recyclables without foraging through recycling bins, where they frequently cut or injure themselves.

What might come as a surprise is the diversity of the city’s pickers, she adds, estimating that there are over 1,000 pickers Calgary, most of whom exist in a highly structured, well-established—but completely informal—network.

“It’s made up of seniors,” Letizia says, “people with all kinds of disabilities, mental and physical, who are supplementing income support. There’s youth doing it, as well as immigrants who may have been informal recyclers in the country they came from, and that’s what they do here too.

“People have issues with ID and they can’t get legal work, and then, yes, of course there are many homeless and people with substance abuse issues bottle picking as well. The point is, the group is super diverse. And definitely they’ve got a code of conduct—in Vancouver, they’ve even written it down and they’ve named it.

“Here in Calgary,” she says, “it’s a bit more casual, but I know for sure that one of the most important rules in the code is not to make a mess—most bottle pickers get really frustrated when they see that somebody’s made a mess, because that ruins it for everybody.”

Letizia and Calgary Can’s numerous volunteers work directly with Calgary’s bottle pickers to develop programming that creatively addresses the challenges they face because who knows what a picker needs better than a picker?

“We don’t always give people from our marginalized populations the space to be creative” she says, “that’s what’s so fun about our work.

“These people are entrepreneurial and complex. Their experiences are diverse and fascinating, and the ideas they come to the table with blow our minds all the time. There’s creativity coursing through that population.”