A lot of people would walk a mile to avoid getting up to perform in front of a crowd.

She’s one of Calgary’s bright, young musical lights, a prematurely sophisticated, funny—and driven—Grade 12 student from Bishop Carroll High School who writes songs, loves Ella Fitzgerald, and also owns three ukuleles. (They’re more fun to play than the harp, which she started on at age five, and quit shortly thereafter when she was eight)

She’s still not old enough to order a beer in a bar, but she’s been doing (kid-friendly) open mics around town, at places like Cafe Koi and the Ship & Anchor’s Saturday afternoon showcase, since she was 11.

If the open mic called for her to explain math to an audience, that might be a problem.

Performing her unique blend of jazz, pop, blues and maybe a wee bit of country thrown in there?

“My big dream,” she says, “would be like [singing at] Madison Square Garden, with a million people singing my song back to me—because if I can influence somebody, it’s great to hear!”

Stevens might have to grind away at the musical racket for a few more years before MSG comes calling, but at 17, she’s already influencing Calgary’s musical community—particularly a group of the city’s emerging youth musicians.

That’s because she’s one of the architects behind Yo Momma – Youth Musicians of Music Mile Alliance—a mentorship program launched in late October at the Blues Can on 9th Ave. in Inglewood.

There—thanks to the Blues Can switching their liquor license to a youth-friendly format—a group of youth musicians started meeting for monthly mentorship meetings, to help build a kind of toolkit to help develop their musical careers.

The Monday night get togethers are called Blues’Cool.

The monthly mentorship meetings will cover a different aspect of a professional musician’s life each meeting. The plan so far is to have one night feature songwriting, jamming another night on the songs that were written during the first session (with featured guest Tom Phillips and the School of Rock), followed by sessions that talk about recording studio protocol and how to manage your career, Stevens says.

Additionally, Stevens—working with mentors such as community activist Bob Chartier, the National Music Centre, and several other Calgary small businesses and music community leaders—has arranged to host a monthly youth music showcase at Gravity Espresso and Wine Bar in Inglewood as well, beginning in January. 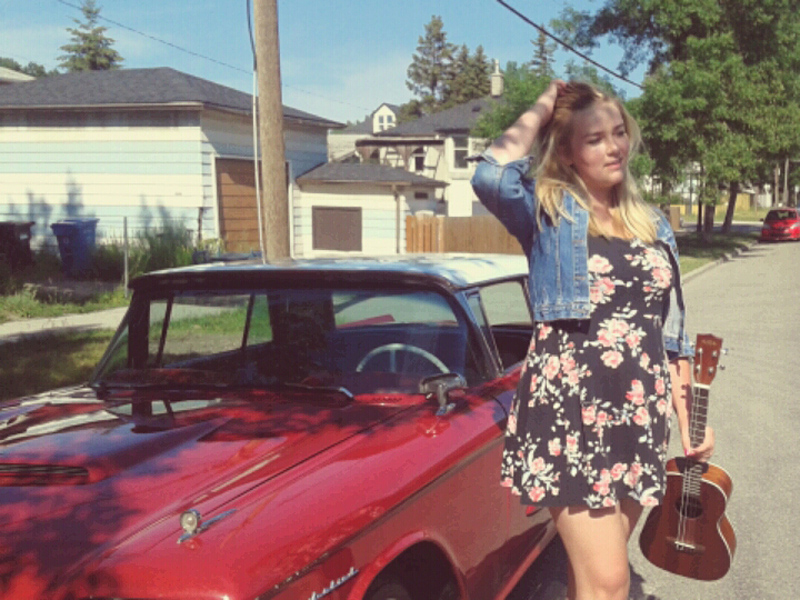 Stevens already treats her career like a job—whether it’s performing at the 2016 Rodeo pre-show in front of rabid fans at the Calgary Stampede, or carefully putting together a demo tape in various sessions at a number of Calgary recording studios (with an EP planned for June release).

The best approach a musician—as well as other artists—can take to building careers of pursuing their passion is to treat it all like a small business.

“Being a young musician in Calgary is tough sometimes,” Stevens says, “because you can’t play all the great gigs you want because sometimes, it’s age 18+ [at the venue you want to perform at].”

Add to that the basic reality that people will always try to get a band—of any age—to perform for no pay, and you have a challenging environment to say the least in which to make your small business find ways to pay the bills.

It turns out that last line came from Steven’s mother, Lisa Phernambucq, who is sitting in on our interview.

“I have the pleasure of having a supportive parent,” Kate says, “which is really great, because a lot of friends who are musicians have parents who want them to be doctors. Or they’re not going to be able to do this because their parents don’t want this—I’ve never had that.”

“We’re all creative,” she adds, “and somewhere in our life, we might be told not to be and it’s driven out of you. And I’ve really been blessed, with two very creative young people in my life.

“It sounds so cliche,” she says, continuing, “but everything [Kate] does  is creative. It just oozes out of her. Even how she dresses—it’s just an expression of herself and sharing her worldview—and it’s just really really important. You’re healthier when you’re able to express yourself.”

That faith in creativity has guided Kate academically as well, from a stint at the Calgary Arts Academy, to Bishop Carroll High, which is a self-directed curriculum that allows Stevens to make music her first priority.

“The thing with Carroll,” she says, “is, music classes aren’t before or after school, they’re during school, which is a lot easier for kids who can’t be there before school.”

That music-first mentality has helped Stevens develop a professionalism towards her passion that is pretty impressive stuff. Take this past summer when she had to focus on a summer school Grade 10 math class at the same time she was busy rehearsing for her gig at Stampede.

“That week, you made fifteen hundred bucks,” Lisa reminds Kate.

“I feel like having a Plan B is like—okay, it was a good attempt,” Kate says. “No! I’m in this for the long haul.”