There were no signs of an economic slump at the 2017 Mayor’s Lunch for Arts Champions, held March 22 at the BMO Centre.

It was a balmy Wednesday, on the day that around 650 members of the Calgary business, arts, and cultural community gathered to schmooze, break some bread, and honour a variety of creative lives that received awards.

What makes the Mayor’s Lunch such a compelling and inspiring event is that it is a celebration of creativity in the lives of everyone, not just professional artists.

That philosophy was beautifully articulated by Her Honour, the Honourable Lois E. Mitchell, CM, AOE, LLD, Lieutenant Governor of Alberta, in her opening remarks, when she said that for a long time—despite being a longtime Calgary arts champion—she didn’t think of herself as having a creative bone in her body.

But then, one day, she realized that creative living is not only demonstrating artistic ability—it’s also a kind of worldview that’s more fluid than fixed, more improvisational than didactic, and a reflection of your own individual ability to problem-solve.

“It’s all about having the courage to act,” she said. “Thinking outside the box.”

That led her to an epiphany she suggested every single person in the room might experience.

“I actually am a creative person,” she said, “living a creative life!” 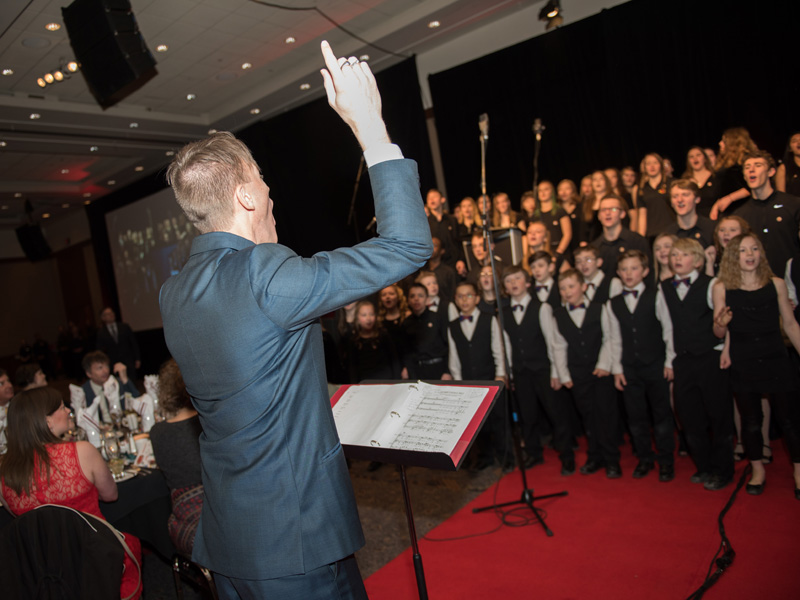 Mayor Naheed Nenshi took up the baton as well, talking about the 3 Things for Canada initiative.

Nenshi—who might be the all-time arts champion politician of any persuasion or office—also made a point of repeating his personal mantra when it comes to sharing your arts passion with others.

Nenshi also punched back at tough-guy politicians who like to label people who embrace multiculturalism and ideas such as empathy and compassion as being the qualities possessed by an elite few “delicate snowflakes.”

“I’m the man in charge of snow removal,” he said. “Put enough delicate snowflakes together and they can become the most powerful force in the world.

“Never,” he said, “make the mistake to call compassion weakness.”

Calgary Arts Development President and CEO Patti Pon stressed that increasing investment in the arts benefits the community as much or more than artists.

She also accepted Mayor Nenshi’s challenge to come up with three things she would do to live a more creative life, which she said were inspired by the words of Group of Seven artist Lawren Harris.

The winners ranged from a project created by Coulter, where she painted a dozen portraits of her colleagues, to address mental health issues, to The Northlander by Hayden-Ross, an ambitious sci-fi film that was screened at the Cannes Film Festival—all while being financed by a Telefilm micro budget grant.

Demeanor, the well-known, self-described Calgary singer-songwriter spoken word artist (who left out actor and librettist—he’s the co-creator of several musicals) may have only been speaking personally in his remarks, but in a way, he summed it all up beautifully.

“Calgary is my home,” he said, “my muse, my sparring partner, and my fuel.”

Speaking of his art-making practices, he added, “It can be so ephemeral. It goes by so fast, you don’t know if it’s having any effect—and this award suggests that it is.”