Growing up in Morley, Jarret Tymen (Twoyoungmen) loved to watch movies with his dad. They would rent videos from the local store.

He wasn’t the only kid in Morley who did, either.

“On the reserve—pop culture-wise—horror movies are just really popular,” says Sol Chiniquay, a photographer and cinematographer who grew up there as well.

What perhaps distinguished Tymen from the other kids growing up in Morley was that he wanted to make movies, not just rent them from the corner store.

He wanted to share his community’s stories, the stories of the Stoney Nakoda First Nation people—not just experience the screen stories of the Hollywood dream factory.

What better way to do that than on screen?

Meet two of the men behind the Nakoda AV Club, a filmmaking collective unlike any other.

It’s a group of around 100 film makers and young people from Morley, many of whom got their introduction to film-making the day, maybe a decade ago, when Tymen and his cousin announced they were planning to shoot a zombie film and was anyone interested in being in it?

“They said, hey—I heard you’re making a zombie movie! I think there were 37 kids who showed up [that first day],” he adds. “So we had to put a whole bunch of makeup on them.”

The Nakoda AV Club is a volunteer-run production society, a visual storytelling club that was born of Tynmen’s understanding that if there was one common thread that connected the Morley community, it was their collective love of horror films.

The catalyst came one night, when he saw 28 Days Later, a contemporary zombie film by Academy Award-winning director Danny Boyle.

“That’s the most interesting movie I’ve ever seen,” Tymen says.

“I was asking my old roommate—I said, I bet I can make something like that! Because all the raw footage he was doing—Danny Boyle—it was the most simple thing I’d ever seen, and something that I could do.”

Then, he asked his brother if he could borrow his camera to shoot a movie.

The Nakoda AV Club was born out of funding that was made available to create an afterschool camp on Morley, which led to Calgary arts administrator Amanda Foote seeking out Tymen—whom she’d met through Angel Aubichone at Quickdraw Animation—to see if he was interested in supervising young people as they learned the process of filmmaking.

While the group shoots a variety of projects, depending on available locations and volunteers, one of their most ambitious projects they’ve been working on is Rez Dogs.

That’s a documentary that explores the relationship of dogs to the reserve. Morley has lots of them, as the area has become a spot where pet owners have been known to abandon theirs. 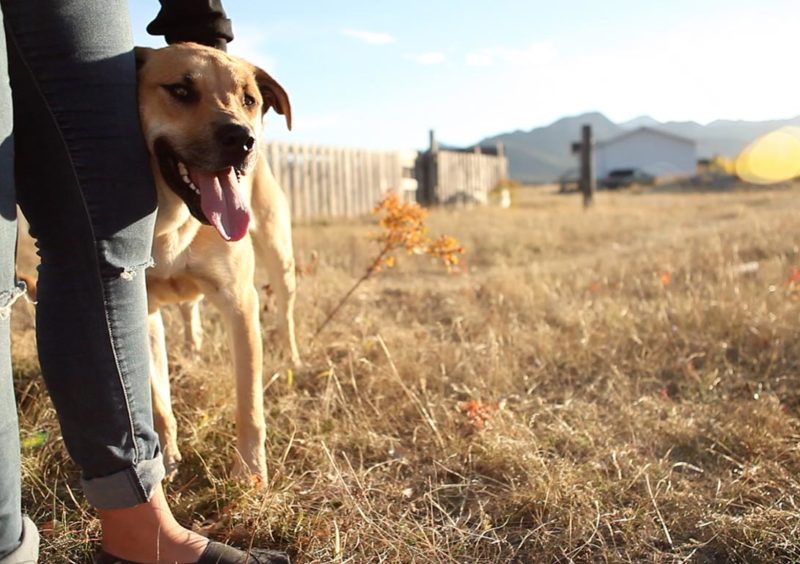 It’s also known as a place for people to get a free dog, which has led to a few people having their dogs stolen—which led to one Morley resident deciding to try to share the stories of the Stoney Nakoda First Nation people and its dogs (dogs have higher status than horses on the reserve), so what happened to her wouldn’t happen to anyone else.

“April Powderface… suggested hey, why don’t you make something about rez dogs?” Tymen says. “And we said, okay, we can do that, And so year after year, we gave her our camera, just to start filming around.

“I actually started following her. The reason why she did it was because one of her dogs was stolen,” he adds. “She had no idea where her dog was, and she loved this dog very much. She wanted to find out why no one was doing anything about it.”

While filming for Rez Dogs progresses in fits and starts, the group has also forged a deeper relationship with Quickdraw Animation, where some of the young people from the group have created their own animated film shorts.

Tymen has also found ways to turn some of the people’s stories of the community into films, such as Morning Star irha (Smiles), a 10-minute-long short that tells the story of a nine-year-old Morley girl Tymen knows who had to raise her younger siblings pretty much by herself.

“She’s being a mom at the same time she’s being a kid,” he says. “I went up to her and said, can I write a story about you? And she said yes.”

Around 2013, he wrote a script, entering it in a screenplay competition sponsored by the ImagiNATIVE Film Festival—and won.

The Calgary Society of Independent Filmmakers (CSIF) provided equipment. The people in Toronto gave Tymen some production money and he shot it, then travelled to see it screened at th ImagiNATIVE festival in Toronto, at New York University in New York, and in Calgary, before bringing it home to screen at Morley.

That was an event that was both a source of great pride for the community—and a lot of tears, seeing a difficult story about their community onscreen.

“Everyone was expecting action in Morley,” he says. “It was maybe a little too real for them.”

That’s the thing about movies that drew Tymen in the first place, all those years back, watching Hollywood action pictures with his father.

They transform reality into mythology. They supersize people’s stories–all of which is why there’s something extraordinary—and inspiring—about growing a mini movie making community on the Stoney Nakoda First Nation.

“And then when I actually saw him in Young Guns, I thought—it’s Ritchie Valens! I thought he died!

“Movies made it real for me,” he adds, “that’s a tool I’m going to use to show films everywhere if I can.”