When talk turns to ways to diversify Calgary’s economy, hopes usually focus on finding a way to transform the city through technology—the new ways of making business.

It’s called Otahpiaaki and features young designers and artists from 15 different First Nations around Turtle Island, who are transforming Indigenous designs into couture, and at the same time, thanks to Derbyshire and her entrepreneurial skill set and connections, learning the how-tos of creating a business plan, taking product to market, export, branding and marketing.

It’s all on display too, at the East Village Junction, the innovative pop-up street mall tucked behind the National Music Centre, through the Labour Day weekend.

It’s the third year of Otahpiaaki—a Blackfoot word that refers to the moment where the vamp—the top of a moccasin—is sewn together with the rest of the moccasin.

The project was launched by a quartet of Mount Royal students, as a form of reconciliation, Derbyshire says.

“It was the brainchild of four students in our senior brand studio who were encountering for the first time, information on murdered and missing Indigenous women, on the Sixties Scoop, on the intergenerational impacts of the residential schools,” she says.

“We were looking at the Truth and Reconciliation Calls to Action—and #83 has to do with Indigenous and non-Indigenous folks working together on creative projects that would allow us to know one another’s cultures better.

“To take specific action,” she adds, “as a gesture of reconciliation. So the idea of using fashion and design as a platform for reconciliation was born.”

Partners were enlisted to collaborate on the project, including Sewing Seeds Canada, the Calgary-based non-profit created by Calgarian Sylvia Rempel (as a charitable offshoot of her wildly successful Sun Ice apparel company) that spreads sewing skills around the planet—in destinations as far-flung as Sierra Leone, Peru, Ukraine, and Mexico—as a way to lift impoverished women out of poverty.

“They’ve been doing this for years,” Derbyshire says. “So we have projects in September, literally going onto reserves—taking sewing machines, taking fabrics and reintroducing beginner, intermediate, and senior projects to various Indigenous Nations.

“There’s always an Indigenous design sponsor who is welcoming the group,” she adds. “The materials come, there are Indigenous teachers on the reserve, and they’re working out which projects they want—because designers are also having great success and they need to hire their first employees.”

If Sewing Seeds helped Indigenous designers with the fundamentals, PARK helped with pushing their new creations into the marketplace.

Three years ago, Derbyshire and the group of designers decided they wanted to showcase their new designs in some way that was a bit beyond the original plan—a fashion show in the hallway of the business school at MRU where they routinely met to launch Otahpiaaki.

Not having much background in producing fashion events, Derbyshire called PARK.

“I called them and said, is it crazy we want to do a fashion show in about 30 days? And they were like, not at all! Come on!” 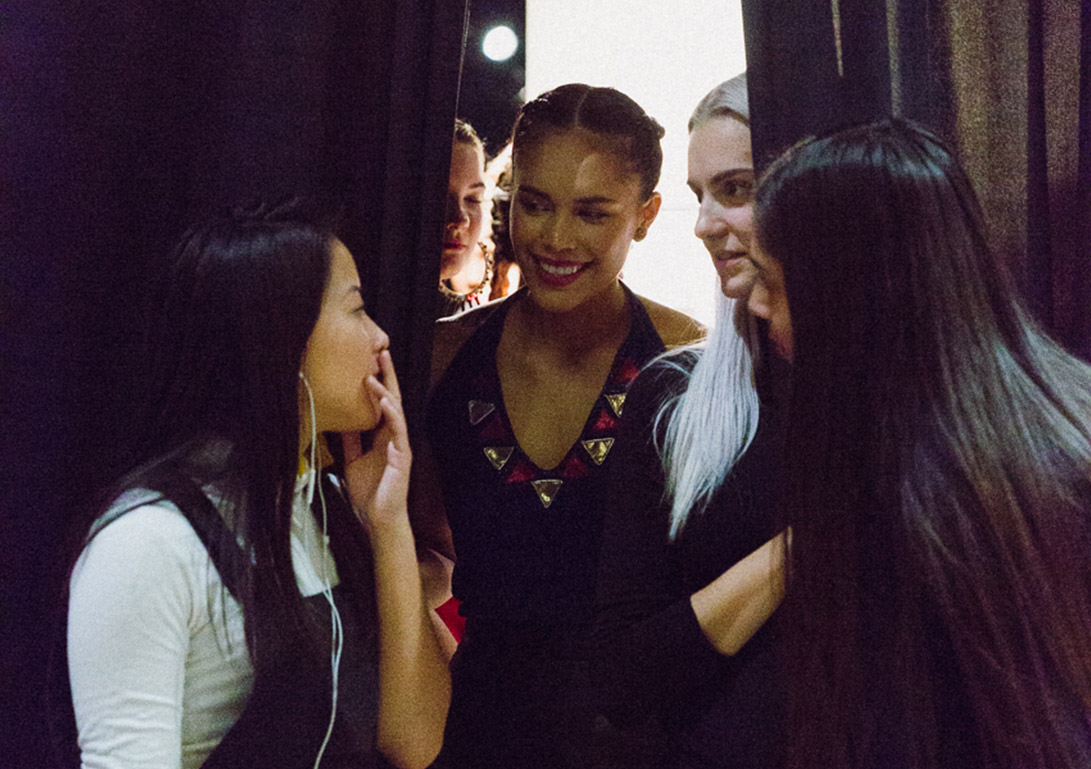 That relationship has blossomed over three seasons, Derbyshire says.

“What we really love about our relationship with PARK, is that they have really become true partners in this gesture of reconciliation,” she says. “They don’t just show up and kind of shine their brilliance on us and go away. They are true partners in terms of the calibre of the show, seeking guidance from our Elders, and now that we deal with 15 designers and many more workshops—we really rely on them for that expertise.

“And likewise, what they’re doing is identifying this new generation of couture Indigenous designers who also go onto their runways—and that’s really exciting.”

She’s being assisted by MRU Policy Studies student Spirit River Striped Wolf, who’s done research into what was lost culturally, as a result of the Sixties Scoop and residential school traumas.

There’s even an Environmental Science student, Braden Etzerza, who is implementing prosperity crops—this summer 225+ Indigo plants, from which the designers are able to create blue dye to use in their designs. The project also increases food and water security on participating reserves.

All those partnerships will be on display from November 5 to 10, 2018 during Calgary’s Indigenous Fashion Week.

“What we thought was going to be one night of fashion in a hallway, in the business school, has grown to three nights at City Hall,” Derbyshire says, including music curated by Richard Sparvier (BLKFT), a prominent producer in the local Indigenous hip-hop scene.

“He’s a force in this city, getting young Indigenous folks the skills they need for rap, hip hop, turntables,” Derbyshire says, “and he and his team are building this movement for contemporary Indigenous music in this city.

“Calgary is the fashion show to be at, if you’re part of Indigenous design, or involved in activism.”

But Derbyshire’s designers are also spreading their wings all the way across the ocean, to the City of Lights, where couture was born.

That’s when the Otahpiaaki designers must put on their brand-building hats and with input from a few good social enterprise and marketing students, they’re making inroads that extend all the way to the runways and buyers in Paris. 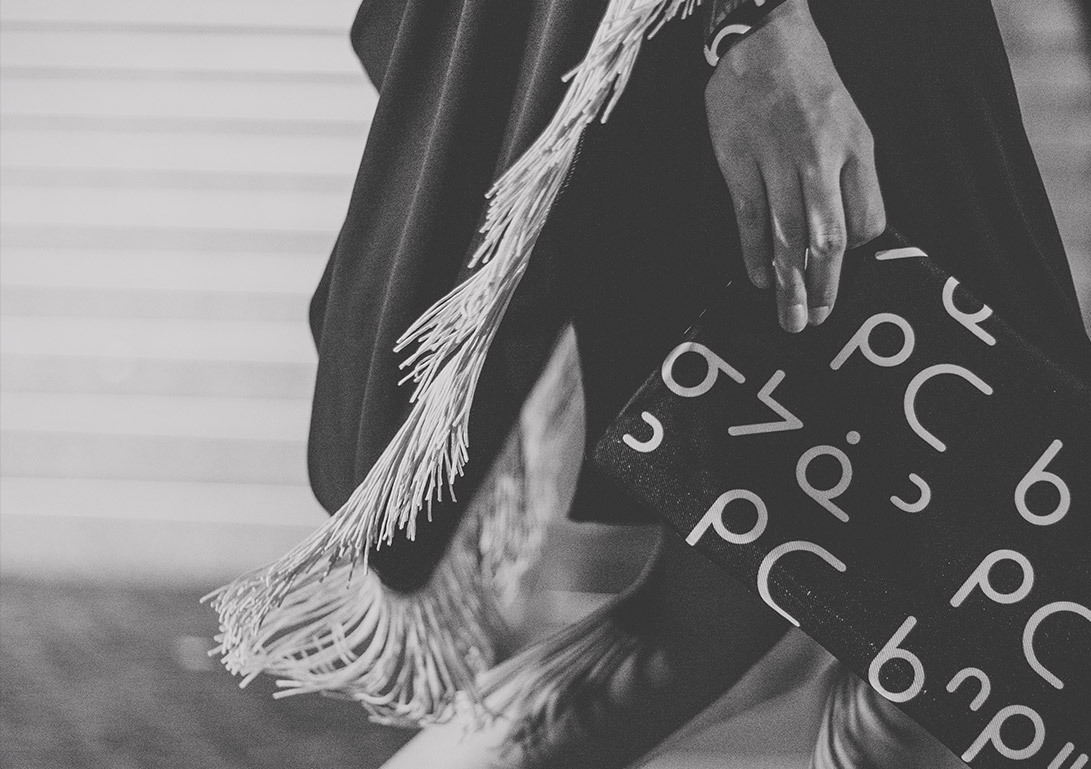 “We’ve got a website,” Derbyshire says. “We publish essentially couture lookbooks every year.

“It’s absolutely fabulous. Every two years, we actually go to Paris on a luxury branding study—and we promote the individual designers,” she says.

The project is still evolving, in ways Derbyshire hadn’t foreseen.

One of the most surprising, for her, has been the demographics of the designers and participants.

“The thing that’s most surprising to me, that I’ve personally observed, is the number of young men who come and sit and sew and learn about these things–and stay,” she says. “I have stood back more than one time looking at the people around the table doing the sewing projects with us, and just been really fascinated by the fact that there are lots of young fellows who want to know more—and do better.”

The other little victory?

Those brand studio students—who could have gotten busy any number of ways—were inspired to launch a small gesture of community-building that’s as healing as it is exciting.

“We really truly believe that the work of reconciliation is for neighbors,” she says. “And this project is how it’s manifesting right now, in these creative partnerships, business and entrepreneurial partnerships, and in this social innovation project that is using fashion and design as a platform for conversation.”