In the first half of 2021, Calgary Arts Development participated in the creation of an ecosystem report exploring Calgary’s creative economy alongside partners from Bird Creatives, RISE UP Calgary, Calgary Economic Development, The City of Calgary, and CityXLab.

Despite its significant economic, social, human, and environmental contributions to our region, Calgary’s creative economy is underleveraged and overlooked due to a creative ecosystem that is fragmented and inefficient.

What is the Creative Economy?

The creative economy looks at creativity as an output that intersects job fields, rather than isolated to particular industries. Adopting an ecosystems lens, the creative economy recognizes the connections between fields such as education, arts, culture, and innovation, rather than viewing them in isolation. It maps the interdependence of these as unique drivers of direct and indirect economic outputs.

Adopting this lens leads to a fundamental reassessment of the role creativity plays in areas ranging from education to industrial design, to organizational theory. We use the UK’s National Endowment for Science, Technology and the Arts (Nesta) view of the creative economy, which looks at creativity at the occupational level rather than the industry level. This allows us to gain a more accurate understanding of the economic role creativity plays and allows us to better understand how creativity permeates every industry, whether it is in medicine, oil and gas, or technology.

The Value of a Creative Economy

The value of the creative economy relates to how it contributes to the prosperity of the community and everyone who lives in it, which can be viewed across four interdependent dimensions: economic prosperity, social prosperity, human prosperity, and environmental prosperity.

Considering creative industries’ supply chain impact and wages that are reinvested into the economy, their economic footprint reached $3.85 billion in Calgary. This impact also resulted in $48.8 million in municipal tax contributions and $238.1 million in provincial tax contributions in 2016.1 These outputs, however, do not consider the economic impact of creativity across other industries. Sectors from oil and gas, to agriculture, to finance all depend on creatives for innovation and enhancing productivity: they are the designers, problem solvers, and communicators that support industries viewed as integral to Calgary’s economy. A city’s creativity and creative class are also essential for building a resilient economy, attracting and retaining young professional talent, and drawing greater business investment.

Creativity and the creative economy help create social value, contributing to overall community prosperity. They are tied to greater levels of civic participation, urban revitalization, community building, and social cohesion, which in turn can improve safety and security and further strengthen the economy.

At the individual level, creativity is essential to developing personal identities and self expression. It has been tied to greater educational achievement, improved mental health and general health outcomes, and better personal well-being. Within communities, creativity influences how we engage and relate to others through shared experiences, values, and cultural connections. On the job, integrating creative work approaches in the workplace is linked to an increased sense of value and accomplishment.

There is creativity in how we interact with our environment, and it will be a crucial component in achieving environmental
sustainability. Mitigating the effects of climate change and sustaining our natural environment will require investment in research and innovation to find creative solutions. The creative economy and creative occupations contribute the designers, communicators, and problem solvers needed to push development in a direction that balances our impact on the environment. 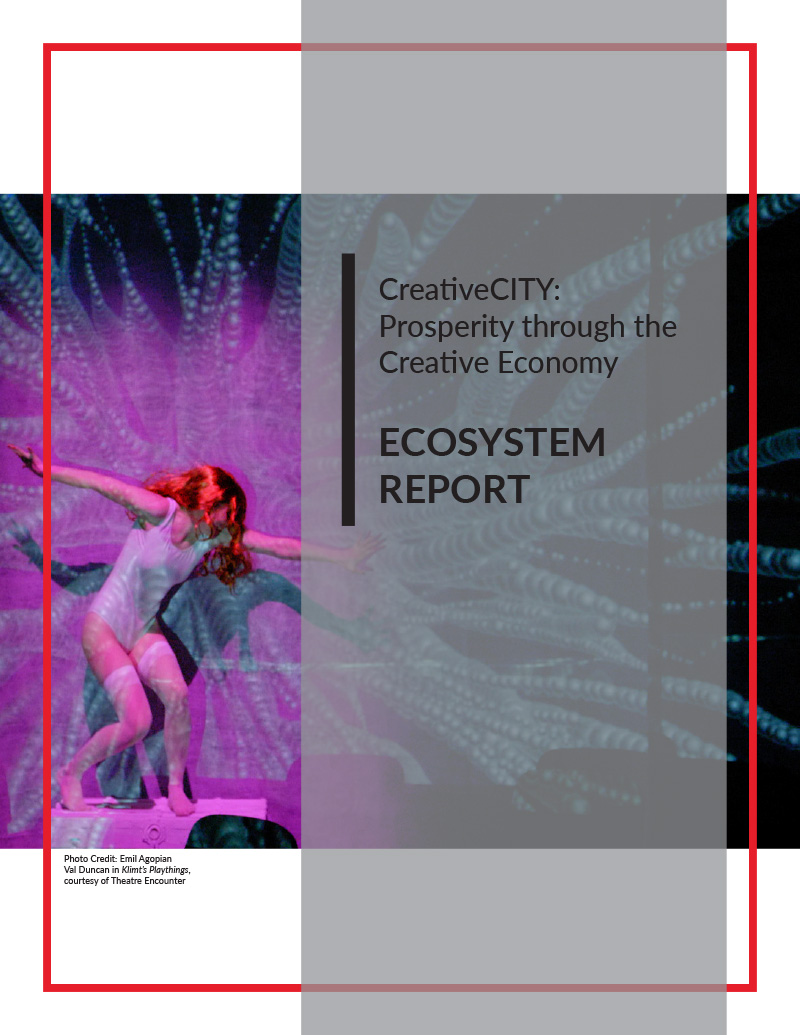