Here are three things you need to know about Rick Thomas…

1) The Calgary-based—not to mention born-and-raised—advertising agency owner didn’t learn to live a creative life from a book. He got it in part from his mom.

“[At dinner parties], she’d make little cards, hand done things, and place settings—things like that,” he says. “So I was surrounded by that growing up… by cooking, putting yourself into the food, putting yourself into the experience—and I don’t think she would ever say, well, I’m living a creative life. She just did creative things, around the house, all the time. Before there was a Martha Stewart!

“That’s the thing [about creativity],” he adds. “As soon as you start thinking about it, you’re not doing it. It’s something you do because it makes life better.”

2) Thomas is an unabashed believer in the transformative power of local life.

His client roster is filled with work done for such local non-profits as Imagine Calgary, the Calgary Foundation, Education Matters, the Trans-Canada Trail, Calgary Reads, as well as restaurants specializing in locally-grown food, such as River Café and Boxwood.

“It’s all about lifelong learning,” Thomas says. “The work for a client is a chance to learn something about our city, (and by extension) ourselves.”

Each one of them, he has discovered, rubs off on him in enlightening ways. Whether it’s discovering the joy of eating and preparing locally grown food as a direct outcome of working with River Café, being inspired to commit to early childhood development initiatives because of the passion for literacy embedded in the culture of Calgary Reads, or answering the call from Bankers Hall to create a Guinness World Record big pink ribbon to honour breast cancer survivors. Even something as seemingly simple as pulling together a team of artists and models for a fashion shoot is an opportunity for learning about diversity and inclusion.

3) He’s the guy who thought up the popular 3 Things for Calgary, part of the Mayor’s Committee for Civic Engagement.

“We had a meeting,” Thomas says, “and when the mayor would talk to audiences, he’d say, ‘There’s three things you can do about that.’”

The next thing the mayor knew, Thomas was suggesting that the Mayor’s Committee for Civic Engagement needed a name change.

“I said, don’t call it that,” he says, “because people will run screaming from it—they won’t even know it exists!”

For Thomas a huge personal turning point was working on Druh Farrell’s 2010 election campaign. That opened his eyes to the possibilities of becoming even more engaged in city life—in a creative way.

“To me, it’s about not being complacent,” he says. “As you get older, you start to have ingrained routines. Whether it’s a job or just lifestyle. Even when you move into a house, you put your stuff away—and it stays like that for decades practically, until you throw it away. Or move.

“But you never [really] go, ‘Do we really think this through in terms of how we function day-to-day?'”

And that tendency to drift towards default, habitual thinking extends beyond the personal to the institutional, he believes.

One area Thomas would like to see re-thought is education.

That’s partly because he and his wife, who have an eight-year-old son on the Autism Spectrum, are deeply invested in the education system, both personally and professionally. She’s a school council member who volunteers at her son’s school on Mondays and Wednesdays, while Thomas volunteers on Thursdays. 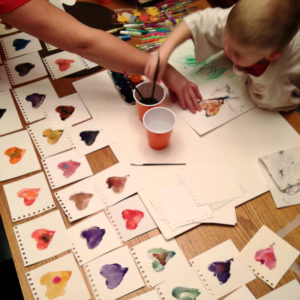 Thomas spent a year as part of Thrive by 5, a social innovation lab co-convened by United Way of Calgary and Area and the Ministry of Human Services, which gave him the opportunity to study innovative approaches to early childhood development (ECD).

“We went on learning journeys to different parts of North America,” he says, “to see how early childhood development issues were being addressed—and the whole idea was to figure out how to change that landscape.”

What he took away from the experience is a belief that Calgary needs to devise its own approach to early education, not borrow strategies from Scandinavia or anywhere else.

“One of the things we came up with,” he says, “was an insight about how the system views education and that that particular mindset was ripe for changing.

“The Ministry of Education and CBE (Calgary Board of Education) are all about kindergarten to 12—and yet almost 80% of the brain’s wiring happens in those first five years. If we looked at [childhood learning] as if it starts at zero, we would put more resources into affordable and accessible high quality childcare and implement the training necessary for caregivers to deliver it.

“That mindset has to shift.”

Thomas’s own sentiment shifted through his work with the City on the 3 Things campaign for civic engagement, as well as working with the board of Imagine Calgary, and people like community activator and friend, Meg Van Rosendaal, who has been a champion of the Olympic Plaza District as well as the emergence of Calgary’s Music Mile.

Those experiences taught Thomas that one of a city’s greatest strengths lies in the collective ideas of its residents—and that great cities, and great institutions, find innovative ways to tap into that to give people a voice and an outlet.

“How might you build your community with a 100 year vision?” he asks, before breaking the recipe down into three distinct things.

“Let’s build, and love, and thrive, and make it the best place in the world. Why not?”