Anyone who has spent any time around an independent theatre company knows there are few institutions better at stretching a loonie. So when the United Way’s Salimah Kassam set out to discover innovative strategies to talk about poverty reduction, it made a certain amount of sense for her to return to her theatre roots as a way of starting the conversation.

Working with a team of partners, including Momentum Community Economic Development, First Calgary, a division of Connect First Credit Union and Servus Credit Union, Kassam partnered with Downstage (in 2012 and 2013) and Swallow a Bicycle (in 2014 and 2015), two of Calgary’s top indie theatre companies, in order to produce several theatrical experiences and workshops as strategies in poverty reduction for our city.

The result was a unique blend of artists, bankers, social service staff and people living in poverty  coming together in order to learn from each other and create solutions that tackle difficult, systemic social problems, says Kassam.

“I studied theatre at the University of Victoria years ago,” she says, “and it’s awesome for me to be able to merge the two.”

Before she joined the United Way, Kassam spent several years overseas, where she launched drama curriculums at different schools in places like Tanzania, in East Africa.

She also used drama as a methodology to teach English as a second language in Hong Kong—she’s had plenty of experience living a creative life all around the planet.

“Using drama is a fantastic way to teach English. The two merge together perfectly,” she says. 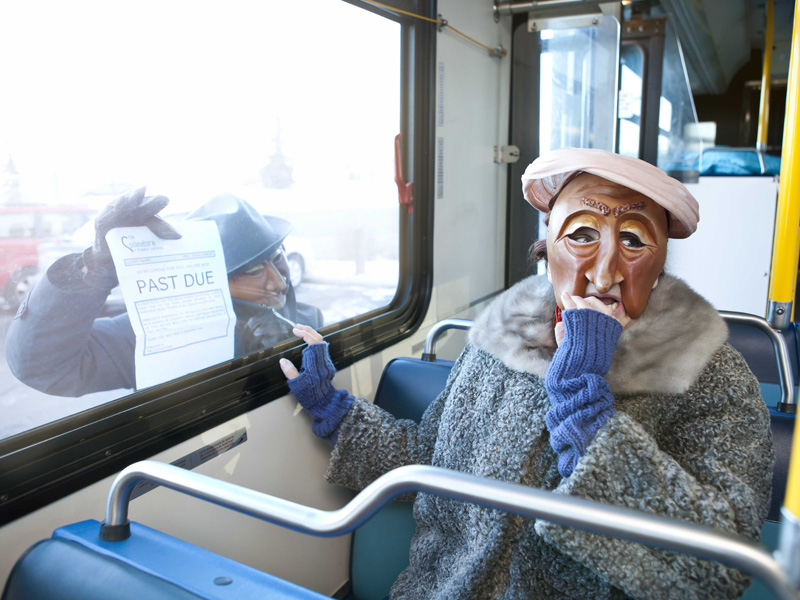 Back in Calgary in 2012, Kassam enlisted Downstage to create scenes that highlight the relationship between marginalized populations and bank tellers, creating a theatricalized version of an everyday experience that can be fraught with anxiety for all involved.

There are a number of modules in the Mutual Fun workshop series, each featuring different scenes that play out an interaction between a person in poverty and a bank teller—both of whom spoke their subtext, kind of like characters in a Woody Allen film.

What was the subtext?

“[With] every person it’s different,” Kassam says, “but it’s [basically] acknowledging that the bank teller has a quota to get more people signed up to credit cards, and to open more accounts to potentially earn more fees… [while] the subtext of the person on the other side of the counter may be not even understanding the role of credit cards, or trying to understand—is it a good thing or bad thing for me? Does this person have my best interests at heart? All that kind of stuff.”

In 2013, Calgary hosted a national conference on poverty reduction strategies that also featured a reprisal of a 2009 Downstage site specific show called Bus(t), a drama set in a post-economic crash nightmare world where all the broke people are forced by their creditors to work in labour camps.

In subsequent years, Kassam worked with Swallow-a-Bicycle, which devised scenes aimed at youth that explored young people’s relationship to debt, credit cards and the sorts of money problems those things can produce.

All of it is designed to ignite a conversation about our individual relationship to the money in our lives, in the hopes of breaking an intergenerational cycle of hard times, Kassam says.

For Kassam, her work blending the nonprofit world with the world of some of Calgary’s finest independent theatre practitioners, is one example of the ways in which thinking creatively can help organizations—and even cities hammered by an oil shock—find innovative solutions to seemingly immovable obstacles. “Art is such a great tool of conversation,” Kassam says, “and it’s such a great tool of culture shift. So if we need deeper conversations on oil and [the] environment and strategies for moving that stuff forward, then why not engage your artists who are often synthesizers of thoughts and ideas and excellent communicators, to help in those conversations?

“That provides more work for talented people,” she says, “who should be part of that conversation anyways—because the way they can help shape conversations is in-valuable to all of us.”