Sam Hester is so creative, she can transform a concussion into an imagination opportunity.

The Ramsay-based writer and artist—and occasional goalie mask artist—recently had an unfortunate run-in with the trunk of her car and her head, causing her doctor to advise her to stay away from all screens until her head injury healed.

That’s a pretty tall 21st century order for anyone—no tablet, no laptop, no phone—particularly Hester, an information junkie and artist and mom who’s as over-reliant upon technology as the rest of us.

What Hester discovered, when all her distraction portals were temporarily shut down, was that it gave her back her ability to focus on her own creative projects, which had sadly been put on the backburner in recent years, thanks to life happening (the birth of a second child, a bout with post-partum depression, and a mother battling Parkinson’s Disease).

“It’s been crazy not to get to look at a screen,” she says. “I’m kind of okay with [looking at] my phone—I can look at it and send a text, but to look at a computer screen really messes with my head, so it’s been a cool experiment [to live screen-free].

“[Instead of screen-gazing], I’ve just been thinking about all my old writing projects,” she says, “and comic projects that [in recent years], I just never give myself permission to think about—because they’re just so non-lucrative and just-for-fun.”

A prominent Ramsay community activist and yearly Calgary Comic Expo exhibitor whose animated blog was featured in the Calgary Herald in 2013 and 2014, Hester found herself retreating from the world following the birth of her second child.

Struggling with post-partum depression, Hester decided to write about it in her comics.

“I felt like, I hope this isn’t going to sound like, feel sorry for me,” she says, “because I really am not aiming for that.”

That particular comic was included in the Calgary Expo Artbook, a juried souvenir book that is sold at the Expo every year.

“I thought, is this the right subject for the Calgary Expo Artbook?” she asks. “But I also thought, Calgary Expo is the place where you’re supposed to air that secret side of yourself that you can’t talk about at work…so this [post-partum depression] was just my version of that.”

By putting the experience into illustrations and words, Hester was able to put some distance between her and her depression.

“I realized,” she says, “that at the end of my little story, whatever happens, however I get through it, comics will have to be part of it. Comics are a way for me—a therapeutic way—of helping me get through it myself, and turning it into something that I can kind of measure and get my head around.” 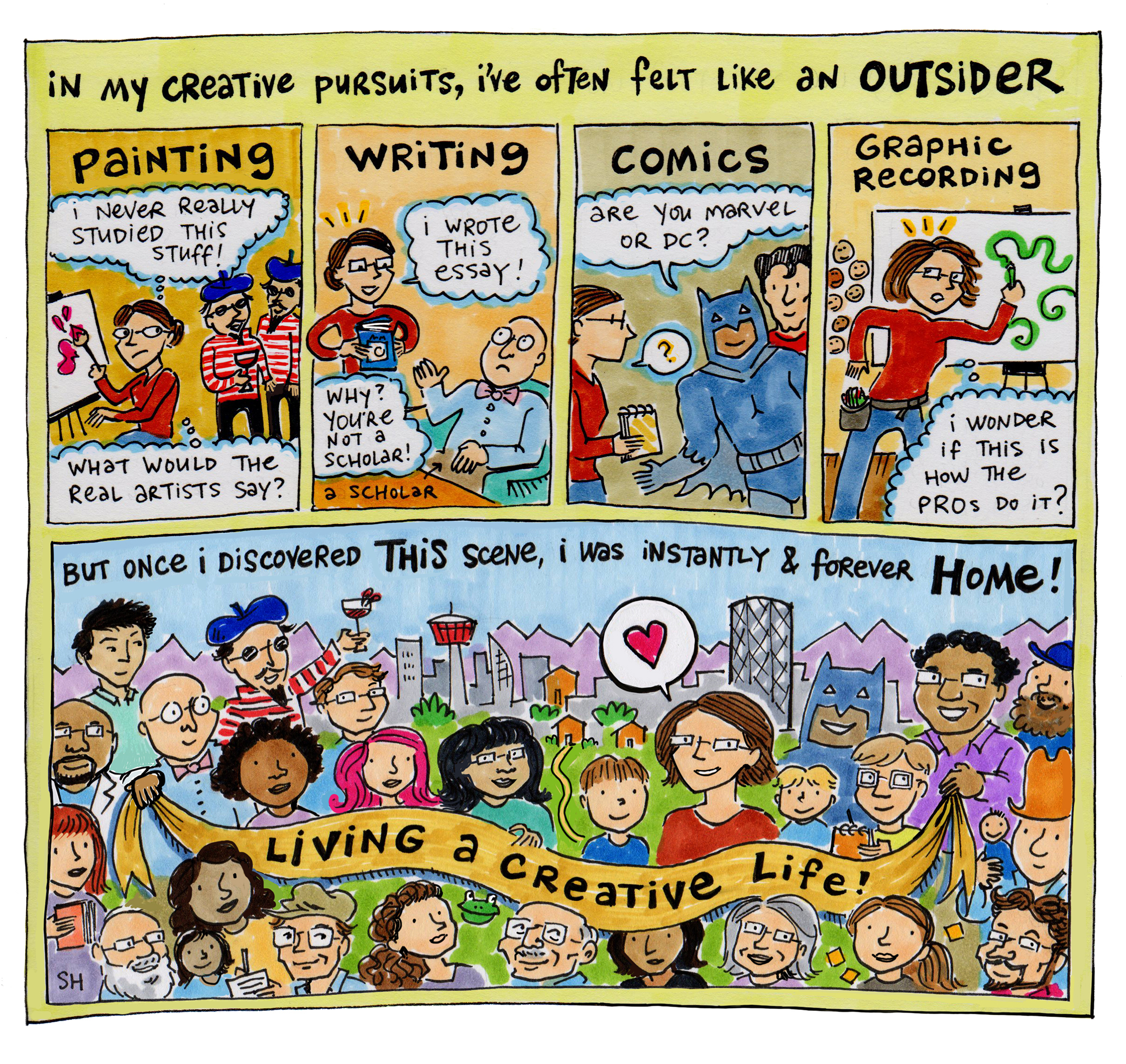 What comics weren’t—and rarely are for most artists—was a viable way to earn a living.

That part of Hester’s life was spent working as an Air Canada flight attendant, for over a decade.

It seemed to Hester that Air Canada was going to be her life-long money maker, until one day, back in 2012, when she stumbled into a job that combines her reportorial instincts as well as her creative ones.

That’s the day she learned about graphic recording, which is a kind of visual diary of an event, like a conference.

“It was meant for facilitators who want to incorporate visuals into their work,” she says. “You don’t have to be an artist. In fact that’s the whole point: it’s not about art, it’s just about the use of visuals as a learning tool, or memory tool, when you’re doing any kind of work.”

After attending a workshop that (serendipitously) took place next door to her young son’s preschool, Hester attended a graphic jam hosted by the City of Calgary.

Soon, her services were in demand, by a wide assortment of organizations and non-profit agencies.

“Government, corporate, non-profit, educational organizations,” she says. “Healthcare organizations, too. Everybody who’s having an event, who want people to come learn and be engaged.

“People are realizing how visuals and pictures could be a learning tool,” she says, “rather than a distraction from learning—so it’s so crazy—and it’s really popular in some parts of the world, but right now in Alberta, there’s almost no one else doing it [except me].”

And along the way to stumbling upon a creative way to pay the mortgage, Hester has discovered a whole new definition of what constitutes a creative life.

“The creativity in my life,” she says, ” is mainly in the balancing between the different things you’ve got to do.

“It’s just as creative to juggle [raising] your kids and [doing] your creative work and [attending to] your elder care and stuff, as it is to sit down and paint a beautiful picture. That’s the creativity I think I mostly apply to my life,” she adds. “The balancing act.”

As far as Calgary’s own efforts to find the balance between its creative and work lives, Hester thinks we’re doing a pretty decent job of it.

“Calgary already seems to be doing a really good job of having an awareness of [using creativity] as a fundamental part of [everyday] life,” she says. “It’s not just seen as a frivolous extra [that] you do after you’ve done the basics of earning your money. It’s right there at the beginning.”