It all started at one of the most prestigious film festivals in the world.

“Two years ago at the Cannes Film Festival I connected with the Adam Beach Film Institute based in Winnipeg and that was how this all got stated,” explains Calgary writer-director Benjamin Ross Hayden. “The Northlander has taken many different forms in its development but it was through the Telefilm Canada’s micro-budget program, triggered by the Adam Beach Film Institute, [that] this project occurred.”

At 25, Hayden was the youngest filmmaker to ever receive funding through the micro-budget program and used it to create his first feature. The Northlander, a visually stunning and Alberta-shot science fiction film, makes its debut in Calgary theatres this week.

The year is 2961. Society has fallen and nature has recovered the land. A post-apocalyptic narrative with an Indigenous lens, The Northlander follows hunter Cygnus (played by Corey Sevier) as he is called upon to travel across the treacherous landscape and defend his people.

Sparked from Hayden’s own questions about his Metis ancestry and the Indigenous tradition of traveling across great distances, The Northlander, is driven by the need of self discovery.

“My interest [was] piqued [by] a people discovering their identity,” Hayden explains.

This included the story of Metis leader Louis Riel and his journey towards the Montana mountains where he became a trader and interpreter.

“It led my story to become a fantastical and thematic representation [of his travels].”

Shot in Hayden’s own cinematographic style—a highly visual form of storytelling that’s wrapped around heavy production and costume design—the theme allowed him to create a new way to convey the character’s emotions.

“When exploring a totally different culture in a different time, I felt liberated as a filmmaker to explore the dramatic art form of cinematographic storytelling,” he explains.

Utilizing breathtaking visuals, The Northlander was shot using the Alberta Badlands as a stark background.

“The landscape itself has become a character by virtue of where the characters are emotionally at the time the movie takes place,” Hayden explains. “Specifically the river [was] used to establish a nomadic tribe called Last Arc and their movement in a particular biome of Canada. The edge of the boreal forest, reaching in towards the hostile badlands, the land is transforming and changing and mutating even. It’s personified through the scars and mutations the characters of The Northlander are adorned with on their skin.” 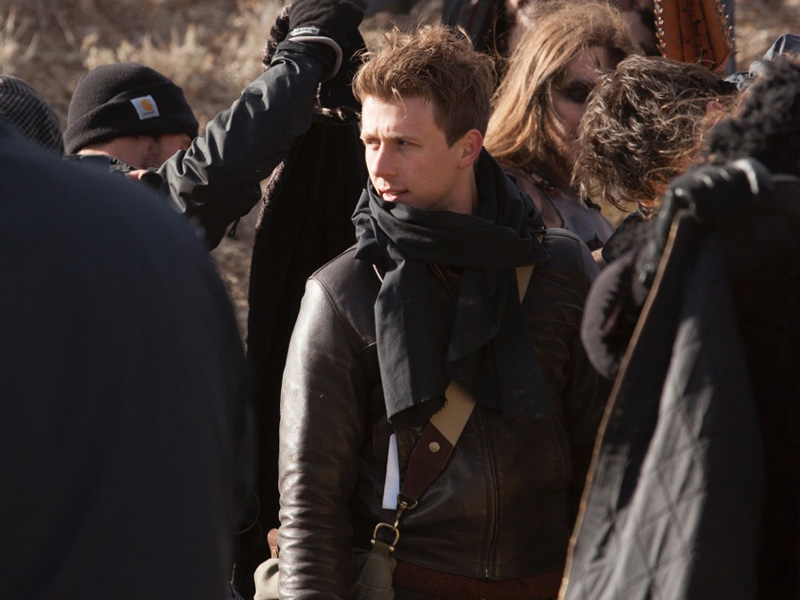 Coming full circle, Hayden returned to Cannes this past spring to debut The Northlander as part of Telefilm Canada’s Perspective Canada.

“This year The Northlander was the first Telefilm micro-budget feature film ever selected for the Perspective Canada program. This program celebrates the best of Canadian feature films each year and it was a true honour to engage and connect with the international film industry,” says Hayden. “The contacts we made there surfaced into an international sales agent, Spotlight Pictures, and our Canadian distributer Raven Banner. Then, subsequently, the Landmark Cinemas commercial release.”

That deal will see The Northlander released in 10 Canadian cities next season including a weeklong run and two galas in Calgary this October.

“It’s like a homecoming,” he says. “I had spent the last year working so closely with this region in producing The Northlander and finding the cultural sensibilities in the film, [I want to] celebrate with the cast and crew and share their proud achievements.”

“It’s nice to know that Calgary is proud of its own,” he says. “That support meant a lot… especially in terms of representing where I come from. It was a nice reminder at a nice time.”

As for what’s next for Hayden, The Northlander has a bright future with a deal in the works to create a television series for Aboriginal Peoples Television Network. He’s also working on his next feature film, The First Encounter.

The Northlander has been held over and now runs October 12 to 26, 2016 at Landmark Cinemas Country Hills Studio 16 (388 Country Hills Blvd. NE) with two opening galas slated for October 12 and 13.