Tim Kitchen’s creative life started a long time ago, when he had to figure out how to go back to school.

The long-time resident of—and champion of—the historic Calgary neighbourhood of Sunnyside, Kitchen didn’t enrol in university until he hit his late thirties, at an unconventional college in Vermont called Goddard.

“They offered a multidisciplinary project based approach to education,” he says, “where, in the end, I wrote a thesis as my final product, but it took me five years to get through that. I completed it in my early 40s, so I was late to the game when it comes to academic [achievement].”

Now, over a decade later, Kitchen still works for Husky Energy, in corporate strategy and planning. One of the roles he has taken on is bringing together disparate leaders within that huge company together to re-imagine the way they do things—sort of the way every energy company has been forced to do since the oil shock of 2014 landed.

“I work with group of about a dozen diverse leaders,” he says. “[It] sounds unusual, but it’s what we call critical competency networks. My role is to facilitate the competency network leadership to innovate and create value… to work with those groups—the leaders—to continually question what is working.

“And once they understand what works for them,” he says, “they are encouraged to share it broadly [within the company]. How are they fostering innovation? Where is collaboration working? How are we connecting people and technology? How is value being created?

“How do people collaborate within a community and communicate with one another to create something of value,” he adds. “The heart of it is creating opportunities for people to interact and bump up against each other.”

What makes Kitchen’s life truly creative is that he has taken the same skill set that served him so well at Husky and put it to use outside the office as well, over the past 15 years, most of them connected to helping build Sunnyside and the Kensington area into a community that’s as innovative, progressive and dynamic.

He is full of notions of how Calgary could better serve as an incubator for small business, local agriculture and neighbourhood preservation—a community builder, husband and dad (2 daughters, one is an aspiring actress, living in Los Angles the other is attending high school) Tim also loves to create artworks out of wood in his spare time.

All of it was mere prelude, however, to a compelling side gig that Kitchen has undertaken with his neighbours, that combines local food production with an idea that just might change the way the rest of Canada thinks about Calgary.

He wants to make Calgary an urban cider making mecca, using fruit no one wants, that already grows in our yards and orchards. 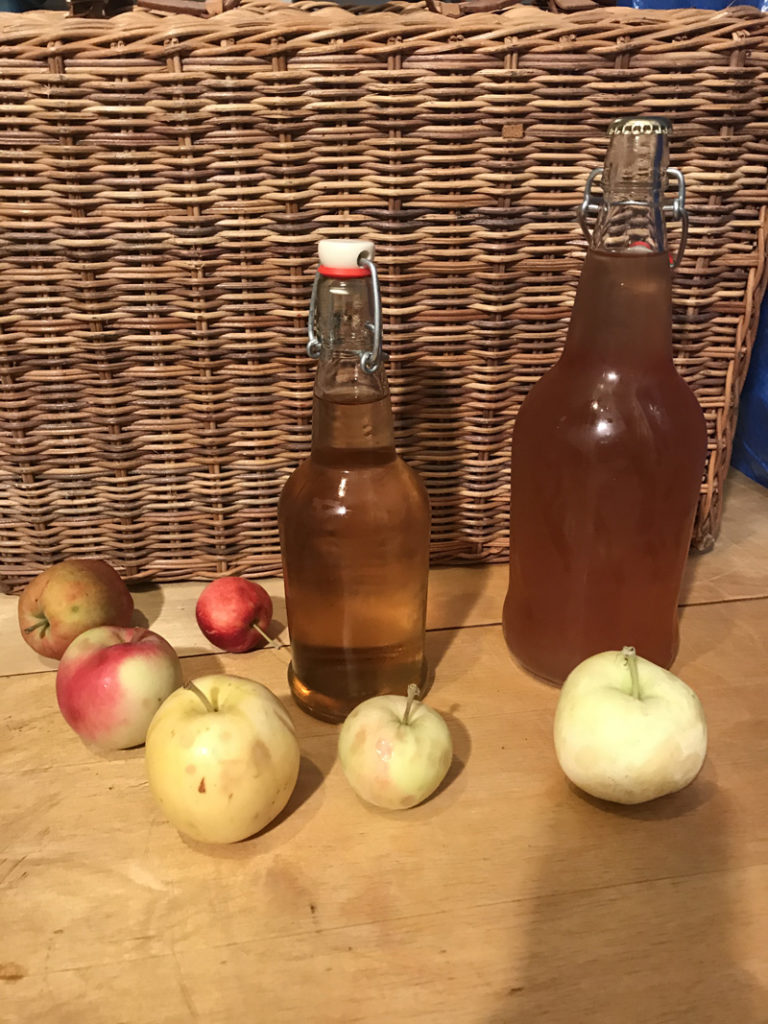 A 1 litre bottle of 2016 of Mind the GAP Ginger Apple Pear and 500 ml of 2016 Perry (Pear Cider) a few variety of apples from this year’s harvest | Photo: Courtesy of Tim Kitchen

The idea stems started several years ago, the City of Calgary added an orchard to the Sunnyside community as a pilot project, which turned addressing the question of what can be done with the harvested fruit..

That appealed to Kitchen’s belief that we all need to get in better touch with where our food comes from.

“It’s the notion,” Kitchen says, “of growing your own food, having access to locally produced food,  knowing where it comes from—and being able to store it and in some cases sell it.

“We’re so bound by what the grocery stores bring in from around the world,” he says, “and in some ways, we are losing our cultural heritage around food, the growing of food, food practices and food preparation and storage.”

Inspired by the popular revival of the farmer’s market at HSCA, Kitchen recruited his Sunnyside neighbors to put some of the neighborhood fruit to use.

“I went out,” he says, “and bought 800 pounds of apples from a local vendor and invited all the neighbours over and we made applesauce and apple juice and we experimented with making apple cider as well.”

That was a few years back.

While it was fun to recruit the neighbors to pummel apples into sauce and juice and cider, Kitchen also understood it wasn’t terribly efficient or sustainable, from a recurring free labour perspective.

But instead of folding his apple tent, he upped the stakes.

“I keep thinking, how can we improve this? A couple years ago, I went out and bought a major juicer,” he says. “It holds about 50 litres of apples—mulch—and produces 15 – 25 litres of juice with each batch. Last summer, I built a walk-in cooler in my garage, and got real serious about my hobby.”

While Kitchen learns the ins and outs of making commercial-grade cider, he scours the neighbourhood each autumn for an astonishing array of home grown fruit. So we now have a process in place where fruit, juice and cider are at various stages maturity. At the moment we are full on harvesting fruit.

“All the fruit used is harvested locally, off trees no one else is picking,” he says. “We find them in public places—or people’s yards, where folks in most cases are just happy to have someone come remove the fruit for them, so they don’t have to clean it up after it falls.

“There’s at least a dozen varieties of apples in Calgary,” he adds, “several varieties of pears, and saskatoons as well as many varieties of cherries. One of my favorite ciders is a saskatoon [berry] and apple combination. I love experimenting with a variety of yeasts, and a variety of fruits to see what we come up with.”

What Kitchen hopes to come up with, is the first truly urban cidery—SunnyCider.

All of which turns the question to parallel cities that have re-invented their municipal brand over the years, such as Portland, which has transformed itself into a walkable mecca that’s a kingdom of craft brewed beer.

It turns out Kitchen has been paying attention to the Portland Oregon parallel as well—and notes that it isn’t a coincidence that that city became famous for its craft beer.

They have built it into their cultural fabric—and Kitchen says there’s no reason why Calgary and Alberta couldn’t become known as much for unique urban agriculture products as we already are for our energy industry.

Throw in a healthy, entrepreneurial Calgarian sense of the possible and you get SunnyCider—coming soon.