If Antyx Arts was a household item, it would be thread.

Only instead of stitching together fabric, the Forest Lawn-based community arts company uses the tools of creativity to stitch together a community out of a lot of young people who may feel alone.

He studied theatre years ago in Regina, where he fell in love with the way theatre creates community, and connects a lot of people who feel like outsiders while simultaneously providing them with a variety of skills—oratorical, presentational, performative—that have as much use in the real world as they do in portraying imaginary ones.

Rather than chasing roles—he says he’s a ‘bad auditioner’—Campbell took that skill set and applied it to helping challenged communities find their own voices and tell their own stories, in Regina, then Toronto, and eventually Calgary.

“Our strongest and most powerful outcome is often building connections for kids and community members who don’t have a lot of connections,” Campbell says.

“We try, for our work, to engage kids who are feeling marginalized. Often it’s a sense of being with somebody in a group where people are listening to them and discovering that their voice matters—that makes the biggest difference in their personal development.”

The company’s community arts strategy involves developing collaborative projects that can take many forms—photography, theatre, hip-hop, or constructing Pillars of Humanity—a quartet of large sculptures to display in the Genesis Centre in northeast Calgary.

“It’s a fascinating place,” Campbell says. “I love being in the Genesis Centre, in the courtyard area.

“It’s such a hugely diverse population that uses the place—such an active place and in the middle there could be kids break dancing—you never know what’s going to happen there.”

Antyx looks to work with a variety of other non-profits and community groups. 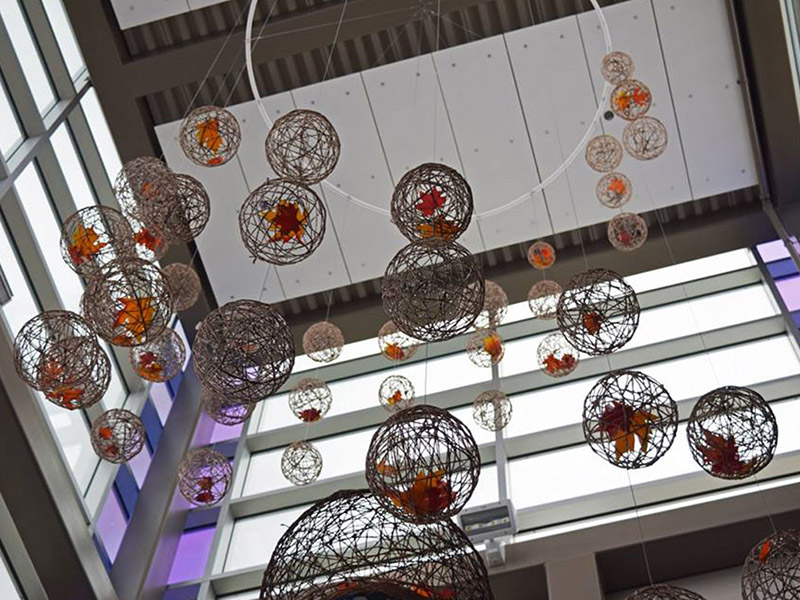 At the Genesis Centre, Antyx works out of 1000 Voices, a community hub that includes a collection of 30 different non-profits and 30 different community groups providing support and searching for connecting threads.

“At 1000 Voices, we make connections with other youth serving agencies to find ways of getting kids more involved,” Campbell says, “whether it’s a project or a long-term program. The Boys and Girls Club, YMCA, Aspen Family and Community Network—and other community groups have youth components as well.”

That led to the sculpture project.

“Team North, our Youth Art Action Group created four mobile sculptures for each of the four corner towers inside the Genesis Centre,” he says. “They’re huge, and they’re hung from the top of the towers—I think 45 feet up, maybe more than that—but they created four mobile sculptures that reflect the four seasons, along with the themes Dreams, Diversity, Resilience, and Mental Health. So each sculpture has a seasonal theme and also reflects the thoughts and feelings of what those words represent.”

Who were the sculptors?

“Most of the group go to Nelson Mandela High School, which is right next door to the Genesis Centre,” he says. “What was interesting is that the sculptor group was all girls—all young women—most of them are immigrants or first generation kids—they were a very keen, hard working group.

“I think two or three of them are going to be vying to be a future Prime Minister!”

That is not necessarily the typical profile of an Antyx kid, Campbell says—and he’s just as happy to work with kids who are struggling to answer the question young people ask more than any other: Who am I?

One of those youth that Campbell says stands out in his memory was Zach (name has been changed for privacy), a young transgender individual who connected with Antyx at a difficult time in his life—although that wasn’t necessarily what got him through the door the first time.

“He came to his first Antyx session because a counsellor told him there would be pizza,” Campbell says.

A few years ago, Zach was invited to join Antyx’s Youth Arts Action group, which was doing a sculpture project called Water Ways at Phantom Wing, which involved creating art installations at King Edward School (before its transformation it into cSPACE), using found objects from the 2013 flood, like old wood, and other random objects.

“[Zach] worked on that and the next year helped create a mobile playground in our Play on Wheels project,” Campbell says.

“And in the year they were doing the Water Ways sculpture, Zach and a couple other people who were core to the group, were really challenged when new people came in and joined the group—like they were almost protecting their turf,” he says.

But as much as they experienced some negative emotions trying to incorporate the arrival of newcomers, they also recognized those emotions—and did something about it.

“When we did the Play on Wheels project next… there was a growth he and the others had,” Campbell says, “and they started to feel more open to others.

“They were so welcoming, inclusive, and provided mentorship to the new kids.”

These initial projects led to Antyx working with Zach on a video project for his school GSA (Gay Straight Alliance).

“We did a video project that was part of a social media campaign called #SafeAB—about how every kid deserves to be safe in their school—and he took a real leadership role there,” Campbell says. “I even think he helped CBE with some of their policy work on inclusion around how school space can be safer for transgender kids.

“So he found a place there where he could be accepted and learn skills. He became a great public speaker—and really came into his own.”

It turned out that Zach had a core sense of himself that only needed a structure from which to emerge, while many other kids come to Antyx looking to find real sense of who they are—at times they may have trouble connecting with other people and being heard. By participating in one of Antyx’s artistic collaborative efforts, whether it’s sculpture-making at the Genesis Centre, a documentary video about food instability, or a play, many kids can find that sense of self and belonging.

“It feels like we’re giving them a time and space to develop what they don’t believe they have—are they going to be successful, or drop out and fall off the rails?

“A lot of the time,” he says, “it’s inspiring to see the kids stay involved, discover something about themselves, and use their new found skills to start to make connections with others and create something positive for their community.”