ABCD
The Storytelling Project
May 9, 2017

It’s a massive physical, emotional and psychological adjustment to transition away from the gender you were assigned at birth.

What makes quantitative researcher—and lifelong, passionate choir member—Ari Agha’s transition even larger is that their voice must transition too—in a way no one can quite predict.

That means waking up a year from now to a voice that may or may not be conducive to singing out loud—for someone whose whole life and community has been shaped around singing.

“I’m almost 40 now,” Agha says, “and singing is something I’ve been doing really since I was 9 or 10. Every place I’ve lived, that’s where I’ve made my connections. I’ve made my best friends singing. No question.

“There really is something incredibly unique about coming together with people to do this thing that’s just—it’s impossible to do it alone,” Agha adds. “You are so intimately connected to these people. In some of the choirs I sing with, I don’t even know the names of most of the people I’m singing with, and most of the time, that doesn’t matter, because just by the fact you’re singing together in this group for however many moments that is, you’re connected.”

A quantitative researcher who grew up Miami, attended grad school in Pennsylvania, and spent a decade working in Washington D.C., Agha relocated to Calgary in 2014.

Agha blogs at genderqueerme.weebly.com about their transition, and even utilizes creativity in formulating research reports, but it quickly becomes clear that singing is the hotspot—the life force—that fuels Agha, even though research is what pays the bills.

So what would you do if you had to choose whether or not to undergo life-changing hormonal treatment—they call it “T”, for testosterone—knowing that one of the transformations you’re about to go through might be one that robs you of your greatest pleasure?

The first thing to do—apropos of Agha’s day job—was check the research.

The problem was, there wasn’t much of anything that had been done about the impacts of hormonal therapy on vocal range.

“Just in the last 10 years, there’s been some empirical research on how T affects speaking voices, so things like fundamental frequency, and whatever—how does it change—but there’s literally [only] been two or three articles published about how it changes singing voices in particular.”

That’s when Agha did what the non-researchers among us do whenever life throws an unknowable at us: Googled it.

What Google returned was a lot of individual case studies—some bad, some good—about how voices change for transitioning singers.

“There are people,” Agha says, “who are like, I transitioned, I had no problem, I was a soprano, now I’m a baritone—whatever.

There were also stories about transitioning singers whose transition left them unable to warble a note.

Ultimately, after working with a voice teacher, Laura Hynes from the University of Calgary, Agha decided to take the plunge and begin testosterone treatment—even if the outcome on their voice was utterly unknowable.

“[Hynes] was really, really critically important,” Agha says, “in helping me process and think through what I wanted to do and how I wanted to do it.

“In addition to being a phenomenal singer,” Agha adds, “she’s a great teacher, and has an amazing, amazing ear—and so I was confident that as I was transitioning, as I was changing, she could hear if something was weird and help me figure out how to respond to that.”

Beyond the potential vocal change, there was little doubt about what to do.

“Essentially,” Agha says, “it felt like I didn’t have a choice. I couldn’t continue to go on the way that I had been.”

Agha was five months into testosterone treatment when they spoke to The Storytelling Project, which it turned out, happened on the cusp of a vocal milestone.

“[It] was literally two weeks ago,” Agha says, “that I first noticed the change in my singing range. I had been waiting for five months and my [vocal] range hadn’t changed at all—and [then] I gained a half a note in my lower range.

“It’s half a step— nothing major,” Agha says, continuing. “But something changed. And it was just so huge—it was [like] oh my god, something is finally happening!

“It felt so awesome.”

Agha remains dedicated to living a creative life, whether it’s through singing, blogging, or even working on a new project—compiling the data on their transition so that the next time a singer wonders how gender transitioning impacts a singing voice, there will be a little more research available.

At the same time, Agha is also working on a theatricalization of the experience, utilizing choral music (and quite possibly enlisting members from a few of the choirs Agha sings with, including Spiritus, One Voice Chorus, Double Trouble Ensemble, and The Essence of Joy Alumni Singers choir back in State College, Pennsylvania)—as well as incorporating film, animation, and text. 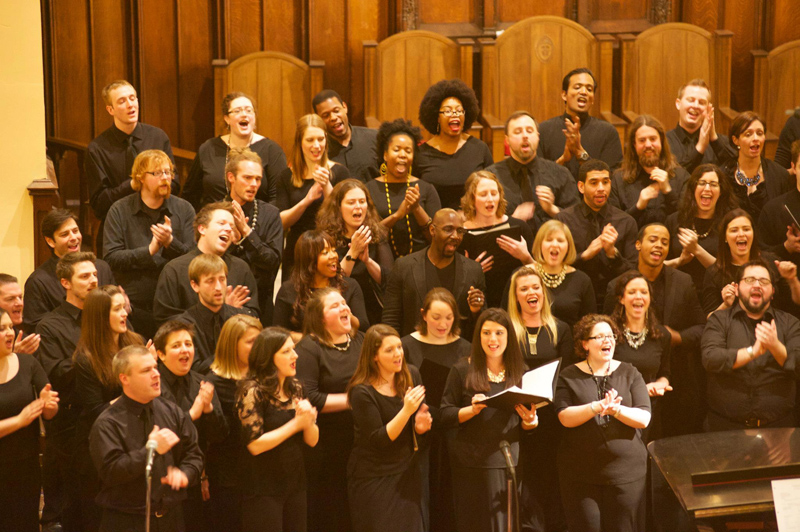 Why live a creative life?

“The easiest answer,” Agha says, “is it’s fun. It’s just more fun to be creative. Even when it’s really hard work—like singing with Spiritus for instance. We don’t have a good time at rehearsal. I mean we have a good time, but that’s not the only thing we do. We work really, really hard.”

That challenging, joyous, social, group work impacts Agha’s life at a number of different levels too.

“Being creative is just transformative,” Agha says. “When I finally finished that blog piece on T, I was absolutely different afterwards. I had gained a new way to think about and understand it—and singing—absolutely.

“You are changed from doing it.”

What’s great about singing in a choir, Agha adds, is that everyone around you is changed from it too.

“I feel weird saying this,” Agha says, “because I haven’t read the research—but apparently they have done research and have learned things like, people’s heartbeats and breathing synchronizes when they sing together.”

How they’ll sound once the hormone therapy is completed, in about 12 months, is still unknowable—but Agha has every intention of continuing to sing, no matter what.

“I want this change. There’s no question but at the same time, it’s a loss and it’s kind of scary—and I don’t know how I’m going to feel about the new voice.

“So what’s it going to be like, to hear the new one? It’s a work in progress,” Agha says. “And we hope to be able to tell a compelling story about it.”