Four decades ago, Bud Edgar went to the Jubilee Auditorium to see the Nitty Gritty Dirt Band. There, he discovered an opening act comic who changed his life.

“The guy who opened for them,” says Bud, who was then an architectural drafting and building development student at SAIT, “was Steve Martin.

“He wasn’t very famous,” Bud continues. “He didn’t even have an album out yet. But he was hilarious. He blew me away. I remember more about what Steve Martin did than the Dirt Band. He was just mind boggling.”

What Martin was back in the late 1970s, was an up-and-coming wild-and-crazy guy, who performed magic tricks in between telling jokes—particularly juggling.

That juggling stuck in Bud’s head, on nightly walks with his dog, which usually involved a pit stop at the park for the dog, and a smoke for Bud.

One night, Bud decided he wanted to quit the nightly cigarette and knew what he needed was a new habit.

“I thought, I want to get some juggling balls,” he says. “I went to this place called Frank’s Joke Shop and bought these W.C. Fields juggling balls.”

Bud taught himself to juggle. His brother had a unicycle that he never used, so Bud borrowed that too, and taught himself how to ride the unicycle. Then, he learned some comedy bits, which he would showcase at a friend’s house, until one day when she gave him a clown suit and he asked if he could perform at her son’s birthday party.

That was when Buddy the Clown was officially launched—and Bud Edgar the construction guy switched fields.

To get experience for his newly-born clown show, Bud would perform at daycares for a very affordable price. He learned to do the makeup and chose outfits with a little help from his wife, who also picked up a few clown tricks herself, to go with her natural affinity for ventriloquism.

One day, he saw an ad promoting a clown school in Leduc.

“I phoned,” he says, “and asked if I could come to it and they said oh what do you do? I told them and they said, do you want to teach it?

“These guys had unicycles,” he says, “so I taught unicycles, juggling, and clown bits and skits.”

The only problem, it turned out, was that he also had a few gigs booked during the period he was teaching at the clown school, so he spoke to his wife and the two of them arrived at a solution.

“My wife did the other work,” he says. “She started clowning too!” 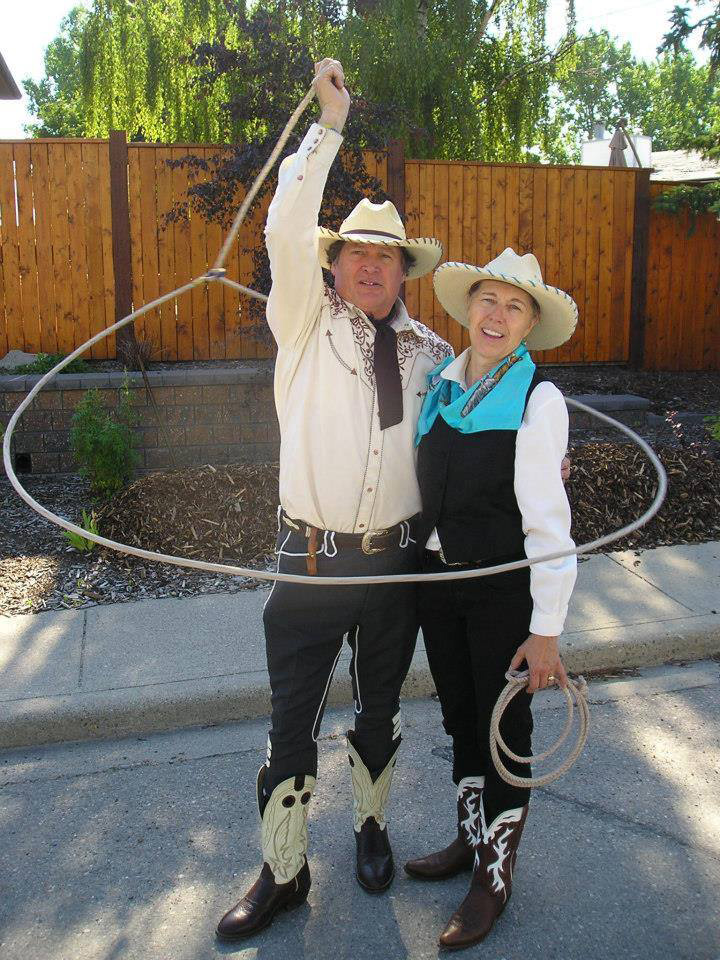 Sheila and Bud later attended both clown school and a variety art school in the U.S. twice and they later returned to teach at the variety arts school, twice.

That was the start of a clown family that has continued to work for the best part of three decades, at various events around the west—festivals, the Calgary Stampede, Exhibitions,  and once at the launch of a water park—in Dubai.

Bud now has three different shows—Buddy the Clown (since 1983), Bronco Buddy (since 1985), and Bud Edgar, Joker & Trick Roper (since 2005)—and has been performing for over three decades.

His wife is Button the Clownette, (with makeup), or Sheila Edgar, comedy cowgirl (without makeup)—performs with “Monkey,” combing trick roping, clowning, and ventriloquism.

The two-clown household produced a third, daughter Amy Edgar, who is a stand-up comedian.

“Some of my earliest memories are of my Dad getting me to say punchlines on cue,” Amy says, in a 2015 interview posted on Elizabeth Scott’s othergirls.wordpress.com. Amy performed with her parents, until she hit grade six. “My dad would listen to comedy albums in the car. I would memorize monologues and recite them to friends and family.”

And now that she’s an adult, what does Amy remember about growing up in a house with two clowns for parents?

That included having one parent or the other perform at her childhood birthday parties every year, until one day when she was 10, and her mother let her know it was okay if she wanted to do something else for the next birthday, rather than having her friends be entertained by her parents.

“I was like, great! Can we just go bowling?” 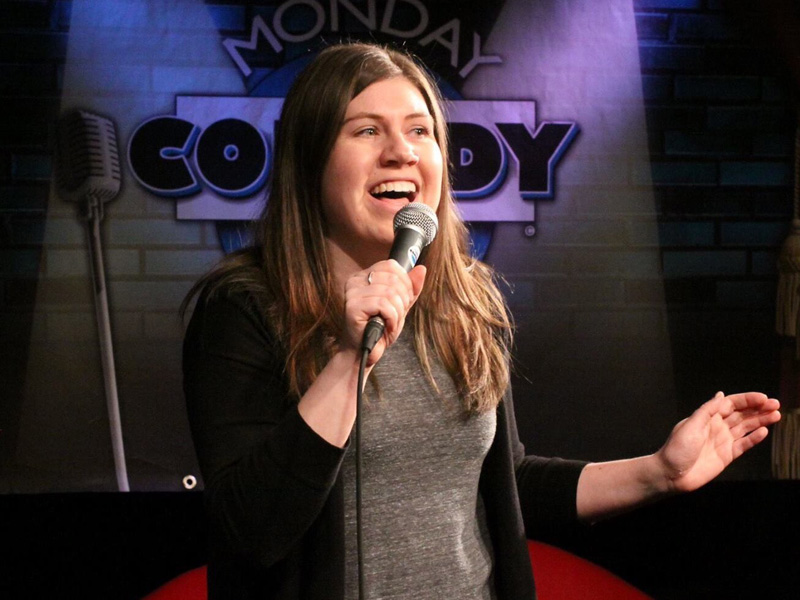 Amy has incorporated her parents’ lives into her stand-up routine, because—well, because it’s good material.

“People can relate to parents being embarrassing,” she says, “and having clown parents is just next level embarrassing.”

So, why does this family strive to live a creative life?

“There’s so much variety to it,” says Bud, “and so many rewards to what I do. Like now, having done it as long as I have, I actually do parties for people who have kids—and they’ll show me their memory book—and I performed for them when they were kids!”

There are so many great memories. There have been different years performing at the Calgary Stampede, for starters. There was also the opportunity to fly first class across the planet, like he did to work the opening of that Dubai water park. There are occasionally goosebump moments too. There was the roping convention Bud attended at the Will Rogers Ranch in California, where he met a few trick roping icons, like Vince Bruce, Montie Montana, Rex Roper, and Sylvester Braun.

Then there was the time Bud found himself hanging out in the lobby of the Palliser Hotel after performing at someone’s birthday party there.

“I see this guy at the top of the steps,” Bud says, “and he looks familiar. Who is that guy? I think. It turns out to be Gregory Peck. And guess what? I’m a clown, and he gives me the time of day.

“I have a mini-bike with me,” he says, “I am talking to Gregory Peck! It turns out he’s a really a nice guy.

“We’re just BS’ing,” he adds, “So I ask him if he wants to try my bike—Gregory Peck, right? And just then, the doorman comes up and says, Mr Peck, your limo is here—and he says ‘Oh no, that’s ok, Buddy’s got it.’