What’s the opposite of a loneliness epidemic?

In Calgary, it just might be the Creative Aging Calgary Society.

That may not have been the question Gail Hinchliffe asked when she launched the Creative Aging Calgary Society back in 2009, but for hundreds of independent-living Calgary seniors, it’s turning out to be a cheap, fun—and inspiring—answer.

Hinchliffe was interested in exploring the role creativity could play in mitigating some of the negative aspects of the aging process—both in an assisted living environment as well as outside it.

A decade later, the Creative Aging Calgary Society is a full-blown, non-profit, charitable organization that offers guidance to institutions and individuals, teaching them how to tap into their creative lives.

On this particularly warm Tuesday in May, the Chinese Cultural Centre in downtown Calgary is jammed with practitioners from various caregiving organizations around the city for one of CACS’s Creative Aging Symposiums, a day-long program packed with workshops, guest speakers and a cross-section of curious seniors, artists, and people who care for seniors professionally.

“We know that older adults that participate in creative activities—whatever that is—tend to be healthier, require less medication, and experience lower rates of depression—so our goal is to educate the population at large on the positive impacts of creative expression,” says Creative Aging Calgary board member Zabin Jadavji.

That population, in particular—people in their sixties, seventies, eighties, and nineties—who live independently are often the ones most prone to becoming isolated.

“Last year at one of the senior housing forums we gave a presentation about creative aging,” says fellow board member Alice Lam, “and in the audience were many senior Calgarians who came up to us and asked, do you teach art? I live in a condominium with 50 other seniors—but there’s no programming, because it’s just independent living.”

“That’s where the light bulb went off,” Lam adds. “Because there’s not even an on-site coordinator to help them with facilitating events, so that’s where we decided to put our focus with pop art.”

For Lam, that message was driven home when she started to volunteer at a low-cost housing complex in Chinatown, providing support and companionship for seniors, many of them first generation immigrants.

“We would go there, just to talk, help to translate letters, how to get benefits or healthcare issues—and then, eventually, we’re just hanging out, we’re just friends, and I’m like, would you guys like to do painting?

“That’s seen as a kind of class issue,” she says. “A lot of the Chinese seniors who came here, they grew up in tumultuous times, they were victims of war and poverty, and never saw being creative as something they would be able to do—they saw it as a high class thing that rich people did.”

Lam knew some of the horrors and trauma and displacement that some of those seniors had experienced.

One had told her of having to dig graves, as a 12-year-old, to bury bodies left on the streets during the Cultural Revolution in China.

Another man had been onboard a ship filled with linseed oil that caught fire in Hong Kong harbour, leaving him with burns all over his body.

“They never think that their story matters,” Lam says.

What Creative Aging Calgary Society has developed over the years is a six-week long series of exercises designed to get seniors creatively engaged.

“We are doing things like gardening, painting, photography, just even going out for a walk and storytelling—a rainbow of creative activities—just to show them you don’t need a lot of resources or money,” Lam says. “Our goal is, after the six weeks, they’ll enjoy it so much that they’ll start brainstorming and chatting with each other and developing their own little community there.” 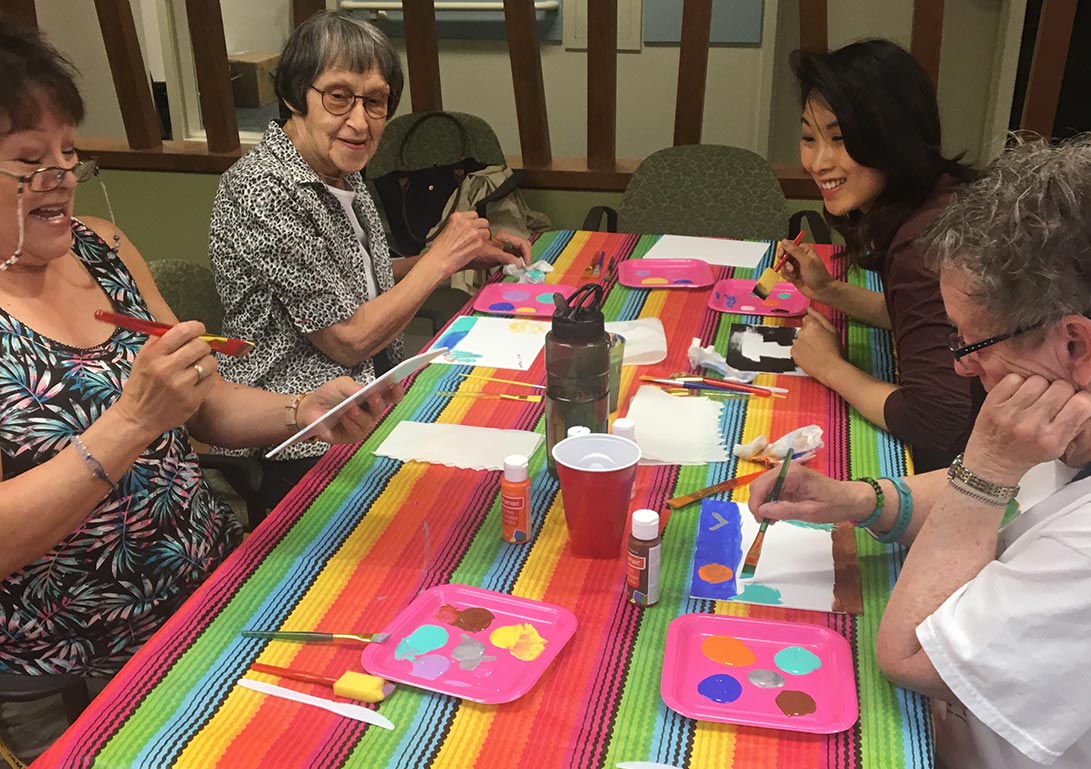 Creative Aging Calgary identifies barriers and looks for ways to lift them.

“That’s kind of how the whole idea started.”

While it started out as a philosophy, the idea of creative aging as a genuine life strategy has been gathering momentum—and believers—since Creative Aging Calgary Society launched a decade ago.

It’s a core part of the programming at United Active Living’s senior residence in West Calgary. Around the same time, Decidedly Jazz Danceworks and the University of Calgary’s Anne Flynn launched Dancing Parkinson’s YYC, a class for people with Parkinson’s Disease, their caregivers, and loved ones to dance. It has been a rousing success.

What’s missing now is a body of data and research to confirm what the board of Creative Aging Calgary Society and a lot of the seniors they’ve worked with over the past decade know in their gut—that there’s often no better prescription than learning how to tap into your imagination.

Lam heard what those Chinatown seniors said—but ignored their protestations.

“I told them, okay, we’re just going to do it anyways,” she says.

Then she got them started with accessing their own creativity.

“We started with a very simple exercise: a mural, where each senior had a little tile,” she says. “It was almost like a paint-by-numbers thing. There was a design already on the tile, but what happened was, when we pieced all the tiles together, it formed a large mural of the Forbidden City [in Beijing].

Before she knew it, they wanted to know what they were going to create next. It was paintings of flowers.

Lam also learned a little bit about pushing through those initial barriers, as well.

“The greatest thing I’ve learned is even if they say no, it’s up to us as facilitators to move the agenda of creativity, to find the way around that—there are ways to get them involved in activity.”

The most emotionally resonant data Lam has accumulated to date? Informal conversations with loved ones.

“I hear from their kids, who are like in their sixties themselves,” she says, “and they tell me—my mom and dad have the painting hanging up in their room!

“They’re proud of what they’ve created,” she adds, “and it doesn’t cost a lot of money either.”