Back in 2009, Dana Kerford played an informal—but significant—role for the tween girls who were students at Rundle College Elementary, where she taught.

“I kind of became the teacher students would come to if they were having friendship troubles,” she says. “We had a strong character education program at our school and I was really involved in that.

“That,” she adds, “was really kind of my passion.”

The secret to living a creative life, as Kerford would soon discover, is to recognize those passions when they land on your metaphorical doorstep, and to wrap your arms around them and give them a hug.

That’s what Kerford realized when one of her Grade 4 students reached out for help.

“[She was] one of my students from the previous year,” she says.

The problem was that this girl’s best friend had clicked with a new girl in their Grade 5 class, creating what Kerford calls a Friendship Fire between the trio that now required dousing.

Kerford gave her a simple, but effective set of communication skills that helped her through that friendship fire, and armed her with some coping skills should any more arise.

“Friendship fact number one,” she says, “which I think is the biggest one, is that no friendship or relationship is perfect. Kids don’t know that naturally, and that is why you’ll see and hear on a playground any time a child encounters conflict, their first reaction is ‘You’re not my friend anymore!’

“And then they run away,” she adds. “They end the relationship—because a relationship shouldn’t have conflict, in their eyes, so they dump the friend. Once they understand conflict is a normal part of a friendship [and that] those kids are going to drive them crazy sometimes… they [discover that friendship] can survive conflict, if it’s dealt with in a healthy way.”

After school, Kerford found herself driving to her brother’s house, when the lightbulb went on inside her head.

“I just decided—that’s it,” she says. “There’s something about this: Teach girls how to stand up for themselves—because I was never the teacher who was like, you need to be friends with everybody. And play with everybody.

“That’s not reality,” she adds. “And I also think it’s not good to say yes to people who don’t treat you with kindness and respect.”

At the end of the day, Kerford would decompress with her entrepreneur husband Michael, and Michael began to spin a few wheels inside his head as well, wondering if there was a business idea lurking inside of his wife’s unique talent.

The response to that first program stunned both her and Michael.

“53 girls signed up for that very first session,” she says, “which was almost all the girls in our Grade 4 to 6 campus.

“[They] spent six weeks with me, after school, jammed into my little classroom,” she says, “all these little eyes peering up at me—and hanging on to my every word.

“I always say,” she adds, “that those six weeks and those 53 girls completely changed my life.”

One thing led to another. Rundle College Elementary lost one of its favourite teachers and GirlPower—and eventually GoodGuys—were launched.

Now, years later, Kerford and her husband have transformed those two programs into URSTRONG, teaching friendship skills to both tweenage boys and girls in a co-educational environment.

Business has taken off in cities across Canada, the U.S., and Australia—where the Kerfords relocated, with their two young kids, in January 2017 although they’ll continue to have a team of presenters in Calgary and across North America. 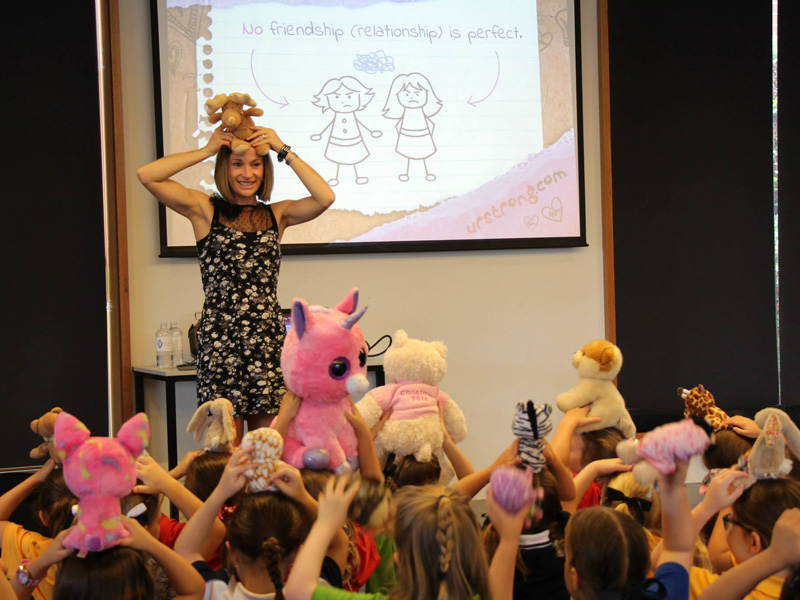 What separates URSTRONG from other anti-bullying programs, says Michael, is that URSTRONG teaches kids a clearly defined set of coping skills—and what’s not to like about that?

“We refer to ours as a social-emotional wellbeing program [rather than anti-bullying],” he says, “with friendship being the primary sort of vehicle we use because that’s really the foundation. If you can manage your friendships and all of the things that grow from those relationships, then you’ll be more successful in other areas. Positive self-esteem confidence, performance and stronger academics are byproducts of feeling good about your friends and feeling good about how you interact with people.”

The gap between our institutional good intentions and the actual execution that URSTRONG fills lies in a central old-school assumption about how kids make, and break friendships, says Dana.

“I think that the myth was—and a lot of people still believe it,” she says, “was that children will learn that naturally. Kids will figure it out on the playground.”

The reality is that some kids will—but more kids won’t.

And for a company that’s gone international, it turns out that friendship facts are pretty universal, whether you’re teaching them in Perth, Winnipeg, Seattle, Calgary—or Beverly Hills.

“We actually did [the program] with the corrections services of Calgary and then a prestigious private school in Los Angeles within the span of three weeks,” Dana says, “and it was the same message received, with the same feedback of what kids were dealing with. They want to be liked. They want to be happy. They want to know what to do when they’re out of their comfort zone—that’s it!”

Similarly, it turned out that once she’d launched GirlPower, Kerford would encounter boys who wanted to know where their skills classes were—and after a little prodding from Michael, Dana discovered two important things about tween boys: One, they aren’t very different from tween girls, and two, they would respond to a woman teaching them.

Probably because a lot of boys have gotten some pretty crappy advice about how to douse friendship fires over the years, adds Dana.

“The thing is with boys,” she says, “as young as six years old, they have been told to suck it up and be a man.”

“For these boys, that immediately triggers that fight or flight response,” she adds, “and that provokes a huge amount of anxiety—because a little boy does not want to do that. He knows it’ll get him in trouble, and he gets scared.”

As the organization has evolved, the Kerfords realized that the experiences of tween girls and boys in friendships were far more the same than different and they began to develop co-educational programming under URSTRONG.

All it took, Michael says, was a trip to the White House.

“We got to go to the White House for a gender diversity summit,” he says “and we came out talking a lot about the fact we’re running GirlPower and GoodGuys separately—are we contributing to this idea that they’re really quite different? We still recognized the importance of same-sex programming but knew that we needed to provide options for students, parents, and teachers where they can learn without some of the gender biases that exist.

“That’s when that fundamental question was asked: if we were starting the company today, would there be that gender element to it? And the answer was no.”

The continued growth of the company led to a second aha moment for the Kerfords—namely the decision by Michael to step down from running ECO Canada in order to run URSTRONG —from Australia.

“What we found in Australia is that they’re super receptive to our program,” Michael says. “We have a really solid partnership with a school in Perth, Perth College—and it just took off. About 50% of the schools there are independent schools. There’s a big push towards Positive Education, which is totally aligned with what we’re doing.”

The only bummer part of this made-in-Calgary success story is that two people living highly creative lives have temporarily relocated to the other side of the planet.

“It’s been so fun to be able to create something,” Dana says. “We’ve created this together with his [business] skills and my [teaching] skills. Working together, we have shared in all the ups and downs and celebrated all those little wins along the way.”

“The cliche is always, find something you love and you’ll never work another day in your life,” adds Michael. “But fundamentally it’s true. You’ve got to have something you believe in when you wake up to maintain the level of emotion that a small business takes—you’re doing a lot of heavy lifting to get it to the point where you can raise small kids and support a family on it.

“So you better believe in it.”