Elaine Lee wasn’t supposed to live past the age of two. Born with Osteogenesis Imperfecta (aka Brittle Bones), Lee weighs 27 pounds and is confined to an electric wheelchair, although ‘confined’ might not be the right word to describe someone as dynamic and effervescent as Lee.

A painter, poet, writer, and performer—and aspiring filmmaker—Lee started living a creative life shortly after she blew past that two year life expectancy, and has not paused to look back yet.

Lee’s primary background and experience is as a visual artist, having studied at Simon Fraser University and Emily Carr University, earning a Liberal Arts Certificate and a Bachelor of Fine Arts Degree before moving to Calgary in 2010.

This lifelong award-winning visual artist, who started painting at the age of three, also has experience in performance and filmmaking.

While studying on the west coast, she acted in three short films: Psycle, My Little Habitat, and Avery’s Gnome, all written, directed and produced by her dear friend—Calgarian filmmaker John Dritmier. Sadly, Dritmier was killed in a plane crash, after filming Dangerous Flights for Discovery Channel.

Once Lee permanently relocated to Calgary, she was a Special Skills Actor in The Klondike (episode 1) and Damnation (episode 5).

“I love performing actually,” she says. “Because it allows you to go into a different world, into different characters.

“At the same time, it’s not exactly a different character,” she adds. “It’s just another side of you, expressed in a more physical and vocal way rather than using your imagination and creativity to create a physical piece like with visual art.”

They all require creativity and focus and commitment. What distinguishes acting from visual art is the relationship you have with the audience.

Lee has never seen herself as having a “disability” and has issues with such labelizations.

“Performing is actually more powerful in the sense that if people really want to know who I am as a human being, not just as an artist or performer, that they’re able to see me perform, because they can see that—yeah—she’s just as capable and physical as anybody else,” she says.

“You can connect to your audience in a manner they might not be expecting, and I think that opens their eyes to dialogue or thoughts—and maybe a new attitude towards life in general.”

Namely, that whatever limitation you may feel the world has burdened you with might also be an opportunity to view or experience things in a completely unique way—sort of the same way Lee turns her days on their head by living creatively.

She hopes her story will inspire others to make the best of their own lives.

Her vision for our city is to thrive and be more open-minded to everyone in an inclusive, empathetic manner that respects all cultures, diversities and abilities without judgement, labels or categorizations.

“Art is the air I breathe,” she says. “Creativity is a part of who I am—not just through my artistic practices, but in the way I live my life every day with my personal physical challenges that I deal with.

“It’s always being aware of how you move,” she adds, “how you interact with people, how do you present yourself to the world? Because I think you always have to think about that.” 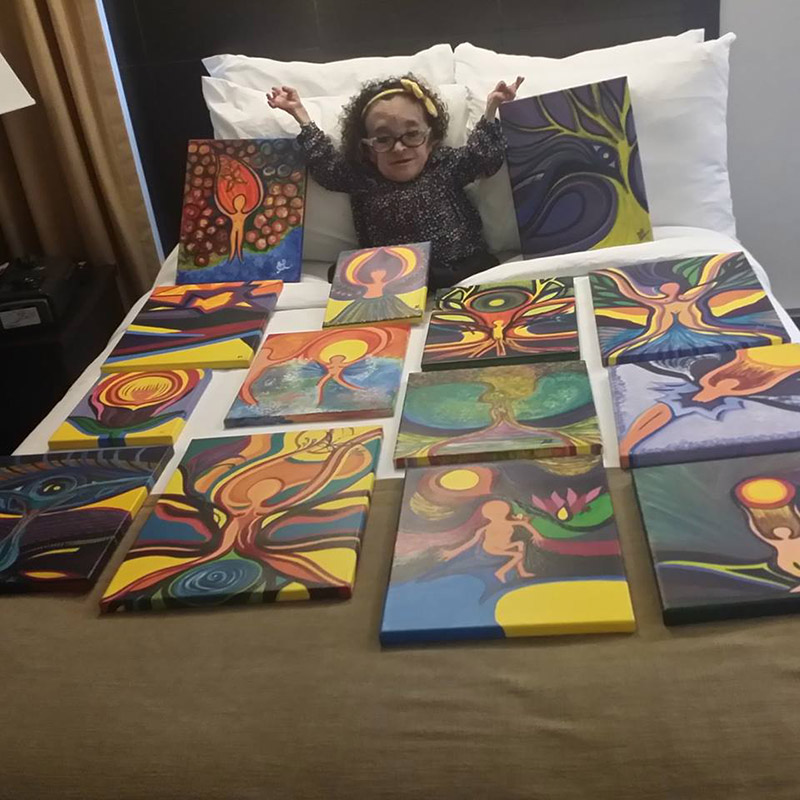 Elaine Lee and her paintings | Photo: Courtesy of Elaine Lee

Lee is also a motivational speaker. In May, she was hosted by the Whitehorse Chamber of Commerce as a guest speaker for their Business Connects Conference, where she shared the story of her many achievements since moving away from the Yukon in 2000. She spoke alongside another inspiring Canadian, ‘Man in Motion’ Rick Hansen, who then worked Lee into his speech almost 10 times.

She is also an avid volunteer and loves to give back to the community. Her extensive volunteer service led her to receive award scholarships in her earlier days upon entering university and she can still be seen volunteering for organizations such as the Salvation Army and the Calgary Stampede.

This past spring her creative life received another jolt of inspiration when she attended the Frida Kahlo photo exhibition at the Glenbow.

It turns out that Kahlo’s creative life has quite a bit in common with her own. Kahlo was in a horrifying bus crash, that left her bed-ridden in a hospital room for a long stretch of time. Lee experienced a trauma on a bus too, back in 2004, in Vancouver, when the driver was forced to slam on the brakes to avoid an oncoming vehicle, resulting in Lee having a broken femur among other things and being housebound for a whole year, too.

Both women dealt with the trauma through painting and drawing—accessing their inner lives in order to exorcise the physical limitations placed upon them.

“The reason why I really appreciate and connect with her work is more about her life story and why she does art,” Lee says.

So, Lee’s art not only serves as her hobby and passion but also as a form of therapy. And it can be used by anyone suffering trauma.

“I just recently told an elderly man who lost his wife to cancer to try art as his therapy. If you like to write poetry, just do it! Never compare yourself to others. As long as you find comfort and solace in writing poetry or doing art, then just go for it,” she adds.

“I sometimes teach as an artist-in-residence at an elementary school and I teach the children the same thing. I enjoy motivational speaking because it lets me share the message of hope with others.”

Her goal and purpose in life is simply to continue being true to who she is, to inspire others, and to live life to the fullest, always having to think outside the box in order to make any life experience work.

With that kind of resilience, hope, and creativity, it’s not a mystery why Elaine Lee blew through that original doctor’s diagnosis that said she had two years to live. She lives creatively every day.

“Without art,” she says, “I don’t think I would have survived.

“And if you don’t live a creative life,” Elaine Lee says, “you will go crazy.”