In 2015, Kaely Cormack and Hayley Muir, members of The Shiverettes, a Calgary feminist punk band, took a look around Calgary’s punk music scene.

The view lacked something.

“We didn’t see ourselves represented in the scene.”

One of the guiding ethos of the punk movement has always been a DIY—Do It Yourself—mentality.

Which, ironically enough, matches up quite seamlessly with one of Calgary’s core values: an entrepreneurial, action-oriented belief that if something’s wrong with your view, improve it.

So in 2015, the duo launched Femme Wave, a new kind of Calgary festival—then reached out to everyone—other women, non-binary artists, the LGBTQ2 community—anyone who felt as if they’d had a gate slammed in their face instead of a door opening.

It didn’t take long for them to realize they were on to something.

“We want to connect all those people that are facing the same obstacles we’re facing, and work together,” Cormack says, “rather than each of us individually trying to climb up in this very male-dominated scene.

“In other words, why not work together? And then we can create a bigger wave, for lack of a better term, to make some change.”

The plan was to create more musical opportunities for women, and non-binary and queer artists, but somehow, the plan shifted, to include visual art, standup comedy, and film—because there were just as many gates around those cultural scenes as there were in the punk music scene.

“We try to frame it as a multi-disciplinary arts festival,” says Muir.

“Everybody has similar and different gates to break through,” she adds. “That’s what’s so important about having a wide variety of individuals at the board level, the committee level—even just at the level of sound boards, asking for advice and that kind of thing.

“The more people we have involved that have different life experiences and come from different areas, the more perspectives you have on life and on people.”

It turned out there was a market for Femme Wave, both from the number of artists interested in participating in a micro-budget festival, volunteers willing to form programming committees and help curate, and audiences interested in attending.

“Going into that first one, we just planned for it to be one night,” Muir says.

Four years later, they have just finished strategic planning sessions, laying out the future of the festival. They have a board of directors. They have a three-year-plan to find a way to have full-time, paid staff running the festival, rather than volunteers.

“When it [the first one] was over, it just sort of snowballed,” Muir adds, “and people said, so you guys are doing this again next year right? Because that was so cool and so fun and so great and so different.”

What makes Femme Wave unique is that rather than being a reflection of their own, individual tastes, Femme Wave is every bit as collaborative, and collectively curated as the communities it showcases.

“Our arts curator is Dana Buzzee,” Cormack says, “and she curates through a very feminist, queer lens—so she’s done a wonderful job of bringing in her community, showcasing a lot of artists that are queer, that are non-binary, that are trans—and putting the spotlight on them.”

What Muir hopes Femme Wave has become over the years is a way for young women and non-binary artists to find the role models and mentors she struggled to connect with as a young teenage girl attending all-ages shows back in the days before Femme Wave existed. 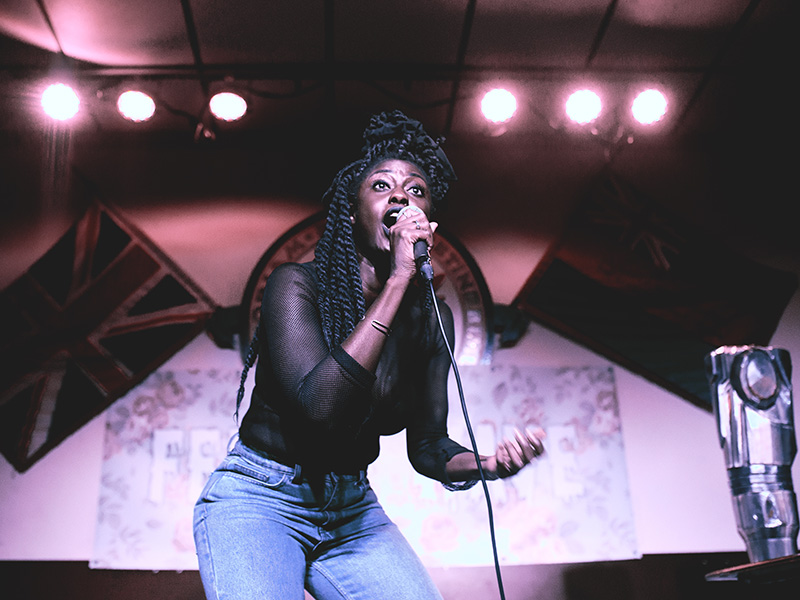 “I never saw any women onstage,” Muir says. “I saw women in the crowd, for sure, I tried to make friends with them but I had a hard time busting into the community at that time.

“At that age, if I had seen women in bands, it might have happened for me sooner–so if the work we do can provide somebody like me at 15 a spark to maybe do that, then that’s great.”

Cormack, who grew up in small-town Ontario before attending university in St. Catherines and then relocating to Calgary about a decade ago, says the all-ages component of Femme Wave matters. They’ve done a number of all ages shows at various venues, one of last year’s being at McHugh House.

“Every year, I go to Girls Rock Camp, and the last two years I’ve gone, I’ve taught them about Femme Wave,” she says. “I teach them about how to start their own rock festival. I teach them like—you can just do this. Here’s how. Go and do it. Like I did. You’ll figure it out—and hopefully I can give them some tools and get them a little further ahead than I was at the same age.”

“I learned so much from women who did this 10 years before I did,” she says. “They imparted so much wisdom and helped us grow and got Femme Wave to where it is now. The duty now is to do that for the kids who are 10 years younger than we are, so that one day they can take over and run with it—and they’re so much smarter than I am.

“These kids coming up now, it’s so impressive how in tune they are, how smart they are and how progressive their ideas are–once they’re in a place where they take the torch over, and take this thing over, changes will happen even faster,” she adds. “It’s really important for us to connect, and mentor, younger people so they have that support system that been so helpful for us.”

And if there was ever a question of whether it’s worth all the effort—rather than say, relocating with the band to Vancouver, or Toronto—neither seems in much of a hurry to break down gates in a different area code.

“I love it here,” says Muir, who mostly grew up in Calgary. “I’ve seen it grow and shift, especially in the last few years—and there’s always such a strong sense of community, and I think there’s good and bad to that.

Cormack adds that there’s something to be said for a city the size of Calgary.

“It’s kind of in the middle,” she says. “It’s not a huge city. I just volunteered at a couple places and the next thing you know you’re in.