Frances Vettergreen juggles several identities at a time. Some days, she’s a Calgary physician. Other days—quite often in the same week—she’s a painter, a poet, an urban edible gardener, a sourdough bread baker—as well as being a mom to a young son every single day.

It’s one thing to live one creative life.

Maybe the key to seeing how it all fits together is that Vettergreen doesn’t see her creative life as starting in one place (say, painting), and stopping at another (say, doctoring).

If you’re wondering how medical school turned out a poet, a painter and a sour bread baker on the side, it turns out that Vettergreen’s journey to becoming a physician started at a most unlikely place: Art school—at the Alberta College of Art (ACA) in the early 1980s, before it became ACAD.

“Art school [first at ACA, then the University of Alberta] was the first thing I did,” she says, “and I would say yes, that informs everything I do.”

Vettergreen majored in studio drawing at ACA for two years before finishing her BFA (with distinction) in painting at the University of Alberta. She aspired to become a painter, while (hopefully) earning a living on the side as a curator perhaps, or doing some other job in the art world. 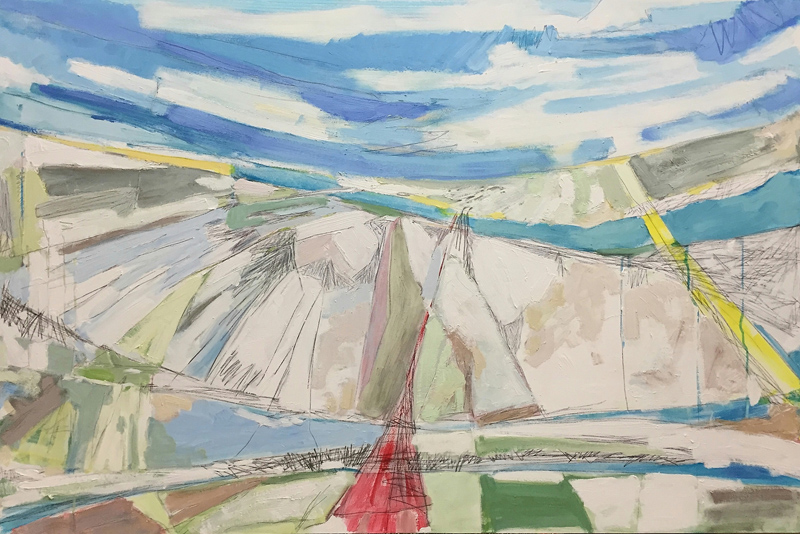 Curve of the Earth; oil, wax, acrylic and conte on panel | Image: Courtesy of Frances Vettergreen

Instead, it turned out her studio drawing degree led to a series of subsistence jobs, such as working as a receptionist or waitress.

That led Vettergreen, after a few years of toil and trouble, to re-enrol at the University of Alberta, this time as a pre-med, mature student.

It took a few humbling experiences, such as flopping the first time she had to try calculus and being bullied by the professor who ridiculed her art degree, but eventually, Vettergreen got back in touch with her math mojo. After finishing up her pre-med, she earned a full scholarship to complete her MD at the University of Calgary.

She says there’s also no question that the doctor in her makes use, every day, of her art school training.

“The process of learning to observe [is invaluable],” Vettergreen says, “ There’s an old saying in art school that [goes something like], ‘draw what you see and not what you know.’ That’s a skill I use in medicine all the time. Because if I’m working with a patient and they’re telling me something, if I jump to a conclusion, I’m going to miss things.

“It’s that business of observing,” she adds, “just being really aware of what you’re seeing and having the trust to deal with what’s actually in front of you. Not what you think is in front of you—[that] informs all of it.”

Art school might have been an unlikely place to launch her medical career from a 21st century perspective, but Vettergreen is quick to point out that there’s a long tradition of physician artists, including Somerset Maugham (who never practiced), Anton Chekhov, and William Carlos Williams (and these days, Canadian novelist and physician Kevin Patterson, as well).

“Medicine is now considered a science,” she says, “but historically it was as much a humanity—and the notion of physician as scholar—as philosopher—is an old one.”

“Humanities training gave me an advantage over the other [medical] students [who had none],” she says.

“There was somebody in my med school class,” she adds, “who was a musician. Somebody else who’d been a lit major in comparative lit—and I think what we shared, that not all, but some of the other students, had yet to come around to [is that] medical training, because it’s incredibly rigorous, is a narrowing experience.

“You’re working all the time,” she adds, “and you’re sleep-deprived and it’s an onerous thing to do—so there isn’t a lot of outside influence on medical students, because there can’t be. There’s no time.”

Flash forward to 2016, where Vettergreen works as part of a uniquely collaborative medical practice of four physicians that might even be described as slow medicine.

All four are part-time doctors who live full-time creative lives—and cover for each other if their patients have crises on the others’ days off.

“One of them has two kids,” Vettergreen says, “so her other gig is being a mother, basically. One delivers babies. Another is the birth control specialist in Calgary—she works for family planning clinics. And then I’m the artist. But none of us wants to work nose-to-the-grindstone, so it’s lovely that we’re all on the work-life balance—if we’re all on the same page, we can make it work.” 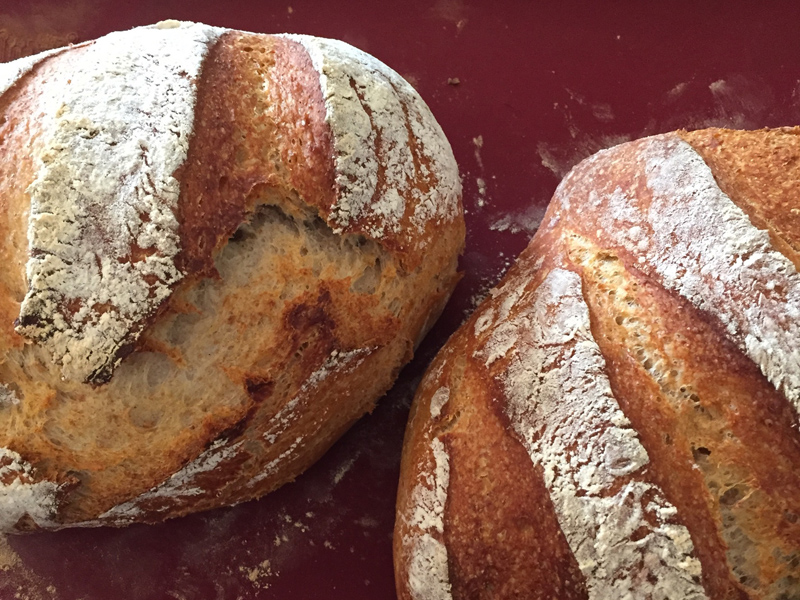 The first sourdough loaves of the season, fresh from the oven | Photo: Frances Vettergreen

And while she tries to spend at least a couple days a week in her painting studio, that tends to be a bit of a seasonal pursuit mainly because, during the spring and fall, of the demands on her time produced by her garden.

“I’ve got mint, sage and two cherry trees,” she says. “I think there’s still a kiwi vine struggling along out there—so all sorts of things that we don’t necessarily eat, but are edible. It’s part of the connection to the human hand upon the earth maybe? If I could be a little poetic. I feel like I’m in a city, but yet I have a personal need to be in nature and so my garden is a way of bringing nature into the city—and there’s many many layers.

“Number one,” she adds, “there’s nothing better than walking to the backyard and grabbing something fresh—and number two, I’m growing even more food than I ever have since my small boy was born, because it just sort of felt important that he see it. Even if he doesn’t participate [in growing stuff], which he mostly doesn’t. I grew up with a mom who gardened, and she grew up with a mom who gardened, and so—all of the generations [of my family] garden, my sister and brother garden.

“That feels like a real connection to the generations and beyond,” she says, “that a connection to what people have always had to do to survive. And so historically that feels important.”

Even though her creative life may look like it took a detour into running a family medical practice, it never really did. And Vettergreen doesn’t pause when asked why it matters to live one.

“Without creativity, we’re lost,” she says. “I think that’s kind of what defines us as human—at least the best of humanity—is that we’ve got opposable thumbs. We’ve got big brains. We can innovate.”