From the minute you walk into West Village Theatre, the excitement is palpable. Exhilarated young voices echo from the theatre and as you pass through the curtain, a scene of circus wonder unfolds.

There are two young men juggling on one side while another goes whipping by on a unicycle. A young woman balances on a slack line, concentration showing on her face. A girl in a bright yellow costume, sits high above, getting her stilts adjusted as three others pass by balancing on walking barrels. Chaos, yes, but it’s organized chaos and each of the 48 young participants is laughing and bouncing about. After all, it’s just a typical day at Social Circus Camp.

Hosted by Calgary’s own Green Fools Theatre, the children come from diverse backgrounds and range in age with the youngest being seven. They come to the free program via Kids Up Front, Calgary Catholic Immigration Society, Willow Park School, and the Aboriginal Friendship Centre, and many face challenges or are new to Canada. In fact, one arrived in Calgary from Ethiopia just days before the camp started. Another spent time living in a refugee camp.

They don’t all speak the same language but that doesn’t stop them from helping one another out as they practice and it’s obvious to anyone watching that they’re friends.

The Green Fools have been running Social Circus for a long time, 17 years, but 2017’s camp is a bit different. To mark Canada 150 and with support from Cirque du Soleil, the program has grown from a standard one week rehearsal period to three weeks, and instead of a modest performance in their rehearsal space, these 48 children are working towards a grand spectacle taking place on August 29 at the Southern Alberta Jubilee Auditorium.

“What’s very exciting about this project is in celebration of Canada 150 we are putting together a big presentation called COU, A Circus of Unity, which is a melding of our theatre work and our circus work,” says Dean Bareham, Artistic Director and Co-founder of Green Fools Theatre. “We are going to do a great show with 48 amazing kids… [and] 13 amazing instructors, professionals in their fields and longtime fools, who are going to be working with [them].” 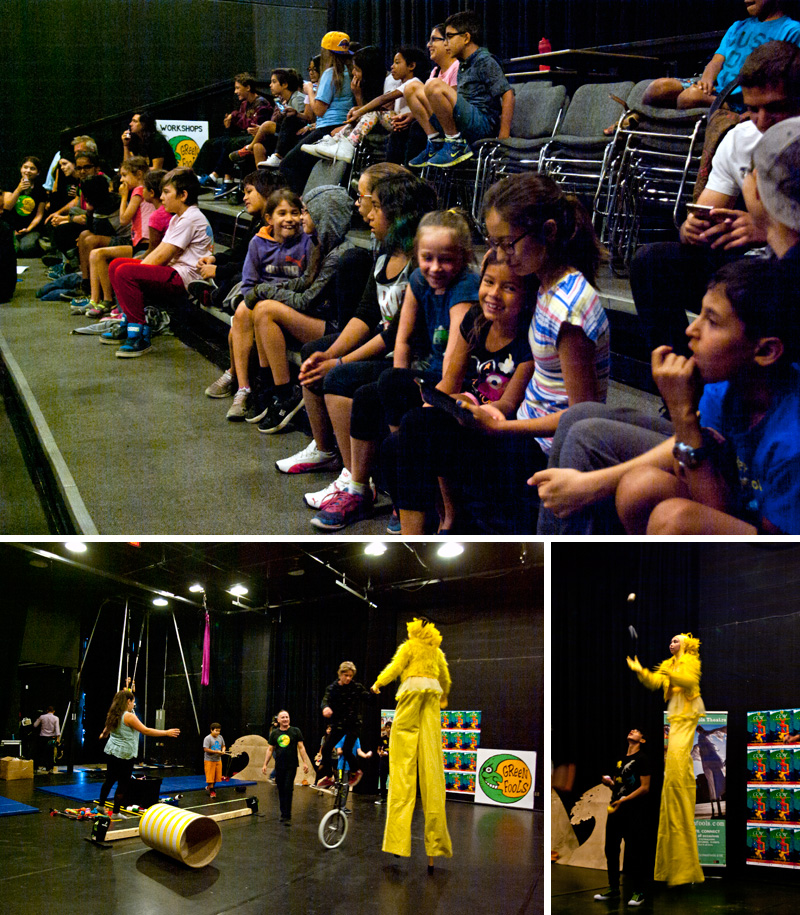 Featuring 48 children between the ages of seven and 17, participants of Green Fools’ Social Circus Camp work towards the debut of COU, A Circus of Unity | Photos: Amy Jo Espetveidt

COU features an original story about three clans who are forced to come together after a flood. Bringing together circus style with contemporary elements to tell a fantastic tale, strength, courage, and friendship save the day in this theatrical adventure.

“We’re very, very excited about this show,” continues Bareham. “The show is about the unity of Canada, it’s representing Canada’s diversity, and we’re celebrating that with a diverse group of kids. We have over 10 countries represented—these kids are working their hearts out and they’re going to do an amazing job.

“You cannot go see a more affordable show at the Jubilee Auditorium, tickets are $10 and $15, so please come and check it out. Support these amazing kids, they need your support, and we’re going to show a vision of Canada—and the diversity and the uniqueness of Canada—and celebrate that.”