Jill Drader has always been a builder. Only now, instead of setting tiles, she helps reset people’s lives.

Public speaker, business strategist and leadership mentor, Drader—whose life history also includes stints as a Calgary tile setter and English teacher—is just back from a weekend retreat in Field, BC, where she facilitated her Recovery Transformation Workshop for 16 women.

It’s an event that incorporates a strategy for participants to acquire the life skills with which to transform their lives that they aren’t receiving in traditional recovery programs.

“This is [also] a response,” says Drader, “to what I found missing from my other projects. We take you through a transformational curriculum to change your [life and career] perspective, and help you identify what’s not working, in order to help you become who you ultimately want to be and give you the tools to carry that out when you leave. It’s [basically about] goal-setting, values assessment and time management.”

Drader, who once traded in a white collar life teaching English at Bow Valley College for a dusty blue one as a tile setter, is—like any reliable trades person—as concerned with the tools she packs into her curriculum as she is with the outcome.

That’s partly because, before she transformed from white to blue collar, Drader underwent a profound transformation in her own life.

A little over a decade ago, freshly graduated from the University of Calgary, Drader was drunk as a skunk.

“I was an alcoholic and addicted to cocaine,” Drader says. “I got my degree and I didn’t go to convocation, because I was in a treatment program.”

She had a socially-conscious, but fairly unemployable arts degree (in African Studies, French and Spanish), to go with her bad habits, all of which led her to the other side of the planet.

“I did what lots arts grads do,” she says. “I moved to South Korea to teach English where on the peninsula, there’s this collection of total lost [expatriate] souls.

“So there I was [in South Korea],” she adds, “thinking—in my sick, sick way —that I actually just needed to move somewhere where they didn’t sell cocaine.”

Instead of straightening out, Drader discovered a boozy, late-night bunch of drinking buddies, which led to the worst 48 hours of her life—someone slipped the date rape drug into her drink at a bar, leading to Drader being stuffed into a car in a back alley, where she was held against her will (by an AWOL American soldier), and violently raped.

Drader escaped when a taxi driver she describes as an “earth angel” put her in touch with a group of American soldiers, who introduced her to social workers, who got her to a 12-step program, setting Drader on a path that reached 10 years, alcohol-free, in April 2016.

It coincides with her sharing the story of the worst night of her life, publicly, for the first time.

“It took 10 years,” she says, “of me having to figure out how to remove emotion from what happened and not be stuck in it—and tell the story in a way that’s transformational and can serve [others], because that was what always held me back from telling the story before.

“I didn’t know how to tell it without having the PTSD come back up—or having fear around it, because that translates to really bad nightmares. Through this journey,” she says, “I had to learn to live again, and love again—and not fear, and not be angry.”

Drader tells the story at maythefourth.ca, an ongoing fundraiser where a $10 donation for the Wood Buffalo/Fort McMurray food banks gets you two hours of motivational speeches to inspire and refresh.

Back in Calgary a year after the horrifying incident, Drader made another discovery.

“I was teaching at Bow Valley College,” she says, “and was disconnected from the work. “I’d look out the window at Olympic Plaza… and there were guys out there on scaffolds, working on the stonework in Olympic Plaza. So I went outside and asked the guys what they were doing. They said they were bricklayers.”

There was something about bricks that appealed to her. Thanks to growing up with a dad who worked for Air Canada, Drader had been to places like the pyramids, Chichen Itza and the Taj Mahal—some of the great human constructs on the planet.

“I signed up for the tile setters apprenticeship program, and spent the next four years doing my apprenticeship, as a journeyman tile setter and stoneworker. And,” she continues, “I rebuilt my life, block by block.” 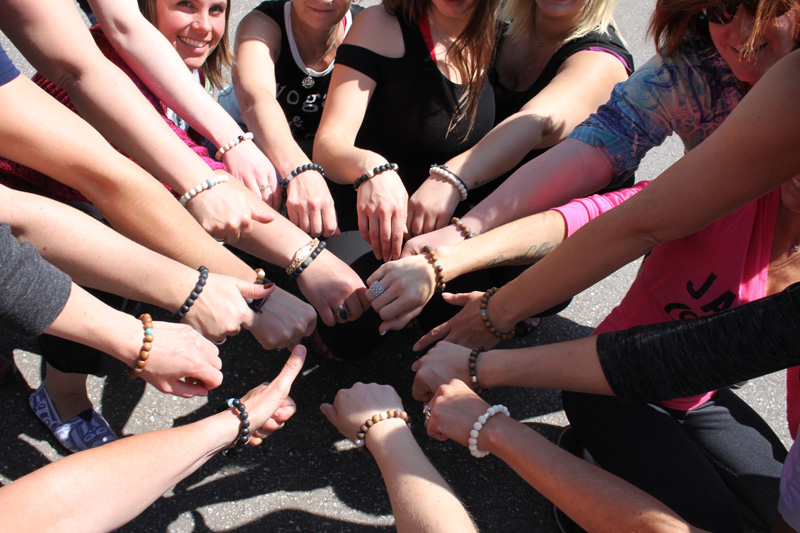 Recovery Transformation Retreat is a united sisterhood of understanding that we are all recovering from something and we are here for each other | Photo: Jill Drader

It would be great if that were the redemption story, but there were still many twists in the road. For one thing, the construction industry still doesn’t recognize women as equals—it’s a brotherhood first and sisterhood second.

When Drader discovered she was pregnant with her first son—she has two, aged four and six—she was laid off, then told to apply to go on disability—at a 50% pay cut.

“I decided to build a project [Women in Work Boots] out of love,” she says, “to network women who loved their work—and that’s now grown on Facebook to more than 3,500 followers. It’s an engaged community, where I’ve gone and spoken with groups in Vancouver, Edmonton, Bonnyville, Saskatchewan, Ontario.”

That involved mentoring women living at the YWCA through Women in Work Boots for five years leading to Drader being named one of Avenue Magazine’s Top 40 Under 40 in 2014.

In mid-May, Drader was named a Faculty of Arts Celebrated Alumni Award by the University of Calgary.

Whether as an advocate for women in the trades, or as a mentor, or public speaker or leadership coach, Drader continues to find innovative, inspired and creative responses to the challenges life throws her— and hopes to share them with others.

“That [skilled trades experience] really shifted the way I did things,” she says. “And when I started to get on that page of love not fear, everything changed for me. Women in Work Boots happened for me. I had another son. I incorporated my company Steel Toe Stiletto, which was based on that time at Bow Valley College and finding that apprenticeship—because I still had to teach night classes [for financial reasons].”

Now, after a ten-year wild ride that’s taken her around the planet, through some very high highs and desperate lows, there’s one tool Drader offers as a facilitator to help kick-start a participant’s own personal reset.