The theatre inside TELUS Spark is packed to overflowing. Dozens of delegates stand on the stairs, unable to find a seat but unwilling to miss the keynote address from Next Gen Dragon’s Den investor Nicole Verkindt. She is talking to a room full of medical innovators, academics and physicians about the persistence of innovators, such as Orville and Wilbur Wright, who invented flight.

Innovation, she says, involves a whole lot more perspiration than it does inspiration.

“My takeaway,” she says, judging from the journals of the Wright Brothers, which are the inspiration for a new book about them, “is there’s no eureka moment.”

Verkindt’s speech is the kickoff event of the 2016 Global Healthcare Innovation Academy, a unique gathering of medical and business innovators from as far away as Hong Kong and Switzerland, and as close as the University of Calgary.

They’ve gathered for a two-day summit to pitch medical innovations with both commercial and social potential. It’s a Dragon’s Den sort of environment, featuring any number of startups hoping to become what one of the academy’s most prominent speakers—Swiss academic and physician Dr. Didier Pittet, the man behind the worldwide introduction of alcohol-based disinfectant into hospitals—did over the past two decades.

It’s all part of Calgary’s burgeoning—and world-class—medical innovation community, much of which is centred on W21C, or Ward of the 21st Century, at the University of Calgary.

W21C is a research and innovation initiative based in the University of Calgary’s O’Brien Institute for Public Health and the Calgary Zone of Alberta Health Services (AHS). The collaborative spaces, Living Laboratory, and interdisciplinary team enables both researchers and industry experts to bring new ideas, prototypes, or health care products for testing in both pre-clinical and clinical environments—to enhance patient safety and quality of care

The only one of its kind in Canada, this innovative program was co-founded by Dr. John Conly, a University of Calgary physician and professor, who specializes in internal medicine and infectious disease. 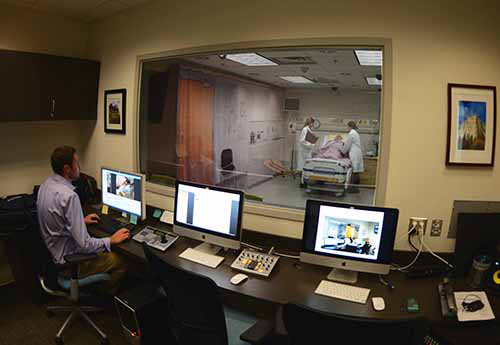 Conly looks like a TV doctor from the 1970s—a kindly grandfather who always knows what’s best.

However, rather than being one of those doctors who has his story and sticks to it, Conly comes to work every day willing to have his conventional wisdom turned completely on its head.

How did that happen?

“I’m hardwired that way,” Conly says, one Friday afternoon in early August in a boardroom at W21C on the University of Calgary campus.

“I don’t know what the reason is,” he adds. “I just have a love of the innovative spirit—to be able to see, is there a better mousetrap that we can build? Is there a better way of doing things?”

Conly’s adaptability might mark him as a medical maverick, but there’s something prototypically Albertan about his sensibility. It’s just that rather than taking that sensibility to the oil patch, Conly took his to the hospital ward—and as a result, is one of the people helping reinvent it—and quite possibly Alberta’s idea of itself, for the 21st century.

Innovation mythology is not only full of aha moments, but also grand plans and profound insights.

For Conly and the team behind W21C and the Living Laboratory it all started in 2002, when he was presented with an extraordinary opportunity.

That’s where, outside an elevator in the north tower of the Foothills Medical Centre, Conly ran into Andrea Robertson, then the Director of Medical Inpatient Nursing for the Calgary Health Region (now Alberta Health Services).

“She said, we’ve got to do something,” Conly says. “We’ve been told we’ve got to renovate one of the medical teaching wards in the special services building [adjacent to the Tom Baker Cancer Centre] of the Foothills Hospital.”

There was funding available to upgrade the hospital ward into something more contemporary than what it had been.

That’s when Conly asked one of those what-if questions.

“I said, why don’t we look at doing something very, very different?” he asked. “Why don’t we create the most modern ward, with the latest technology—we could call it high tech, high touch, because that’s an important component for healthcare—build a very modern and highly technological ward, where we would bring in a lot of people from different disciplines to be able to work to enhance patient care and safety?”

Conly shepherded the creation of this interdisciplinary medical ward that featured significant design advice from the group of people who spend more time with patients than anyone: nurses.

“The nursing staff,” Conly says, “are at the bedside of the patient much more than the physicians and they actually have a much better feel [for the patient experience].

“The physicians are busy with diagnostics and tests and working out a therapeutic plan, but for the care delivery and interactions with the families, the nurses are there at the bedside much more often [than physicians].”

That meant implementing a series of low-cost, lo-fi changes, such as the colour schemes on the walls, the physical dimensions of various spaces and monitoring techniques of patients—alongside any number of sophisticated technological upgrades.

In addition to this, Conly and the W21C team incorporated an unusually rich variety of perspectives that one might not ordinarily associate with medicine.

“We brought people together,” he adds, “that you would have thought intuitively have no business being together—all with a different view of how we could do this.

“We were challenging the hospital experience,” Conly says, “to look at how we could redirect the highest quality of care, but also explore the use of new technologies that could be used to help facilitate that care delivery.”

Conly likes to reference a book, by Steven Johnson, called Where Good Ideas Come From as a kind of intellectual template for what he’s trying to achieve with W21C.

“There’s even a connection,” he says, “between [the creation of] the printing press and wine making! They created one set of tools from another. Totally disparate ideas, but the idea from the wine press was what helped Gutenberg design his first printing press. That was where it came from.

“Sometimes we’ve lost sight of that,” he continues, “and that’s something we’ve tried to bring back as the face of this new, living laboratory. It is truly interdisciplinary, which is really key to its success.”

And what makes W21C stand out just a little bit is that it is perfectly willing—and eager—to embrace small-scale, lo-fi innovations that connect on a human level.

“It uses technology—but also [asks the question] how do humans, given all the vagaries of human behaviour, interact with those technologies? How can we make that interaction better? Because,” he adds, “now you’ve got not only a patient-healthcare worker interface but a patient-technology-worker interface.

“How do we close that triangle, making it even more fluid and more dynamic?”

Now in 2016, Conly says Calgary—and Canada—holds its own in a world where creativity and medicine cross paths with anyone in the world.

Why create a hub that encourages and embraces creativity?

“If you can turn on the talents and ideas of individuals who work in the healthcare system,” Conly says, “and foster a culture of innovation to allow them to work in a sandbox environment, much like W21C, and you replicate what we’re doing in multiple centres across Alberta, across Canada, you’ve got the opportunity to be able to create and evolve multiple types of innovations. Because then, the sky truly is the limit.

“We just have to unleash the power of the inner innovative spirit,” he adds, “within those healthcare workers. There are many people who have [innovative] ideas—let’s just set up an environment where they can explore those ideas and test their thoughts.”