When 26-year-old Karl Hirzer took to the Jack Singer Concert Hall stage this September, A Taste of the Calgary Philharmonic gave audiences their first look at the orchestra’s new resident conductor.

Hirzer started working with the Calgary Philharmonic as part of the Canada Council for the Arts’ Residencies for Composers and Conductors grant program shortly after completing his graduate studies at the McGill University Schulich School of Music.

“It’s been great. It was a bit of a learning curve when I first got here because I was so busy in the first month of my time here but it was a great experience to be thrust into that position. And since then I feel that everyone has been really supportive,” says Hirzer. “It’s been a great opportunity for me to dive in and develop all aspects of the job.”

Incredibly talented and energetic, he has quickly become a fixture in the community.

“As the resident conductor, I’m the one who is here all the time. So there’s a lot of guest conductors who work with the Calgary Phil, but I am the one who is here for the full year,” says Hirzer. “My responsibilities are primarily in the pops concerts, the family concerts, the kids concerts. I do the outreach concerts as well. So a lot of stuff coming up for the Christmas season in the next few weeks.

“I also have to act as the assistant conductor for the more canonical repertoire—the classic series—when the big shots come in to lead the orchestra. So I have to learn that repertoire as well and sort of be on standby and jump in at any moment,” he continues. “In addition to that it’s a great opportunity to learn from these renowned conductors that come in to lead the orchestra and help them in anyway I can.”

Hirzer has see first hand how the Calgary Phil is a cornerstone within the arts community, providing opportunities for Calgarians to live more creative lives.

“In general if you have a great orchestra in your city, I think it injects a great amount of opportunity and enthusiasm into the arts world,” he says. “For example, the orchestra plays for opera, plays for the ballet. We’re doing all these things around town already outside of our classics series. There’s an opportunity for great collaboration within the arts community which I’ve already seen a lot of. I’ve realized that’s one of the really great communal aspects of the arts scene here in this city.” 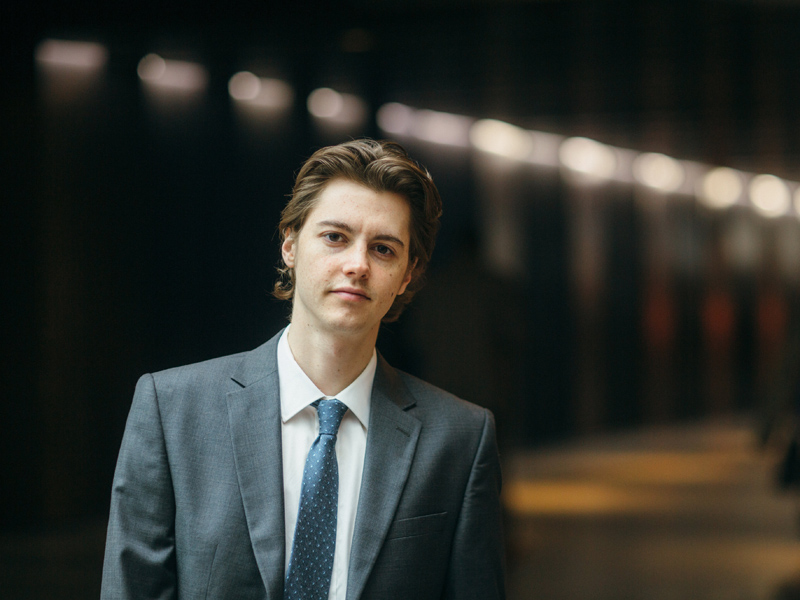 Born in New Westminster, British Columbia, Hirzer has performed across Canada, as well as in the United States, Germany, Austria, Italy, and Switzerland. In the spring of 2015 traveled to Calgary to audition for the role.

“There was a set selection of repertoire—four pieces that we had to rehearse with the orchestra. It was a 45-minute rehearsal where you were expected to make it through all of the requested repertoire and stop and rehearse the orchestra to display your approach to rehearsing. That’s a huge part of being a conductor—being efficient and effective in rehearsal.”

Two days later he took part in a lengthy interview process where he was grilled by Calgary Phil staff members, who are now his co-workers.

“It was a good experience and I felt that the audition went well,” he continues. “I felt pretty good about my prospects of getting the job going back to Montreal. But you never know about these things.”

Through youth and exuberance, Hirzer brings a fresh outlook to the Calgary Phil at a very important time in the organization’s history.

“I think that the orchestra in general is really trying to branch out, to break out of its shell and try to reach new audiences, try to explore kinds of new repertoire,” explains Hirzer. “And there’s a whole bunch of young, energetic musicians coming into the orchestra. We’ve got four new first violinists who won positions in an audition that happened already this season. We have a new music director designate, Maestro Rune Bergmann is supposed to arrive full-time next year.”

Add in new members of the administration team and the recently announced appointment of Dr. Vincent Ho as the new Music Advisor, 2016 marks a huge moment of transition.

“What it means for the orchestra is to have this feeling of freshness, of new beginnings,” says Hirzer. “And I think there is a lot of excitement within the organization moving forward.”

As for what Hirzer is most looking forward to coming up, one of the concerts just happens to take place this week.

“In earnest, the concert coming up this week is going to be really exciting,” he says. “It’s Cirque Musica and I think it will be one of the more extravagant spectacles I will be leading throughout the year. We’ll actually be joined by circus performers on stage for a concert that features both holiday music and more classic favourites.

“Then there’s another concert I’m conducting in the winter that’s The Second City Guide to the Symphony which is a comedy show where I’m sure I’ll be targeted as a victim of humour,” jokes Hirzer. “It’s hosted by Colin Mochrie—I grew up watching him on Whose Line Is It Anyway? and This Hour Has 22 Minutes.”

The Calgary Philharmonic Orchestra continues its 2016/17 season until June 17, 2017 and the full schedule can be found at calgaryphil.com.