Studying engineering at the University of Hanoi is not the usual training for a costume designer, but not much about Kien Phi Ly’s life has been usual.

The Vietnamese-born, Chinese-Canadian, longtime (since 1981) Calgary native doesn’t worry too much about formal training, because whether it’s sewing, dressmaking, painting, costume design, creating sculpture out of found objects, or even working out, he has been training himself to live creatively, and build—at the age of 71—an Alberta lifetime of memories of an awesome and amazing life creatively lived.

Kien and his family were exiled from Vietnam in 1978, because they were Chinese (the two countries were then at war), forcing them to give up all their belongings. After spending a year in Hong Kong in a refugee camp, where he worked during the day and returned home to the camp each night, Kien and his family were offered relocation to either Australia, the United States or Canada.

In 1980, he relocated to Sicamous, British Columbia, then in 1981, to Calgary, where he spent the next 23 years working as a caretaker at SAIT and in the Calgary public school system.

That would be enough of a wild ride for most lives, but Kien had a whole other creative life that he had on the side, that started, in one part, when he taught himself to sew.

“When I first came here to Calgary in 1981, I needed clothes,” he says. “It was difficult to buy clothes that fit me, so I decided to learn how to make them.”

He had help along the way, too.

“My friends said, I want to buy something for you,” he says. “What do you want? I wanted a sewing machine. So then I bought one and some material and started making clothes. Then I saw somebody selling clothes they made, so I decided to do that too.”

That hobby led Kien to make the trek each Saturday to Millarville, where he rented a table at the local flea market.

He learned what to make by seeing what the most popular vendors were making and he learned how to make similar things by calling upon the skills he learned back in Hanoi, when he designed bridges and other infrastructure that needed replacing because of the war.

That included one weekend, when some hide traders from Lethbridge rented a table next to his, which inspired Kien to trade some of his originals for some of their hides.

“Kien bought them, and made himself jackets,” Hobson says, “and a fur coat. It was this bartering thing.”

Then, using a designer fur Hobson had acquired on one of his trips to New York or somewhere glamourous like that, Kien created his own knockoff of Hobson’s luxury fur—for a total cost of around a hundred bucks.

“It’s funny, you look at the two coats from a distance,” Hobson says, “up close, you can see the difference between a $6,000 fur coat and the one he made—but from a distance, they look the same, because he patterned it after mine.”

At the same time Kien was making a name for himself as a tailor and painter, Hobson was living a creative life of his own, directing plays—including a few he wrote himself, such as one 19th century period piece, Monster Makers, which explored the relationship between Mary Shelley, and the poet Byron.

“We knew we could leave it up to him,” Hobson says. “We trusted that he would do the research, that they would be the right period, and the right style—he has a real fashion sense, but he also understood what the stage needed. They weren’t exactly the clothes that Mary Shelley and her friends would have been wearing in the 1800s, but looked like them onstage.”

Kien even designed animal costumes for a productions of both Charlotte’s Web and The Jungle Book that Hobson directed for Storybook Theatre.

“He had to do them so that they were for kids,” Hobson says, “for children’s theatre—recognizably animals—but without having them be like mascots, with the big heads, and that type of thing—they had to give the actors great mobility. He came up with the most intriguing costumes.”

That all led to Kien being hired to create Mongolian costumes for the HBO feature film Burn Your Maps, which was shot in Calgary in 2015, which starred Vera Farmiga and Oscar nominee (for Room), eight year old Jacob Tremblay.

Kien also takes frequent trips back to China, where he discovered a popular television show that featured a man who taught novices how to paint.

It wasn’t such a stretch from the drawings he created in order to sew clothes.

“I liked drawing, so I got into painting,” he said.

That led Kien to another popular weekend market, this time at a church in Bearspaw, where he could rent a table and sell his paintings—some of which he got the inspiration for by visiting Kmart. 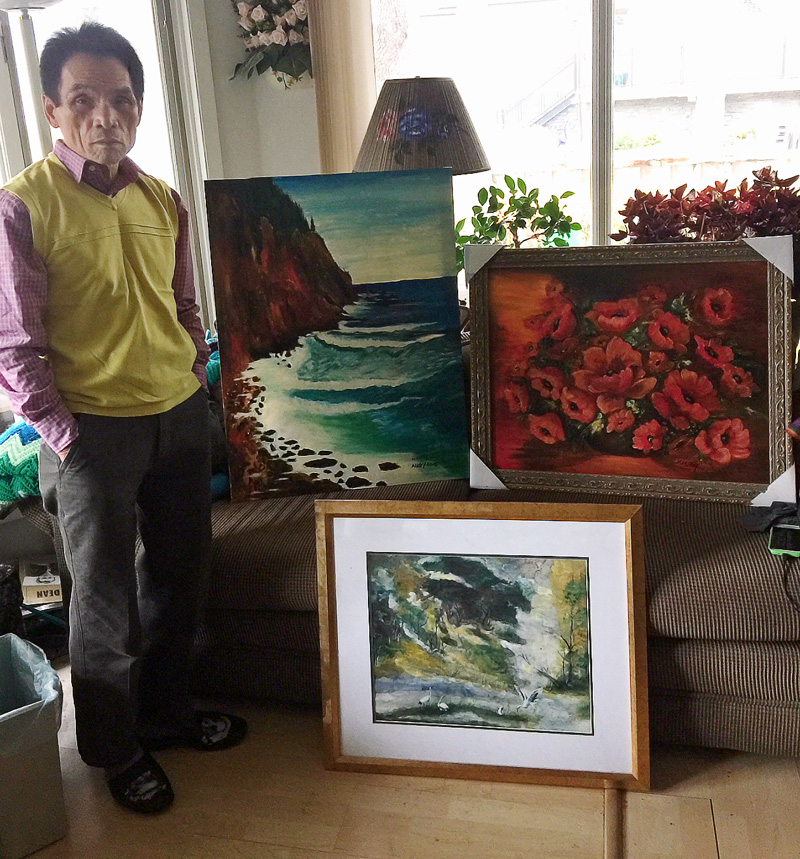 Now in his 70s, Kien still travels frequently back to China. When he’s in Calgary, he works out for two hours a day at a pool in Renfrew, where he has built a whole new community of workout friends.

“When he finds a piece of driftwood, he can see it as a horse or a woman or a bear,” he says. “When we went to a family wedding in Cancun, Kien saw local artisans painting on tiles with their fingers. The next thing you know, he’s doing it too! He’s completely self taught. A friend who is a teacher saw Kien’s tiles and asked him to come in and teach the technique to her students.”

He also is a bit of a physical miracle, someone who remains active and engaged by a life that took many twists and turns over the course of seven decades. At 71 he has even joined a hiking club to explore Alberta’s back country returning with photos to inspire new paintings and driftwood for new sculptures.

“That really keeps him young,” Hobson says. “And the painting does too. And he’s met people of like mind—other people his age or just a little bit younger who are also doing crafts, or painting, things like that. So suddenly you get a whole new group of friends, or acquaintances.”

As to why it matters to live a creative life? Kien says that’s an easy one to answer.

“I love to do it,” he says. “I see something I like, and then I try to do it. Even if I just see a piece of wood, and try to make something out of it.