Lauren built a robot out of a broken toothbrush.

Ashley designed a dress with wearable technology attached that makes it light up.

Together, the Voisin sisters are the Calgarians behind Robots R Fun, an innovation incubator unlike any other.

Since they live together and are home-schooled by their parents, the source of their innovations is pretty straightforward.

“Usually we start by brainstorming,” says Lauren, “like, oh! This might be cool to have in here. What about this? Then we just talk a bit about it [and] see what we come up with.”

What they’re coming up with are fun, innovative, inexpensive entry points for other kids to experience technology and science—particularly girls, who have long been relegated to the scientific sidelines, in favour of nerdy boys.

The bot that first shot Robots R Fun out of the cannon was the Brushbot.

“That was the first robot that I built” says Lauren. “I had taken apart my toothbrush, because it broke. [Then], I thought, why not build a robot out of this? I cut off the little brush—because it was very unstable.

“I put the motor on,” she continues, “and figured out how to stick the battery on, without any tape or anything—I think I used Superglue or something like that. It wasn’t too stable. It kept tipping over. I added a more stable brush after testing it, and added a battery case with a switch so kids wouldn’t get shocked.”

Lauren also described her project from last year’s Maker Faire, which was a 30′ long laser maze with a puzzle room. “It was designed to spark kids’ interest in electronics, because all of the puzzles could be made with a basic to intermediate level of knowledge.”

“You made all of the walls,” Lauren says.

“I designed all of the walls,” Ashley adds.

The girls are currently adding a store to their website so that schools or parents or children will be able to order one easily.

“Anyone can build a robot,” says Lauren, “but I think I’m mostly trying to get kids interested in technology.

“That’s my goal,” she adds, “that everyone can at least have a chance to figure out how tech works. They can see if they like it. At a young age.”

The young robotics innovators even tried to hire a factory in China to manufacture Brushbots, although that ended up being a no-go, after many months of middle-of-the-night phone calls.

“They asked me if I needed any printed circuit boards for my robotics kit,” Lauren says, “when they had a kit right there in front of them. I was like—what? You don’t understand what this about!”

It turns out that Lauren has always had a fascination with trying to figure out how things work, says her mom.

“We still have some crib toys [that she pulled apart],” Jacqueline adds.

Meanwhile, Ashley is finding ways to put sustainable into style. She has grown a purse, which she created for MakeFashion, a local meeting of technology and style spun off from the city’s growing maker movement. This year’s MakeFashion Gala was April 1.

“You put kombucha in a glass container,” she says, “And then you wait for a little while. Eventually, it will start to form a layer on top—a kind of leathery type fabric. And after a while, it will get harder, and form a leathery texture.

“It grows,” she adds, “and because you put it into the container, it grows into the size of the container. Then you can form it however you like it after that.”

That’s the follow up to Ashley’s first MakeFashion effort, which was a dress unlike any other.

“I made a Wizard of Oz kind of dress,” Ashley says. “The fabric was brown-silvery rusty steel kind of look.

“It’s also pretty stiff,” she adds, “so it kind of looked like metal, like the Tin Man—and then I had a sash that was [designed to look like] a tornado and it had LED’s that lit up.”

The Voisin girls have already participated in a number of Mini-Maker Faires in Calgary. They like to hang out at maker spaces like Protospace and Archeloft, and brainstorm with other members of the Calgary maker community. And two years ago, Lauren spoke at the largest Maker Faire in the world, in San Mateo, California in front of an audience of leading digital innovators. 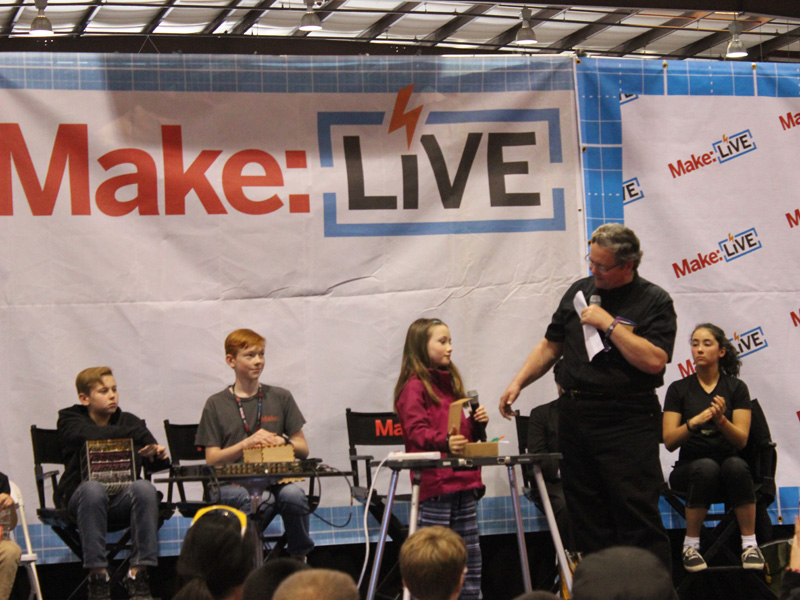 Lauren with Dale Dougherty, founder and Chief Executive Officer of Maker Media Inc., at a Maker Kids panel | Photo: Courtesy of The Voisins

“It’s fun to go to stuff like Maker Faire,” Ashley says, “because we get to meet different people and talk to people who make awesome things.”

“It was very exciting,” adds Lauren, “Everybody was into tech, and making stuff… Maker Faires are very inspiring. [They] help me come up with tons of new ideas.”

That’s when Lauren’s mom, Jacqueline, reminds her that there were people there from all over the world—and some who have explored horizons beyond this world.

“There were people from NASA there,” Lauren says, “which was really awesome. I like space.”

Would either of them consider the possibility of working for NASA a potential career?

Ashley says, “That would be cool.”

And when they aren’t devising and innovating new bots—the latest is the brainbot, and something Lauren calls Luminate—they’re also launching a tech lending library of sorts. It includes a digital microscope and a drone they say they’ll lend out to any kids who want to try them out.

How much would they charge to loan the drone?

It turns out that even though teens love their phones, teens and science don’t fit like a glove.

“It’s kind of hard to get teenagers interested in tech,” Ashley says.

“Especially girls,” Lauren says, “because they think it’s so uncool.”

What do girls say when they hear about what Lauren and Ashley are up to?

“Everyone is always focused on SnapChat,” Ashley says. “I have that stuff too, but I’m not as focused on it as other people.”

All of which begs the question: Do the other kids make the Voisin kids feel like freaks?

“Not all the time,” Lauren says. “Sometimes.”

Give it time, Jacqueline says.

“You guys started when you were young,” she says. “[Ashley and Lauren] can kind of see the bigger picture, which might be a little uncool now, but in three years, it’ll be very cool again.”

Maybe the solution is to turn Robots R Fun loose and let them see what they come up with.

“Right now our future goals are to launch a few more aspects of our company,” Lauren says.

The future for the Voisins includes more mingling of fashion and technology.

“My MakeFashion Dress is going to be a sort of Little Red Riding Hood,” Ashley says. “It’s going to be a coat with sensors on the shoulders that will make the hood go up when it rains.”

“I might try to find some quarter rotation servos for you,” Lauren says.

“And then,” Ashley adds, “I’m also going to have the purse that I can grow.”