Lisa Murphy-Lamb took that Virginia Woolf line about having a room of one’s own one step further.

She built a literary community of her own.

The Calgary writer, arts champion, photographer, and educator is also the founder of Loft 112, one of Calgary’s true literary hubs.

In the four years since it started, Loft 112 has grown into a uniquely Calgarian literary hotspot, forming partnerships with organizations such as Alberta Printmakers, the Calgary Public Library, and Beakerhead, all while creating a nurturing space for emerging Calgary creative minds.

Murphy-Lamb has personally lived a creative life for many years, whether in Calgary or in Houston, where she lived for a number of years with her husband and two sons

She wrote a nonfiction book that was banned by the same Houston school board that she taught in. She didn’t wait for the time to be just right to live a creative life. She just plunged right into it, in the middle of raising her sons, being married, teaching, and doing all the other stuff that chews up 98% of a person’s life.

Loft 112’s genesis came about when Murphy-Lamb was facilitating workshops for young writers, and was constantly struggling to find someplace to hold them.

“Whenever I had to work with a group, or interview anybody, or meet with people, it was always in public spaces,” she said. “There’s lots of wonderful public spaces—but sometimes you need a space, and you need one that’s affordable.”

In the four years since she founded Loft 112 in the East Village, Murphy-Lamb has watched as the neighbourhood has transformed, through massive infrastructure and real estate developments that are opening all around her—including the National Music Centre and the new Calgary Public Library, both of which are about 100 metres from her door.

Before those institutions came along, however, Loft 112 was already there, championing the local in programs such as Inner City Stories, a night where writers gather at the loft and share Calgary stories.

That particular project sprang from a desire to give a narrative to the neighbourhood.

“We want to write about Calgary as a place to set stories—and we want to remember them,” she says. “It also sprang from the East Village too, because it is a place that is being absolutely transformed, and sort of the overarching story now, is we’re building it from nothing.

“For us, it’s so important to remember that there are many layers of stories… and sometimes the storytellers are the seniors who have been here for many decades.”

The great irony of it all is that creating a popular literary space that nurtures hundreds of Calgary creative lives hasn’t really helped Murphy-Lamb live one of her own.

“You would think being in a creative space, being surrounded by creative people, that it would just happen,” she says. “I wish that were the case.

“Running Loft 112, one of my biggest disappointments is that I’m not living as creatively as everyone around me,” she adds, “and sometimes, I’m quite bitter, seeing everyone around me living creatively and I’m dealing with invoices and cleaning the toilets after they leave—because that’s the reality of running an artist space.” 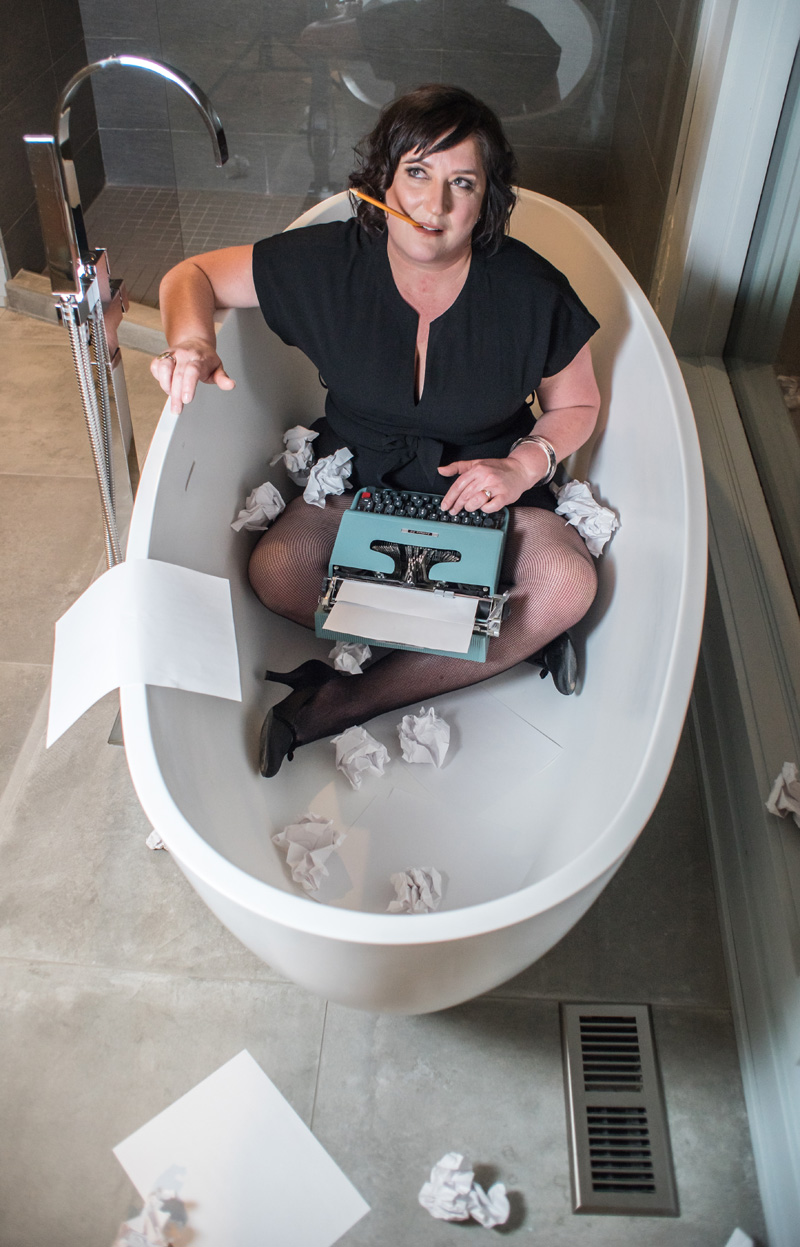 It turns out that in order to reconnect to her creative life, Murphy-Lamb needs to escape from her success story.

“I have to leave,” she says. “so I can stop writing emails and stop filling my head with those kinds of tasks.”

She has a different sort of space in the Crowsnest Pass—a cabin with no TV, no internet, no distractions.

“It’s a great place to go write and read,” she says, “and that is the place I can go to actually get into writing for hours at a time, and not just a half hour, or think about it, or dream about it or have the intention of doing it, but actually doing it.

“I’m always surprised at how fast eight hours can go by when I’m there and that I’m actually able to sustain an entire day devoted to writing and to reading without meeting any distractions,” she says. “That’s how I need to do it.”

It worked—Murphy-Lamb’s first novel, Jesus on the Dashboard, was published in 2017 by Stonehouse Publishing.

She’s also searching out creative ways to manage the administrative tangle of her life while still maintaining the creative buzz that hums from Loft 112 out into the streets of the East Village year-round. She named Igpy Kin as an artist in residence, so that Kin can handle some of the curation of various events at the loft, such as Night Writer, and to read submissions for various anthologies or events.

The new library will soon open, transforming a couple of city blocks that used to be not much into a true literary community—a situation that suits Murphy-Lamb just fine.

“We’ve done a lot of partnerships with the library, we have a nice relationship with them,” she says. “Librarians are pretty darn good people. And that was one of the reasons we moved into this place, because the library was right there. So, yeah, we knew they were coming. We knew we would be neighbours. Eventually.”

There’s no need for Murphy-Lamb to consider why she lives a creative life. There’s simply no alternative.

“So you can get up in the morning,” she says. “So that you can look at the world that’s crashing around you and see the light on the other side of the street—so you can love your neighbour, despite their barbs. So you can problem solve.”

“Empathy is a big part of it,” she adds, “because… it’s a gateway into so many different perspectives.”