How do you connect a museum to its community?

That’s the question the people who run Lougheed House ask a lot these days, as they try to find the connective threads that tie their museum—located in a mansion that looks as if it beamed out of some 19th century Jane Austen novel—onto 13th Avenue, in the middle of Calgary’s 21st century, highly contemporary, millennial-dominated Beltline neighbourhood.

The house is a treasure trove of historical artifacts, art, and the personal history of one of Alberta’s truly iconic families—all of which unfortunately tends to make it feel a bit forbidding for the neighbours to just drop by, says Lougheed House curator Carolyn Loewen.

“The building itself is imposing,” Loewen says. “It’s this sandstone mansion. That is, itself, a physical barrier for people to walk into a museum—a lot of people may think of it as a symbol of colonialism.

“It’s from the 1890s,” she adds. “It was built by a very wealthy white man from Ontario, originally from Scotland—so it’s got this very colonial narrative and that can be intimidating and imposing.”

And let’s not even talk about trying to get a younger demographic interested in artifacts in the age of endless digital distractions.

“How do you try and break down those barriers?” she asks. “I guess that’s what we’re trying to do.”

“I feel like as house and museum professionals, we’re expected to hold authority over things,” says Amanda Foote, Lougheed House’s Visitor Experience Coordinator. “We were really trying to give that up—and there was a little bit of reluctance [on the part of patrons] to do that.”

All of which leads to the question: How do you take all those digital culture muscles and apply them to what is essentially a highly 19th century way of engaging with information?

Welcome to Lougheed House’s Altournatives, where the traditional museum tour was reinvented in a 2017 small experiment, by handing storytelling duties over to the visitors themselves.

“Basically,” says Loewen, “we had the idea that we wanted to invite community members into the house to develop their own stories—or stories connected to the house.”

The idea was to connect with a variety of neighbours—both personal and institutional—that represented a rough approximation of the Beltline’s diverse demographic, and offer them the opportunity to host their own tour of Lougheed House, incorporating their own personal histories into it.

“We’re all really interested in co-creation,” Foote says, “and finding new ways this space can have real meaning for people—and we feel like that probably rests in people being able to tell their own stories, and seeing their own stories reflected back to them when they visit.”

Four different tours were chosen. There was a group of students from Connaught School; a man who’d experienced homelessness who lived at The Mustard Seed; a recent Colombian immigrant named Richard, who was an animator at Quickdraw Animation; and Camille, a senior who lives in one of the heritage apartments next door to Lougheed House.

Each one was free to go through whatever artifacts or documents the Lougheed House possessed. They were also equally welcome to incorporate their own Calgary history into the tour.

“They came in and got introduced to the house,” says Foote. “And I gave them the tour we usually give visitors.

“Then,” she adds, “we also introduced them to some of house’s collections and archives and library here, which have so much Calgary history, and asked them to think of what stories they thought the house could tell or should tell to combine their story with the house’s story.”

What the museum pros discovered was that there are as many ways to talk about Calgary’s history as there are Calgarians. 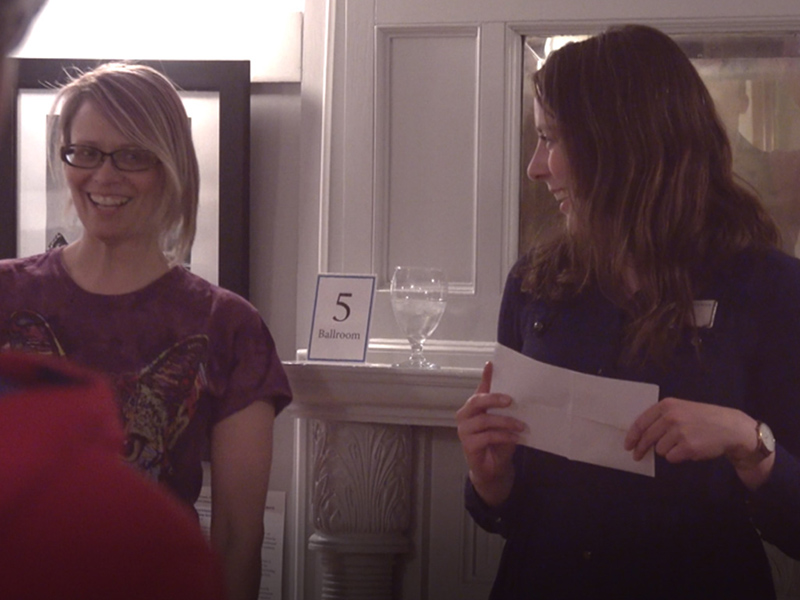 “Camille was really interested in her great grandmother’s history,” Loewen says, “so she talked a lot about women’s history and artists that may have been working here at the time that the Lougheeds lived here—which was very a different story from Robert, who lived here in the neighbourhood in the 90s,” Loewen says.

“He saw the house being reconstructed and preserved and the whole site undergo this transformation.

“At the same time, he saw a lot of change in the neighbourhood—a lot of houses being torn down—which showed the contrast between what we’re [as a city] preserving and what we’re not.

“His theme was the house as a witness to history—he was interested in the history of the neighbourhood.”

Contrasted to that was the history of the city and the house as seen through the eyes of David, a recent Colombian emigre.

“David’s tour was comparing himself as a new immigrant and the house as a place out of time,” Foote says. “He works with images, so he was going through some of the images and layering images of the house history on top of each other.”

To top it all off were the tweens from Connaught School.

“The students gave a tour that was just a good deal more fun than a bunch of adult interpreters who are interested in history from the academic sense—they took a lot more personal interest to the tour,” Foote says.

“They definitely latched on to the things they found funny or interesting,” Loewen says. “Like bathrooms. When Lougheed House first was built, a lot of people had outhouses—but this was a fancy house, with indoor plumbing and indoor bathrooms.

Whether the tour changed the way the community feels about Lougheed House remains to be seen—although it was completely sold-out, and received a 2017 Alberta Museums Association Leadership Award for Engagement.

What’s indisputable is that the project—one of a number Lougheed House has undertaken over the past several years to shake up and contextualize its relationship to the community—shed a little light on how people interact with museums now.

“One of the outcomes that surprised me—or I’d hoped for but didn’t think we’d get it—was how meaningful the experience was for the people who were giving the tours,” says Loewen.

“At the end of the tour, some of them were almost in tears, because they felt so proud of what they had been able to do.

“That was an amazing feeling for me, and I think for Amanda too, to see that,” she says, “because we really did want to empower people to feel their story was important.

“It was meaningful and empowering, which was amazing being able to give to people.”

Maybe, just maybe the psychological barrier that separates the community from Lougheed house and its neighbours lowered a notch.

“The thought behind that is the idea that we are a museum, we make history—and then we deliver history to the people,” adds Foote. “But actually… it’s all of us.

“We’re all responsible for it,” she says. “We can all benefit, and use it in different ways—it’s not this elite thing that only museums get to do.