In a 21st century information universe where data is power, Mathew Stone and his business partners have mastered the business—or is it an art?—of transforming research and data into a page turner.

He’s one of the principals of Stone-Olafson, a Calgary market research firm whose clients include, among many others, the Calgary Stampede, Calgary Economic Development, MIT, Princess Auto, Co-Op, Enmax, and the Calgary International Film Festival.

What distinguishes Stone-Olafson is that they don’t deliver a pile of market research on the desk of clients and let them translate it into a heap of reality.

“Our firm is a research firm,” says Stone, “but it’s not really a research firm. What we do is take facts and take information, and bring it to life for people.”

It’s interesting to talk about brands, because brands are a little like people, or pop stars: Once we get familiar with one, it tends to be stuck in our imagination in a single, fixed loop.

But companies understand the same thing as Beyonce—the only way to thrive in a crowded marketplace is to reinvent yourself in people’s minds as your organization, or team, or city, or your career, evolves.

When a company, or institution, comes to Stone-Olafson, they are subjected to a four part analysis, he says.

“One is, what do they stand for?” he says. “[Second], what’s their cultural DNA?

“[Third], we look at the experiences they deliver, and not just what are the products and services, but also, the benefits.”

The fourth thing is external—what do people think about them?

Then Stone and his researchers put it all into their market research blender and come out with an analysis.

One example of a brand that has successfully reinvented itself over the past few years, he says, are the Toronto Raptors (although not a Stone-Olafson client).

The Raptors—with a little help from rap superstar Drake—changed their look, their feel, and ultimately their game. They’re now one of the NBA’s top five teams, and pull impressive ratings across Canada in addition to sold-out crowds at home.

“That’s partly a result of the We the North thing [the team’s new slogan] and edgy view of the raptor [their revised jersey logo],” he says. “They’ve gone away from that cartoon raptor—it didn’t really resonate, I don’t think—and then they moved to that imprint of the claw which is just everything. And [add to that, the slogan] We the North’s positioning—I think it’s just a great thing.

“It rallies people around an emotional side to it,” he says. “It conveys the type of game they want to play and does it really really well.”

When he’s not breaking down brands, Stone tries to take time to rebrand his idea of himself by living as much of a creative life away from the office as he does inside it.

“I spend a lot of time working with my hands,” he says, “so whether it’s stained glass or working with structural design or welding.”

That includes a 200-sq.-ft. back patio at his Calgary home that also features a stained glass mosaic he made himself.

“[It’s] real physical to make,” he says. “You can pick it up and feel it and look at it. It’s more arts and crafts than real art but it gives me something to do. I’m taking a glass blowing course—that’s my next thing this summer—trying to figure out how to mix it with welding.” 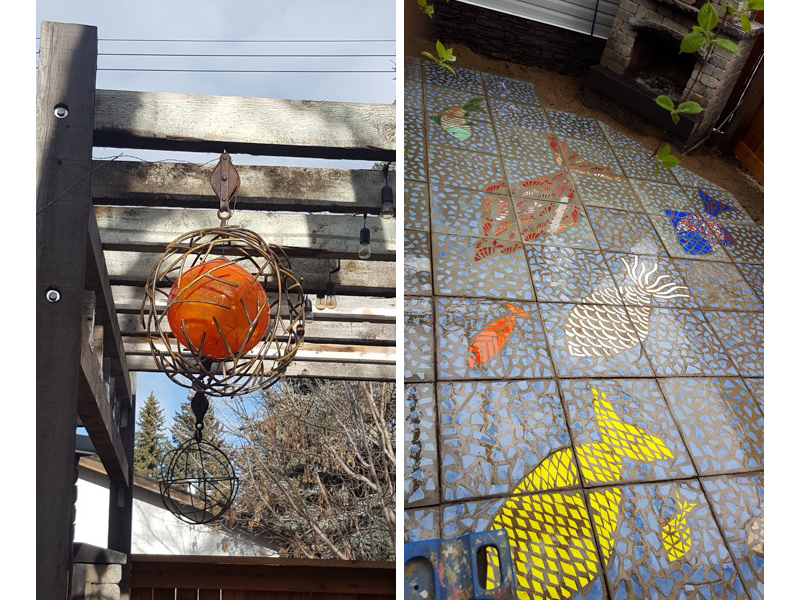 A couple of projects Stone has created including his patio | Photos: Courtesy of Mathew Stone

Working with stained glass also is a form of creative activity that gives Stone the opportunity to work and think more about colour, and how it shapes our perceptions of everything—even companies.

“Glass is interesting,” he says. “It’s one of those mediums that’s fascinating, because the molecules of glass are always moving. Even if you look at it in super slow motion splits, right? It’s alive. It’s really cool.”

Sort of the same way organizations and events that may have implanted themselves in our minds keep moving, as well.

One recent success story appears to the Calgary International Film Festival, which has been on the upswing since Steve Schroeder took over.

“They’re an awesome client,” Stone says. “I have a whole lot of time for them, because they’ve taken a great product and looked at in a similar way Stampede does—Stampede doesn’t get credit for this but—asking what’s the experience our audience wants and then really focusing on that.

“Most film festivals,” he adds, “even CIFF, five years ago—the experience was wrapped up entirely in the film they were showing. If the film selection wasn’t great, then the festival [experience] would have suffered.

“They’ve taken that event,” he adds, “and said OK, we’re going to add to it by including additional user experience—and making sure they care about how people arrive [at an event], what happens when they go into the theatre, how they buy tickets and [all that film festival experience] stuff.

“It’s all boring [to the average person],” he says, “but it’s important for an organization presenting public events to think about—and then they turn it into a creative experience.”

And if Calgary was a company, or a festival, what advice would he give it about its brand?

“I would say to thy own self be true,” he says. “There is an energy that defines Calgary and makes it different from other cities—that’s at the core of what we are.”

“Be authentic,” he adds, “and make sure you’re expressing the things that are strengths and share it—don’t hide it.”

Which, in its own way answers the question of why live a creative life?

Namely, because whether we like it or not, we all have a story and we’re sticking to it—and it’s Stone’s job to help shape the story of his clients, so that the ending comes out happy for all involved.

“Other research firms provide facts,” he says. “We use facts to tell our stories, but we still tell stories. That’s how you make research relatable—and [get] people using it. Otherwise, they just bury the data on a shelf.”