How do you grow a community out of a whole world full of different ones?

That’s a question that popped up frequently in the offices of Marichu Antonio, the Executive Director of Action Dignity—formerly the Ethno-Cultural Council of Calgary—an organization dedicated to working with culturally diverse communities from every corner of the planet to negotiate what was often an unwelcoming, challenging and highly racialized Canada. Many of these communities have made Canada their home for more than a century.

In Calgary, that meant working with more than 70 different cultural communities.

Antonio, a political activist who immigrated to Canada from the Philippines in the mid-1990s, was one of the founders of Action Dignity, at a time when there was little open discussion of racism faced by newcomers and racialized Canadians—and even fewer resources to help combat it.

“Racism was not openly talked about except by ethno-cultural people,” she says. “Even the various anti-racism organizations were marginalized.”

The impetus behind the creation of Action Dignity was to bring all those disparate communities together in order to help build a community of communities, that could speak to the needs of newcomers and racialized Canadians—because if they didn’t find a way to do it as a group, they would be forced to do it as a thousand splintered individuals, each being forced to navigate languages, cultural norms and a vast, often mystifying myriad of public agencies and institutions in order to be included..

In other words, if one superhero can have a little bit of impact on the system, imagine a community organization filled with Avengers!

“We’re not like all the other immigrant serving agencies,” Antonio says. “We don’t do direct individual service.

“We want to look at public awareness, public perception, the way policies are made, the historical roots of the problems and the issues—we do a lot of research, leadership training and we really want a unified voice for these ethno-cultural communities to talk about big picture change.” 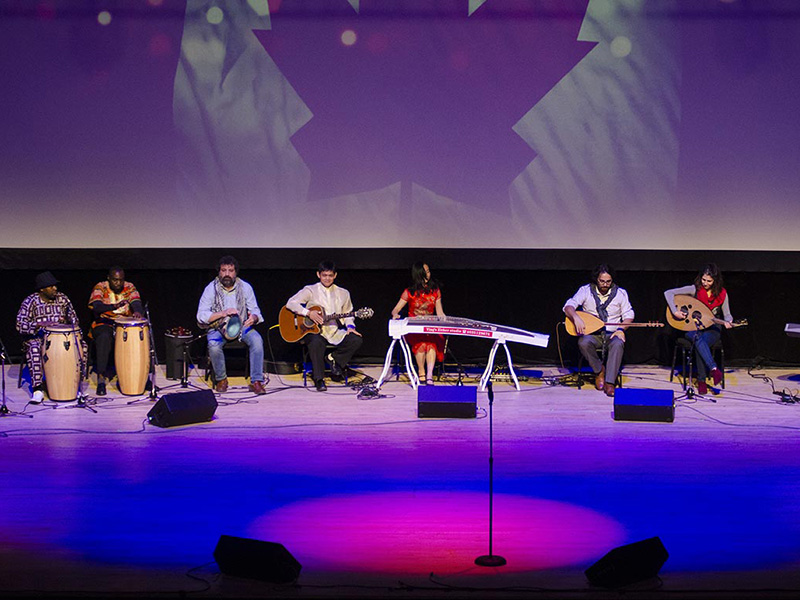 15 years later, the organization was succeeding in its own way—in the same year Canada was throwing itself a sesquicentennial party.

“We’re celebrating 15 years,” Antonio says, “and we thought, what could be a more meaningful way to celebrate 15 years than to put on a show?”

She also had a sneaking feeling that some of that big picture change her organization sought to make might be achieved through art, aside from its usual way of spreading its message.

The thought was that maybe by telling a lot of different cultural stories, what would emerge was one, beautiful—and occasionally painful—big picture vision of Canada’s origin story.

“There are different ways of educating people or talking about people’s perceptions or talking about how welcoming or unwelcoming Canada is,” Antonio says, “but the power of stories of arts or culture—especially if the actors have the lived experience—you cannot question the message that’s being relayed to the audience.”

Then, they decided, the show would honour the Indigenous experience as well.

“We said, if we’re celebrating Canada 150, we have to start from the time—thousands of years—before the colonizers came,” she says.

That impulse became a reality when Antonio connected with Arts Commons President and CEO Johann Zietsman, who offered her the use of Jack Singer Concert Hall for a weekend. Arts Commons has long provided the organization with free tickets to its World Stage concert series, which are distributed to Action Dignity participants.

There wasn’t really enough time or money to undertake planning and producing and marketing an event that the organization had never attempted to do before, but she did have to pay for a technical crew and people to produce a two-hour live show—about $55,000 worth.

Long story short: through a lot of hustle—including receiving funding through Calgary Arts Development’s ArtShare program, The City of Calgary, the Calgary Foundation, and donations—they managed to cobble together the production budget. The plan was to incorporate cultural performance with a narrative exploring some of the struggles of the newcomer experience, but it was challenging to find the right blend of historical context, cultural performance, and narrative—in fact, it was downright daunting.

The organization was in the middle of a rebranding effort, and marketing a show was a huge challenge—but even so, in mid-December, they performed their show Our Canada, Our Story over a weekend.

It not only explored the Indigenous experience, but also Chinese, Syrian, African, Filipino, Vietnamese—even Ukrainian—newcomers trying to find a place in their new country.

It worked. Our Canada, Our Story told stories—through a combination of song, spoken word, theatre, dance, and multimedia presentation—that were real, in a way that revealed universal experiences.

Even though some of the stories were dark, there was an undercurrent of possibility, of humour and humanity to the entire experience.

“Some teachers were there,” Antonio says. “There were two who said, that’s a good history class for our kids!

“Why don’t you approach our principal and then we’ll include it in our curriculum?” 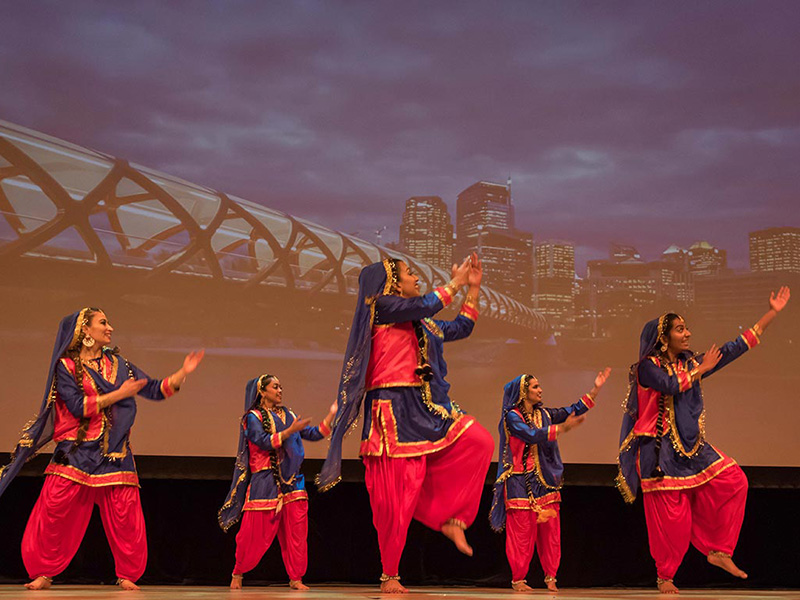 Antonio now has a new task—namely, connecting with the city’s theatre community to see if there’s a way to shrink down Action Dignity’s big, pageant-sized two-hour-long Jack Singer holiday special to a size that can travel lightly (and less expensively) to schools to be performed for children of newcomers, so that they might see and hear themselves and their stories reflected on a stage.

Our Canada, Our Story even connected with audiences who didn’t necessarily share the newcomer experience.

“We got a lot of great feedback,” Antonio says. “Even Ken Goosen, Producer of GlobalFest was there. He sent us a message saying, it’s a brilliant production! A wonderful afternoon of entertainment and education.”

“Even Caucasian families said they were not antagonized by the way the history of racism was portrayed,” she adds. “Because sometimes, when you talk about racism, you make people feel defensive—but this one, no. They didn’t feel that way.

“For example, the Vietnamese actress brought her fiance, who’s Caucasian and he brought his family so they would understand the historical context of their future daughter-in-law.

It’s not what Antonio envisioned when she, with many other community leaders, launched Action Dignity as the Ethno-Cultural Council of Calgary 15 years ago, but maybe it’s even better—that big picture, it turns out, includes more people than she ever imagined it would.

“This is our opportunity not only to voice what’s happening but to partner with a new range of communities,” she says. “To engage those who are not experiencing racism too—also to advocate for a more welcoming community.

“It’s more effective if you include people who are not experiencing it to be the voice too–to protect and uphold the interests and rights of racialized communities.”

It’s been a decade and a half of fighting to create a system that gives today’s newcomers and racialized Canadians a fair shake, but it behooves us to remember that for centuries people have migrated to this land searching for exactly the same thing.

“That’s why we changed our name to Action Dignity,” she says. “When we broadened the issue of equity beyond racialized communities—to include seniors, regardless of their colour, youth who are also being discriminated against, artists, LGBTQ2, youth, the disability sector, and people living in poverty—all of these are equity-seeking groups looking for dignity.

“And we don’t just talk about dignity,” she says. “We do something about it.”