When Paul McIntyre Royston’s photo appeared in the pages of the Calgary Herald recently, two different aspects of his creative life collided in the same story.

Royston, who is the President and CEO of the Calgary Library Foundation, was announcing the availability of the foundation’s Arts and Culture Pass, a program that makes free tickets to arts events around the city available to low income (or no income) Calgarians.

“It’s an exciting program,” Royston told the Herald, “because art just makes life better. It promotes depth of experience, it increases happiness and quality of life.”

At the same time, Royston’s photo revealed the most recent results of The Fat Project, Royston’ own personal multi-year, multi-media project (in conjunction with Calgary’s Roadwest Pictures) to chronicle his journey from somewhere north of 400 pounds to something much less.

Since launching The Fat Project, which includes Royston posting Instagram photos of every meal as he attempts the daunting task of eating better without giving up any of the food he loves, nine months ago, Royston was already 85 pounds lighter.

“My photo was in the Herald,” Royston says,  “and they did a video [as well]—and I had like 20 people message me and say Paul, is that you?”

For Royston, who lives a very public life raising funds for the Library Foundation, which involves luncheons, dinners, attending conferences and speaking at various events, it was a moment of validation.

While he is far from finished—he anticipates The Fat Project lasting up to three years—it was a sign that something is going right.

“It’s funny,” he adds. “I’m having trouble recognizing myself.

“You look in the mirror and you go, is that me?” he says. “And I’m still 335 [329 at press time] pounds—I’m a really big guy—but losing 85 pounds, and my body shape changing tremendously, I guess you can see in my own self-reflection—so I guess that actually helps and hinders me because you’re like, oh, maybe I’m done [losing weight] now!”

What distinguishes The Fat Project from other lose-weight-quick schemes is that Royston is doing his best to look at it as a lifelong transformation—something that means changing the way you think as much as the way you look.

“What I’m trying to do with this story,” Royston says, “is make it as holistic as possible and as real as possible. There’s no after pictures. There’s always just a before picture.

“This is deliberately a three year, slow process,” he adds, “of watching that evolution.”

With an eventual target weight of 185 pounds, Royston has created an Instagram account, thefatproject, which has become a kind of daily visual journal of his journey.

“It’s every meal I eat,” he says,  “because I want to be able to look at what those things are. I have some special art projects planned for those photos—it’s 1,500 in eight months—so I’m going to end up somewhere around 5 or 6,000 meal photos. I’m going to do some different things around [the question of] what this guy ate for that amount of time.” 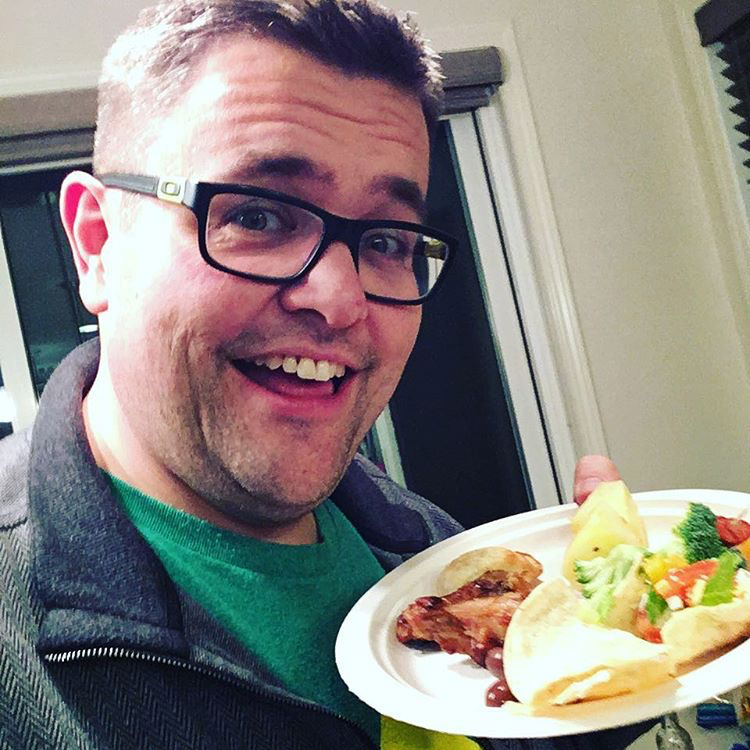 Underneath that fascination lies a controlling idea: namely, that by looking more closely at the food he eats, Royston will be able to reclaim his power over it.

“As soon as you look at something,” he says, “you affect it—and that effect cannot be undone. Now that I’ve looked so intimately at my relationship with food, I can’t undo that, I can’t unsee that. It’s one of the reasons I take a photo of every single thing I eat on Instagram. What it allows is understanding that’s what I’m putting in my body.

“Even if I bring a Tupperware container for lunch,” he adds, “I’ll often take it out and put it on a plate—and I find it tastes better. It’s completely subjective—but that’s why restaurants plate their food. It’s this concept of, when you look at something, it changes your relationship to it.”

That ability to look at something differently, in order to change behaviour, is part of how Royston lives a creative life—in a culture that’s experiencing an uptick in obesity, a phenomenon Royston describes as the result of living in an obesogenic culture.

Along the way—whether through activity groups he’s been leading, or through The Fat Project’s Instagram page, or an upcoming web mini documentary that he and Roadwest Pictures plan to release for free on the Internet, Royston’s secondary goal is to empower others with weight issues to take the long view and join him in re-inventing the public perception of what it means to be fat.

Because fat, he says, remains one of the last great social taboos.

“I have so many amazing privileges,” he says. “I’m Caucasian. I live in Canada. I’m male. I’m straight. I had the privilege to go to university [a Bachelor of Math from Waterloo and a Non-Profit Executive Certificate from Stanford]—so I have all these privileges and I’ve barely experienced any fatism or discrimination.

“I’ve had it a little bit,” he says, “but the other positive is that I’m quite an extrovert. I don’t face the same intimidation factors that someone who doesn’t have all those boxes checked faces, and so I wanted to partially do it to make it easier for others to do this and to be more public about being fat, and that fat people aren’t lazy. I have two jobs. I have three kids, I have a spouse and now have this project, all while being 400 pounds—so it’s not a direct correlation [between being overweight and being lazy].”

And as far as the question of why live a creative life? Maybe the question should have been why not live one?

“Because it’s eminently rewarding,” he says. “It’s an expression of yourself. I’ve been able to express myself through The Fat Project in a way that I haven’t for a long time, so this helps me have my own voice.”