Sometimes, the route through a creative life takes a couple twists and turns that the person living it didn’t see coming.

That’s the type of long and winding road that’s been travelled by Rita Sirignano, who grew up in New Jersey (in Bruce Springsteen’s hometown, Freehold), went to art school in Rhode Island (at the prestigious Rhode Island School of Design or RISD, spent the 1980s in New York’s frothy art scene (where she worked at P.S.1 and was a budding abstract expressionist)—and 30-odd years later, discovered that her painting was hanging in the office of the Alberta premier.

How did she get from there to here?

It sure beats Rita—and that’s okay.

As Sirignano—who grew up in a house filled with artistic temperaments understands–that’s how creative lives go, sometimes.

Sirignano is also one of the city’s most popular and longstanding freelance writers, with a long string of feature stories for the award-winning Swerve, in addition to many other Calgary Herald stories—she spent time as a book critic there—and other publications such as Avenue Magazine, where she started out her Calgary freelance career, in the late 1990s, writing Cool Hunter for $75 a month.

The last few years, she’s worked as a Programming Associate alongside CEO and Creative Ringleader (and Swerve’s creator) Shelley Youngblut at Wordfest, Calgary’s beloved literary festival, wrangling authors and helping keep the city’s literary scene rich and abundant—particularly when it comes to connecting authors to visit different schools in the city.

“Writing and art-making saved me in school,” Sirignano says, “so when I see a kid connect with a visiting writer or illustrator, it makes my heart sing.”

There have also been various creative detours along the way, such as working as an extra on Atom Egoyan’s film Ararat—which Sirignano transformed into stories for Avenue and The National Post.

Just like George Plimpton, the genteel New Yorker who once donned goalie pads to see what it would be like to be an NHL goalie for the Boston Bruins, Sirignano practices immersive storytelling—although she’s a little more offhand about what she does than that.

“I do something, and then I write about it,” she says. “I would never call myself a journalist.

“To me,” she adds, “a journalist is someone who goes to Vietnam, and has bullets whizzing by. I’m just writing about a movie here!”

And, like many a creative life, there have been various fiscal and emotional—and physical—detours as well, as Sirignano embarked upon a journey that took her from the streets of Soho to Montreal, Ottawa, Texas, upstate New York, and then Calgary, where she relocated to in 1997.

Lost in all those moving boxes for several decades were her canvasses and brushes.

“In all this time, I barely painted,” she says. “For a variety of reasons.

“I had no money,” she says. “Money has hampered my artistic—my creative life—and it’s even doing it now. I stopped painting, basically.”

Then, one day an artist she knew in Calgary was between homes and staying with her mother in a two bedroom apartment where she painted in the kitchen.

Sirignano was forced to admit to something inside herself.

“I remember going home and saying okay, I’ve got no excuse. I could paint on the f-ing bed,” she says.

Sirignano adapted her old 1911 house by setting up shop on her stairwell, where she painted two paintings.

“I hung the painting on the wall and I’d have to go backward down the steps, to look at it as I was painting,” she says.

As luck would have it, Sirignano sold both, for around $4,000, to the Alberta Foundation for the Arts.

She knew what she wanted to do with that money.

“I found a guy who only builds garages—one of those garage package places—and he built me a studio–essentially a double garage–in the backyard,” she says. “The AFA money didn’t cover everything–it still doesn’t have heat–but it covered a lot of it.”

Sirignano finally had a studio to paint in again. 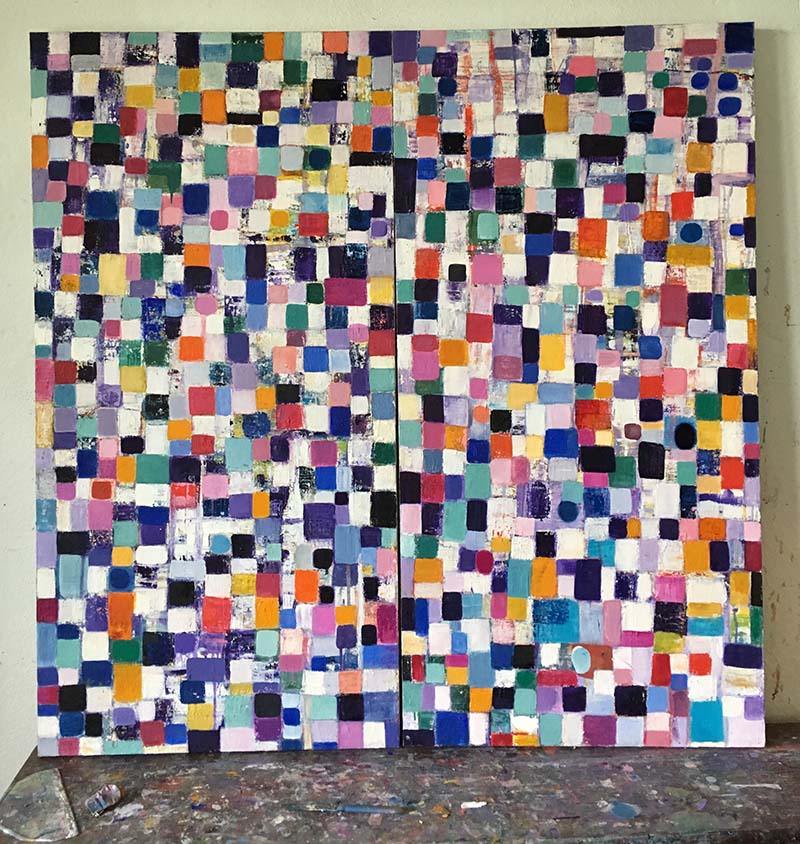 As Sirignano likes to say, when she’s telling one of her stemwinding stories, which might be described as early Springsteen (long, winding, never dull but sometimes they lose the thread)… long story short: in 2015, Rachel Notley and the NDP get elected, resulting in Sirignano’s friend Joe Ceci becoming Finance Minister.

One day, not long after the election, Ceci walks into Notley’s new office.

“He goes into Rachel’s office, which had been Prentice’s office, and he’s looking at the wall behind Rachel’s head, and he’s like, that looks like one of Rita’s paintings!” she says. “So he goes over to the wall and there’s my name on the wall!”

It turned out Sirignano’s painting had been hanging on the wall while Jim Prentice was premier.

It was a far cry from painting on the stairwell to the premier’s office, but that’s how creative lives go, sometimes.

“Those two paintings—I figured they were sitting in a basement along with the thousands of other art pieces that the province buys,” she says.

22 years after landing in Calgary for what she figured would be a temporary stay, she’s built herself a studio—and a home.

She used to dye her hair every two weeks, but it was damaging her hair, so eight years ago, she decided to just go grey—with a little jolt of courage she got from a visiting Wordfest author, Anne Kreamer, the author of Going Grey.

“Strangely, it was more my women friends than men who had a problem with me going ‘silver,’” she says.

Now, a decade later, kids have turned going grey into a thing.

Her New York and RISD friends think of her as an abstract painter who vanished one day, until they rediscovered her on Facebook—and she’s back to painting in her spare time. (Youngblut features details of one of Sirignano’s paintings she owns on her Facebook page).

She had some exhibitions in group shows in New York back in the day, but hasn’t really shown her work in Calgary and is starting to think that maybe it’s time to get some paintings together and have an exhibition.

Her Calgary friends think of her as a writer and Wordfest staff member. Many have no clue she ever painted.

Add the two Ritas together, cover her in grey, and you get as creative a life as a person could hope to lead.

But why would anyone want to, if it’s so much trouble—so unstable, so uneconomic, so bloody frustrating?

“The days of moving to New York City with $500 in your pocket, like I did, are over,” she says. “But if you’re asking why do the arts matter, I like Oscar Wilde’s line: ‘It’s through art and art only that we can shield ourselves from the sordid perils of actual existence.’”