Sable Sweetgrass has a story to tell.

Talking with the Calgary writer, playwright, and filmmaker is a little like going for a walk in an unfamiliar place that looks kind of cool, but you only have a vague idea of where the walk leads to.

Sweetgrass’s stories start in one place, and then—like life—veer off in some unforeseen direction, before eventually, Sweetgrass finds her way back.

Or to look at it another way: Maybe her stories come out exactly the way they have to, because it’s just life that takes us in all these unforeseen directions.

Her inspiration is no mystery.

“I loved listening to my mom and my grandma,” she says. “They’re great storytellers. There are so many native people who are. Blackfoot people I think, are just natural storytellers.”

Sweetgrass’s stories come out in every aspect of her life, whether it’s writing them down for the page—she’s working on a book—or the stage, or at the dinner table—she was one of the commissioned artists at the recent Common Ground dinner series, a trio of dinners hosted by Calgary Arts Development aimed at fostering reconciliation.

It was inspired, in part, by Sweetgrass’s own life, as a transgendered adoptive parent of a boy with FASD who just happened to change the course of Sweetgrass’s own personal journey in all the right ways.

Before she adopted her son, Sweetgrass worked at the Glenbow, and through them, received a recommendation for a position to work at a museum in New York City, which would have taken her on a whole different journey. 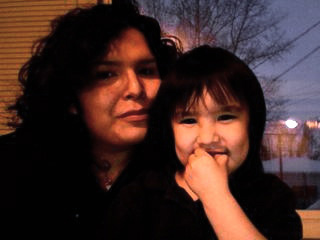 Sable and her son | Photo: Courtesy of Sable Sweetgrass

“I had no plans on becoming a parent,” she says. “It just kind of happened. I was suddenly taking care of this kid. His father is a relative of mine, his mother is a friend from high school, and it was just supposed to be a temporary situation, like helping take care of him for a while and then it turned permanent.”

Raising a child with FASD has alerted Sweetgrass to the ways in which it’s misrepresented in the community at large.

“There’s a lot of people in my community that have FASD, and I’m starting to find that a lot of people who are in prison have FASD,” she says. “A lot of children that are in foster care also have FASD. It’s an invisible disability. When you meet someone with FASD, you think—that person’s strange, they’re not all—but actually they have brain damage.

“So… I feel like I have to talk about it more.”

While she grew up, for a while, on the Blood Reserve, most of her life has been spent in Calgary, living, in her own words, a pretty regular Calgary life. Pretty regular at least when she wasn’t studying writing at the University of Calgary (not a great experience), being mentored by Richard Wagamese and Thomas King at an Indigenous writer’s retreat at the Banff Centre (which changed her life), or doing an MFA at the Institute of American Indian Arts in Santa Fe, where she mentored with writers such as Sherman Alexie.

“I love Calgary,” she says. “Moh-kins-tsis [its Indigenous name].

“From what I understand, it was Macleod who called it Calgary, after a Scottish town or Scottish bay.

“I think Moh-kins-tsis has more meaning,” she says. “It will probably never ever be called Moh-kins-tsis except within the Aboriginal community—but Calgary—most of my family lives here. Friends live here. It’s home.”

“When I was going to school here, back in the 80s and 90s, people used to say, ‘You should go back to the reserve.’

“And I would think, that’s where they think we belong? On the reserve? But this [Calgary] is Blackfoot territory. This is where we’re from.

“My mom used to say, ‘This is where we’re from! We belong here! Why are they telling us to go back to the reserve?’”

While Sweetgrass is proudly Blackfoot, she recently discovered she’s 4% Finnish/Northern Russian and 1% Irish.

“It really made me think about how I feel about—I’ll just say it—white people,” she says. “My mom and I were having a conversation, and I said well, when you really think about it, if it wasn’t for this ancestor of ours who married into our culture, and had children we wouldn’t be here.”

Sweetgrass’s own creative life has taken a few twists and turns, which makes her see the whole experience of living less as a LinkedIn profile and more like a worldly walk.

“I haven’t been someone who just focuses completely on art,” she says, “one project to the next to the next. It was the same way with school. I just kind of dropped out and then worked and got different experiences. I dropped out in junior high, then went back later on. I thought school will always be there. I went back when I was 18 to finish high school, then left again.”

At 14, she underwent gender transition—which, thanks to having a supportive mom, and schoolmates, Sweetgrass says went relatively smoothly.

“Back then it was kind of dangerous,” she says. “Back then, people were all hung up on AIDS and gay people. Transgender wasn’t even a word back then. It was just ‘faggot’ and ‘freak’ and so I think that’s why I got out of school as fast as I could. My mom took me out for my own safety—and I took my time transitioning.

“And then when I was ready, as Sable, I went back to school, and never had any problems. People look at Calgary like it’s this backwards conservative place—and in some ways it is—but I never had people coming after me when they found out. People for the most part were respectful.”

Awowakii received enthusiastic, well-attended readings in Edmonton and Toronto but is still looking for a home for its world premiere production.

Sweetgrass knows exactly where she wants that to happen.

“I would really like it to be shown in Calgary,” she says. “The few native plays that have happened in Calgary and Southern Alberta packed audiences—native people come out for that. They’ll come off the reserve and come into the city.”

Nowadays, the thought of living the writer’s life in New York isn’t such a big deal to Sweetgrass.

Raising her son and telling her stories, her way, is.

“When I was younger, I could probably have done it,” she says. “Now, I just want to finish writing my book.”

Why does living a creative life matter so much to Sweetgrass?

“We have to get through life,” she says. “We have to interpret our own story constantly and so I think creativity helps us.

“For me anyways, creativity has helped me.

“Blackfoot stories—that’s what they were doing,” she says. “They were constantly trying to look at what was going on with our people through the ages and trying to interpret it—and they did it creatively, whether it was on the wall of the teepee, or in design or through storytelling.

“That just helps us get through, I think.”