Shivani Saini grew up in Edmonton, painting and studying visual art. However, when it came time to go to school, she chose to study broadcasting at Ryerson in Toronto, a decision that led her to finding work—work that, alas, had nothing to do with painting and visual art.

Instead, Saini spent 20 years in TV, including three as a producer on the award-winning APTN series Blackstone—but also feeling, on occasion, that she had missed her true calling.

After three seasons on Blackstone, Saini left the show in order to live in Berlin.

She wasn’t quite sure why, just that Berlin was calling.

“I felt like it was necessary to switch things up in my life,” she says.

Despite not really knowing anyone—apart from a few friends of friends—it didn’t take long for Saini to feel like a Berliner.

Berlin was also the spot where she launched her own company. Atelier Culturati is a one-stop culture shop, which offers production and consulting services to artists and creative organizations.

“The word atelier [artist studio] is commonplace throughout Berlin,” she says. “There are galleries and ateliers everywhere, and I really loved that word. It pays homage to my visual arts background.

“Culturati [art appreciator],” she adds, “was a word I came upon while developing the concept for my company.”

Saini decided to create a company that would champion artistic and creative works that sought to change the world—or people’s understanding of it, at least.

“It’s essentially a studio,” Saini says, “designed to facilitate and support the work of artists. As a television producer, I was always interested in content that helped to educate people in some way, or raise awareness for something, and it just became really clear. I love getting involved in projects and work that help to positively transform the human condition.”

Among those projects are Memento mori, a cinema-verite documentary by award-winning filmmakers Rosie Dransfeld and Niobe Thompson, School of Thought, launched in Calgary in spring 2016 by spoken word impresario Sheri-D Wilson, and the world premiere of Making Treaty 7, for which Saini did the marketing and communications.

That project, launched by the late Michael Green of One Yellow Rabbit and a group of Aboriginal community leaders, is an interdisciplinary historical drama that tells the story of the founding of Alberta through the eyes of First Nations participants. 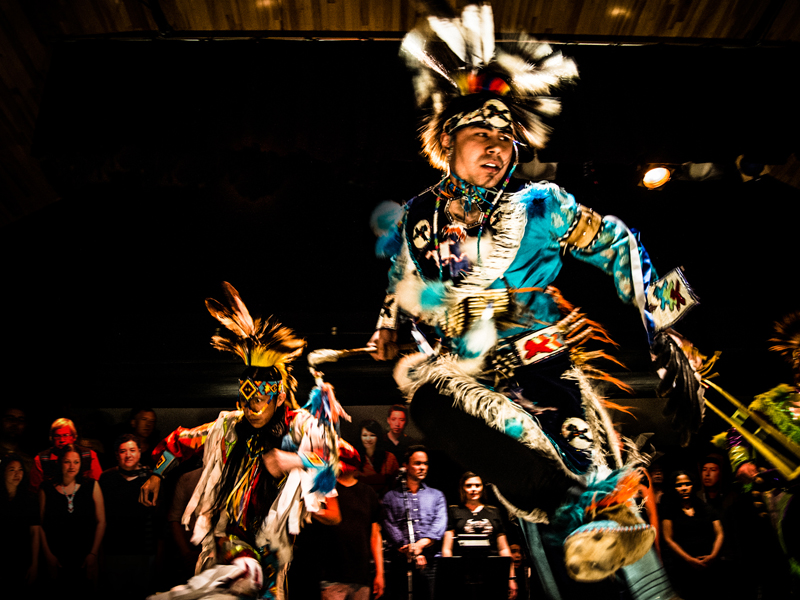 Shivani Saini worked on marketing and communications for Making Treaty 7 in 2014 and 2015 | Photo: Arnell Tailfeathers

Not that long after launching the world premiere, which took place in a tent at Heritage Park in September 2014, Green and Elder Narcisse Blood died, along with two others, in a car accident outside Regina on a snowy morning in February 2015.

Saini heard the news in Berlin.

“When they passed,” she says, “there was just no second thought about it. I got on the first plane I could to come back and to be with everyone. Working with Michael Green was such an incredible experience. He was, without a doubt, one of the best mentors I’ve ever had.”

And, it turned out, her work as a producer on Blackstone laid the foundation for her work on Making Treaty 7.

“Working on Blackstone,” she says, “introduced me to so many Indigenous artists across multiple disciplines. I found they were folding me in and inviting me to other types of work they had, so over the last five or six years my work has taken me into the arts. I was finding that my skill-set as a producer and consultant was really transferable to the [performing] arts.”

Now that she has roots sunk in Edmonton, Calgary and even Berlin, Saini has reached a spot in her life where there’s no one spot she really calls home—and no need to, either.

“I’m in a place in life where I can be mobile,” she says, “and I quite like that. I like being able to move around and have experiences in different places, and I think there’s a lot of really great people everywhere—I know that sounds super optimistic, but it’s quite true!”

And what could Calgary, an emerging creative city, learn from Berlin?

“If the conditions in a city are right,” she says, “then artists will feel welcome there. One of the appealing conditions to artists in Berlin is that there’s accessibility to space, so artists can start working out of a place. It’s one of the lesser expensive cities in Europe and that’s why a lot of young people—especially young Europeans—are there.

“What I’ve found,” she adds, “is that artists have a natural ability to create community. It seems to be a side effect of the creation they do. Every city is different and I think each has its own unique energy.”

From her experience working on projects such as Making Treaty 7 and now School of Thought, Saini says Calgary already does a wonderful job of this.

“It’s just a matter of continuing,” she says. “The best thing to do is stay aware and keep your ear to the ground about what’s going on, and see how you might be able to support it.

“There are a lot of exciting things going on in Calgary, so I think the more aware the city can be of that, the better.”