Tet Millare doesn’t live a creative life. She lives as many of them as she possibly can, simultaneously.

That’s because the Calgary-based queer activist is a hum of creative living—whether shooting photographs at various events around town, such as the Glitter Gala, or volunteering to be a living book as part of the Living Library series launched several years ago by the Calgary Public Library, or even in her most recent creative endeavour, writing.

Millare is also an active and passionate participant in Voices, a coalition of Calgary people of colour (POC). And the former school teacher also manages to work full-time, administering prisoners’ accounts at the Calgary Correctional Centre.

Simply fitting all of that into one life requires a creative approach to living—but then again, Millare, who grew up as a jock in the Philippines (her best sports were table tennis in high school and basketball in University), reverberates with positive energy. So if anyone can pull off living multiple creative lives, she can.

Oh, we almost forgot. She also participates in a drop-in “choir” called Local Sing, organized by Alex Whyte, that meets once a month.

“I started with it last month, because I really need an emotional outlet through art,” she says. “We studied the song I Wanna Dance With Somebody the first time I went and at the next one we’re going to study the song River by Joni Mitchell.”

Add to all of that, a bit of dance—and you have what appears to be the full menu of Millare’s creative life.

“Every skill that you put into practice,” she says, “taps into a different part of your brain.”

Millare was invited to be a guest artist performer of the Calgary version of of Queer Slowdance With Radical Thoughts, an art show by Heather Hermant and Alvis Parsley, which was part of the Mountain Standard Time Performative Art Festival in October 2016. It took place over several nights at Legion #1 on 7th Avenue downtown.

“Queer Slowdance With Radical Thoughts,” she explains, “is a combination of slow dancing and human library. Each of us—as living books—represents a type of some stripe and you have something you share about your life.

“There are four books, four people in each dance,” she says. “Each of us memorizes a particular piece, an excerpt from queer history—I recorded a text from Audre Lorde, a feminist activist poet [as well as reciting excerpts from a poem from a Japanese poet called Jellyfish].”

The combination of text and storytelling and movement, she says, makes for a well-balanced creative meal.

“You tap into all the different parts of your body and brain,” she says. “Sometimes it takes time to get your dancing part, so I take it slow, and read the text so the story can be appreciated as well.” 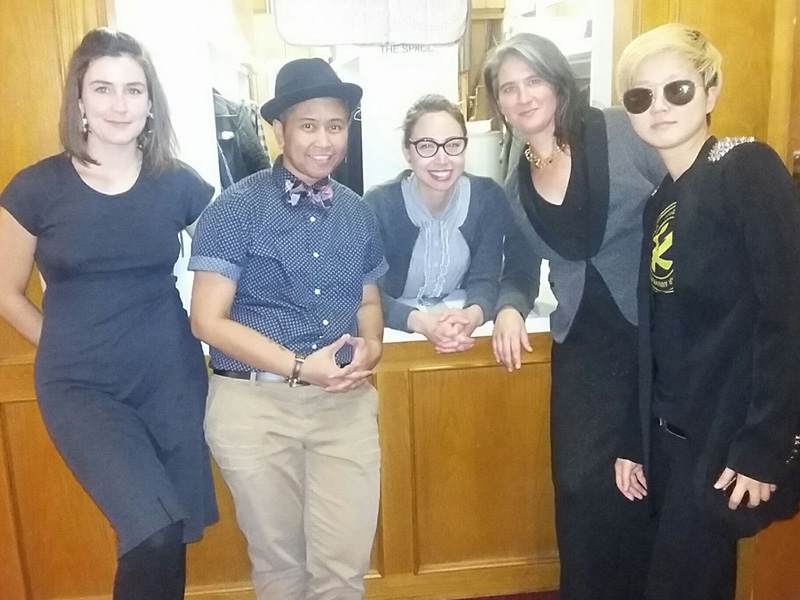 Millare is learning to put some of that creative side of her brain to use in her work with Voices, a coalition of Calgary’s people of colour, which took part in a recent debate surrounding Calgary Pride’s reaction to the inclusion of uniformed police officers in the Toronto Pride Parade.

Calgary’s queer community, Millare says, is dominated by—and represented almost exclusively by—mostly white guys. They don’t always represent the perspective of people of colour, some of whom have experienced systematic and institutional racism and are triggered by the sight of a uniformed police officer.

Although Millare also acknowledges she hasn’t experienced the disconnect between white people and people of colour that other members of Voices have, she figures it gives her an opportunity to act as a kind of mediator or translator between the two different viewpoints.

“I’ve lived comfortably,” she says. “There’s so many people around me and I’m so comfortable, I get along with a lot of people. I don’t feel the effects of racism personally, myself.”

Then, at an open forum held at Arts Commons last August, she heard another set of stories, from other people of colour, that told a different story about race in contemporary Calgary. “That forced me,” she says, “to see racial dynamics a bit differently.

“It was an eye opener,” she continues. “I really would like to be a bridge connecting the groups. It’s really hard for a lot of people to accept the reality of how it is for some. But in a way… when some doors close, others open. As much as we want to keep communications open between people, everyone needs some translating sometimes.”

Now that she’s taken up writing a memoir of her decade as a member of Calgary’s queer community, she’s discovered she needs to translate something else—the growing gulf between her generation of queer Calgarians, and a new generation that marches to a different beat altogether.

“The older [queer] generation has this different ideology,” she says. “And the young ones have a different one as well. A lot of them identify themselves as gender fluid, [or] genderless—they don’t want the binary.

“In the older [queer] community,” she adds, “it’s mostly about conforming to [old binary gender roles]. Even with lesbians, it’s about butch and femme—conforming to that binary way of thinking. [Whereas, with] a lot of the younger ones, [they define themselves by saying] I’m not that. I’m not this.

“Its nice to see the queer community grow, but it’s also a struggle. There’s a real [generational] division in the community now.”

While generation and gender and racial gaps are all challenging, they’re not insurmountable—particularly if your life toolkit includes creativity.

“It’s a good way to show your vulnerability,” she says, “being able to express that freely—and then allowing others to really see you in that way… I think that makes a person stronger. When you do something creative you’re putting yourself out there.”