The tone of the newspaper articles told one story.

The data told another.

In mid-May, there were a few articles about the Calgary Film Centre in various media outlets, mentioning that occupancy was down in the studio’s second season, which boasts 50,000 square feet of state of the art studio space.

However, the same articles also mentioned that the $10 million the city had invested (along with $5 million from the province) in building state-of-the art film and TV sound stages had generated $178 million in spinoff economic activity in the city, well up from $165.5 million in 2016.

Namely—in the teeth of a somewhat brutal recession caused in large part by plummeting oil prices—every dollar the city invested in its sound stages returned around $17.80 in economic activity, in a city that sorely needed some.

And that figure doesn’t include either the economic activity generated by other local productions that don’t shoot at the Film Centre, or in any way factor in the ancillary benefits to Calgary’s national and international branding efforts that come from shooting—among other things—Inception, Interstellar, the Oscar-winning The Revenant, The Bourne Legacy, as well as cult western-sci fi TV hit Wynonna Earp, BBC’s Tin Star, AMC’s Hell on Wheels, and CBC Television’s long-running hit Heartland, among others.

For Calgary Film Centre General Manager Erin O’Connor, the figure to pay attention to is $178 million, not the occupancy rate of its soundstages.

“It’s huge” she says, sounding more bemused than anything. 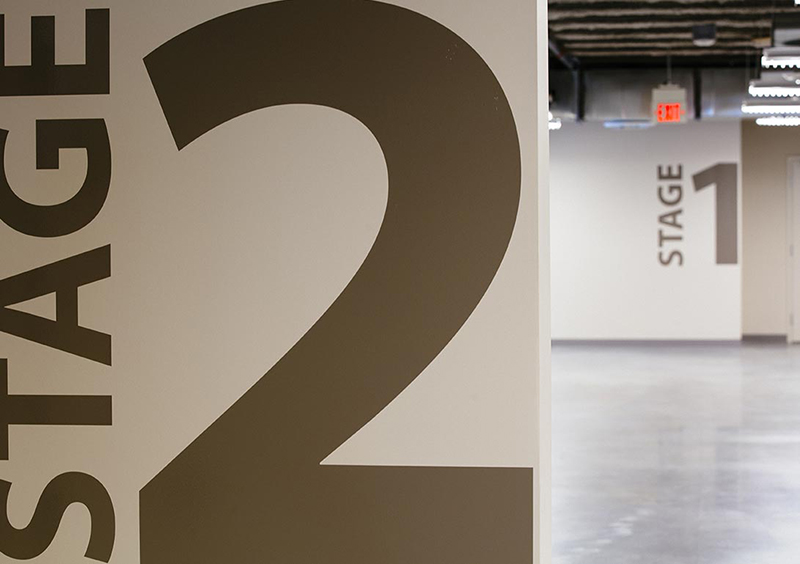 While there’s no question the sound stages are a big catalyst to draw Hollywood productions north to Calgary, the inescapable reality of the movie business is that sound stages are one part of delicate infrastructure that includes geography, tax credits, airline connections—and available light.

The good news: Calgary has the longest summer days anywhere, dazzling and varied landscapes nearby, and is a direct, three-hour flight from LA.

That direct flight, O’Connor confirms, is the reason why Fargo producers chose to shoot their series in Calgary instead of flatter, more Fargo-esque Winnipeg.

“I have heard that Fargo Season 1 star Billy Bob Thornton didn’t want to go on two flights,” she says.

“The crazy things that determine locations—sometimes it can come down to that!”

“It goes to prove that producers are still coming here, to make their work—but they come for the location and the light in the summer,” she says.

“They don’t necessarily come for the Film Centre,” she adds. “The Film Centre is a piece of infrastructure that’s a tool in the tool belt to help sell this place as a year-round filming centre.

“They’re still coming—we’re doing a lot in film and TV in terms of production and creative industries. So it’s a really positive story.”

In order to rent out some of those vacant soundstages, the Film Centre may include advertising and digital media content creators in the future.

“It’s not changing, it’s still screen production,” O’Connor says. “It’s still being used for the purpose it was built for—but the clientele might shift. We’re not going to hold out for Hollywood all the time, we’re going to keep one studio for rentals—which is great. It’s a positive thing.”

And don’t forget: In a packed media and information landscape, a community’s film and television scene can provide nearly as much of a tourism and branding buzz as hosting an Olympic Games, a Stanley Cup run—or perhaps a Royal Honeymoon.

That was made evident last year by the presence of Ewan McGregor, star of Season 3 of Fargo, talking up Calgary on late-night American television.

“He had a great time here,” O’Connor says. “And he loved the crews. Calgary has more Golden Globes, Emmy, and Oscar wins in the last 15 years than any other jurisdiction in Canada. We’re very proud of the talent and the crews we have. He enjoyed the production experience here.”

“The Film Centre played a big role,” she says. “I’m personally proud of that.”

Also, the reality of renting soundstages is that sometimes, you can’t give every series in town the studio space they need.

“They needed to shoot in one place, and so they ended up in a warehouse,” she says. “But because we had Tin Star shooting in two studios, we didn’t have enough space for them.

“They wanted to be shooting in one place, and so they ended up in a warehouse.”

“Tin Star is in two of the studios all the way through August, so we can’t complain,” adds O’Connor.

“And there are a couple of big ones [Hollywood studio features] coming into Studio 1 too, so I think the picture is actually more positive than the way it was painted in the papers.”

O’Connor—who travels internationally to promote Calgary’s film and TV scene—says that more about Calgary has changed over the past several years than just the film studios opening.

“Calgary has come a long way,” she says. “Everyone has heard of Calgary. They know what’s been filmed here, and they know why they would want to film here.

“They know Calgary has the amenities and services they need, we have a walkable city, we have restaurants—great places to eat—that top end Hollywood executives appreciate and return to. Being a cosmopolitan city is a big plus along with extended magic hours of light and a wider variety of locations, award-winning crews and state-of-the-art studio space to boot.

“The 18 hours of beautiful sunlight in the summertime is a really big draw for producers,” she adds.

The city also has astonishing flexibility in terms of look and feel.

“Calgary has been everything from Mongolia to Wyoming and Utah and small towns like Bemidji, to places like LA, New York, and San Francisco,” she says. “We really have incredibly talented location scouts here, who can figure out how to read a script, and a treatment, and figure out how to adapt an area for interiors and exteriors–so we have the flexibility to host all kinds of stories, and make it work.