The week-long program, created by the Alberta Writers Guild, brings 40 young people aged 11 to 19 together in Kananaskis country between July 14 and August 2. It’s a lot like all summer camps have been doing ever since there were kids and a summer to kill before going back to school in the fall.

At this camp, however, the kids use those woods to fuel their imaginations, as they write the stories of their lives.

WordsWorth director Colin Matty says, “In the past we’ve offered everything from experimental poetry, genre fiction, and journalism to improv, book binding, songwriting, podcasts… the program uses creative writing as an entry point to all manner of creative arts.

“Outside of class, we hike by the river, go LARPing in the woods, sing songs by the fire, and create a space that encourages risk taking and sharing the fruits of one’s artistic labours.

“At its heart,” he adds, “WordsWorth is a community founded upon creativity, inclusivity, and individual growth.”

And all of it is driven, in one way or another, by a collective love and passion and reverence for language.

It might be surprising to parents concerned that digital devices have robbed a generation of the ability to structure a sentence, or pay attention to one, to learn that the irrefutable lesson Matty learns every summer when he runs the camp is the simplest: Words still matter.
Words matter to kids now as much as they ever did.

For the youth who participate in WordsWorth, language is a true superpower.

“Words allow us to share our inner, invisible selves with the world,” Matty says. “To use words well is to build better bridges between each other. 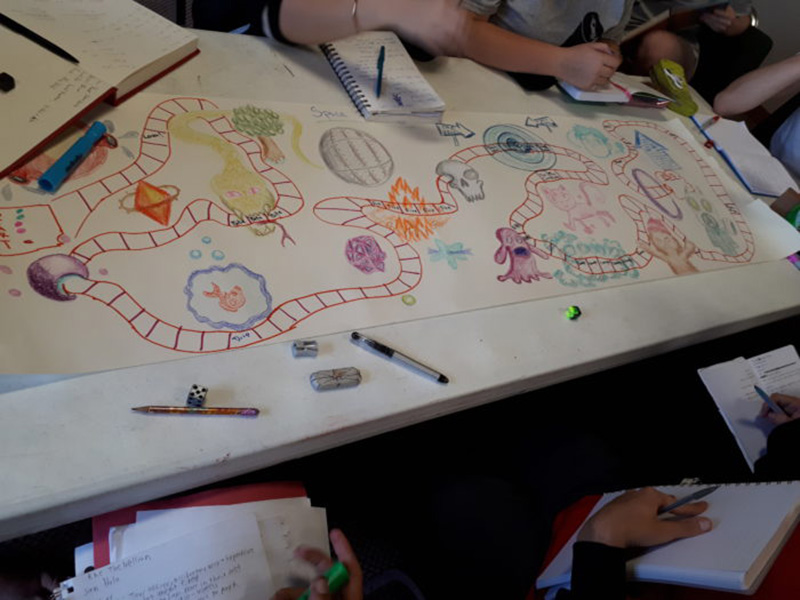 Of course, any time a group of creative minds gathers together, another kind of dynamic can develop—namely, the competitive desire to churn out a complete project in the least possible amount of time.

It’s a bit counter-intuitive to imagine a camp in the woods as a hotbed of Type A personalities, but Matty says WordsWorth is less about producing finished products than engaged ones—although if you get swept away by your project that’s okay too, he adds.

“Most of our courses are process-oriented rather than product-focused,” he says, “but that doesn’t stop people from completing exciting projects. We’ve had students working on zines, operas, soundscapes, collage and blackout poetry pieces, comic books and stand-up comedy routines, handbound books, songs, short stories, and monologues.”

“Some courses are dedicated to something specific [this year’s Mythic Poetry for example], while others are more open-ended explorations of world-building, visual art, or dramatic performance,” he says, “where students can adapt the workshop to their own interests and ongoing projects.”

And despite being word-driven, he says WordsWorth participants come from a variety of creative disciplines.

“A fair number of our campers are primarily digital artists or musicians or sketch artists,” he says. “The idea is to embrace new challenges, regardless of your personal preference—the science fiction author that takes a dance class will certainly find something that inspires their craft, often in unexpected ways.”

Of course, it’s still a summer camp. And you’re still dealing with kids, in the summer, so once in a while, they take a break to play death polo.

“Two teams take over the shallow end of a swimming pool and lean two flutterboards against one another at either end as a goal. There’s a jump ball in the middle, and from there it’s a full contact battle to knock over the opposing teams flutter boards with the ball. It is a contest of strength and dexterity and teamwork and it is an absolute riot,” he says.

If there’s one drawback that Matty has experienced in nearly a decade with WordsWorth—the last five as its director—it’s that many of those students, who return year after year as kids, have nothing similar to turn to once they turn 19.

“I would love to start a similar program for people beyond the age of 19. A place like WordsWorth does wonders for the confidence and capabilities of its participants and instructors alike, and I would love to be able to offer a space like that for ‘grown ups’ and graduates of WordsWorth, who often become isolated from other working artists in their practice,” he says.

Parents often tell their young children to “use your words.” This is one summer experience for youth that has put that into powerful practice—and will continue to do so into the future.

“A word is a thought made actual. It is at turns a tool, a toy, or a weapon,” Matty says.

“I believe that words are magic—they don’t call it spelling for nothing.”