The economic impacts relate to the direct and indirect impacts from the injection of dollars that result from the operating expenditures of these collective arts organizations. Types of operating expenditures include: salaries and benefits, production and equipment, fees paid to artists, rent and facility costs, marketing and communications, supplies, administration and other costs.

Even during COVID-19, Calgary’s arts sector has generated more than $100 million in value-added (GDP) and sustained over 1,200 jobs in the fiscal year beginning 2020.

The activities of arts organizations generate significant annual economic impacts, primarily through their expenditures on goods, services and labour that inject new dollars into the provincial economy. The operating grant clients generated an estimated $102 million of value-added (GDP) in Canada.

Most of the GDP impact generated occurred in Alberta ($86 million), while the impact in other provinces combined is $16 million. It is expected that most of the direct impacts of arts operations (consisting of salaries) will remain within the Calgary area. Calgary specifically retained an estimated $72.1 million.

More than 1,100 jobs are sustained in Alberta, while 122 indirect or induced jobs are supported in the rest of Canada. 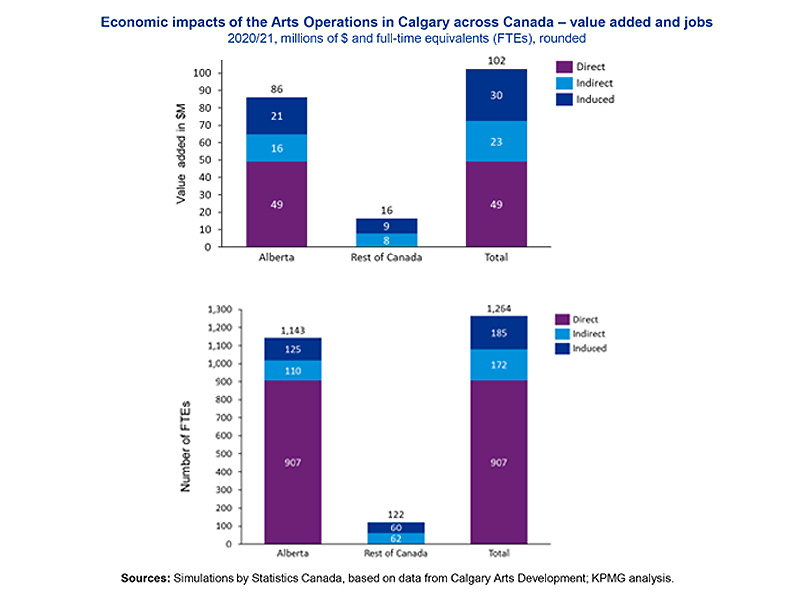 $19 million in estimated taxes across government levels in Canada

Government revenues include: taxes on products such as GST, provincial sales tax except in Alberta, gas tax and other taxes; taxes on production such as capital taxes, license fees, land transfer taxes, and local real property taxes, fees and other levies; and income tax estimates on direct labour.

The majority ($15.9 million) generated in Alberta, of which:

An additional $3.4 million in provincial and municipal government revenues are generated indirectly outside Alberta.

The disruptive effects of COVID-19 in the Calgary arts sector

This assessment shows the disruptive effects of the COVID-19 pandemic on the arts sector. Programming cancellations impacted revenue levels (declining from $120 million in 2018 to $96 million in 2020/21), especially earned revenue.

Public sector funding available during the emergency was essential to partially offset this decline. Expenditures also fell and remaining expenses concentrated in sustaining organizations’ payrolls. As a result of lower expenditure levels, the economic impact of the industry was lower compared to a previous 2018 economic impact study by KPMG. However, this study provides evidence that the impact of operations of Calgary Arts Development clients is significant and important and should grow with the rebound of economic activity in Calgary, Alberta, and across the country.

The impact of the arts sector is multi-dimensional 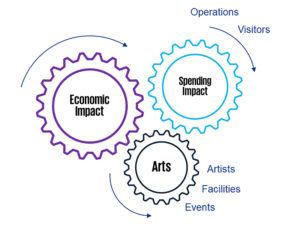 Arts and culture generate operational expenditures and draw out-of-province visitors who spend money in Calgary. This in turn produces an economic impact on the provincial and local economies. But the impact of arts organizations goes beyond this.

Arts facilities draw interest towards areas of the city and thus become a catalyst for other developments/investments. Beyond the significant economic impacts, arts contribute other intangible benefits such as showcasing the city, providing education opportunities, inspiring youth, wellness, and contributing to the quality of life and sense of community in Calgary. Arts organizations add community assets, entertainment and vibrancy to the city.

In 2020, facing the COVID-19 emergency, approximately $1.1 million was invested through the Short-Term Relief Fund, helping 57 organizations and 133 individual artists navigate the shutdown of programming and cancellation of contracts. Calgary Arts Development invested about $2.3 million in 125 non-profit arts organizations, from the City of Calgary’s Emergency Resilience Fund.

The Statistics Canada Input/Output Model can be used for many types of industries and impacts, which makes it more flexible and also allows for comparison between studies. There are limitations in all input/output models, but Statistics Canada is the most frequently used in Canada. It is flexible, rigorous and allows for comparison between provinces and sectors. 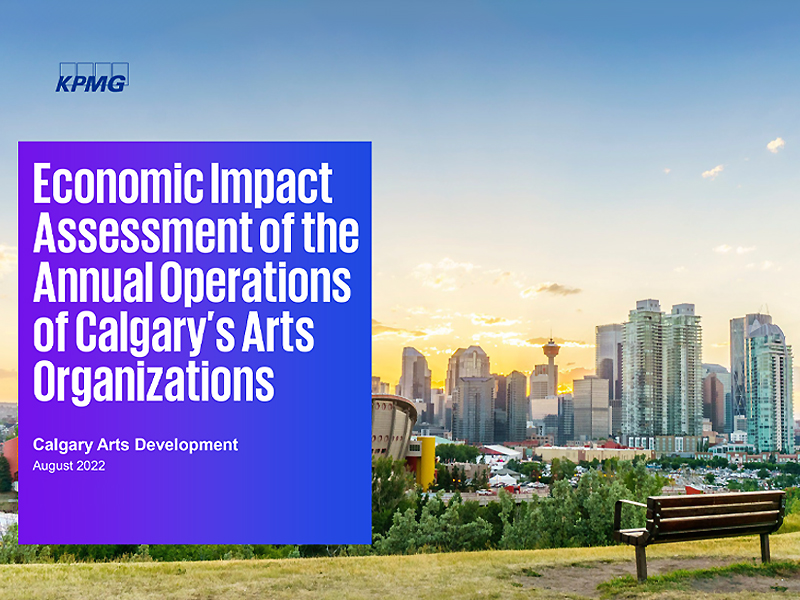