Despite a global pandemic and rising inflation pressures, the 2022 Calgary Engagement Survey shows Calgarians continue to explore and find ways to connect with the arts.

While the original versions of the Citizen Engagement Survey were fielded biannually in 2016 and 2018, the global COVID-19 pandemic resulted in the decision to delay the next version of the survey. Changing contexts are altering the conditions under which Calgarians engage with the arts.

The results of this survey show large audiences that are eager to return to live events though many individuals remain concerned about crowded gatherings and some will continue to prefer the online offerings they discovered while in lockdown. Financial pressure and changing priorities post-pandemic will also inform future participation.

Calgarians engaging, but not as often as in 2018

While nine out of 10 Calgarians remain engaged in a single way – by observing/listening, attending, or creating art – those who engage in two or more ways declined since 2018.

Attendance has fallen, leaving many who were previously immersed as now merely engaged.

One in three Calgarians report a weaker connection to the arts in the last 12 months.

91% of Calgarians remain engaged with the arts in at least one form (similar to 2018 levels), but how they are engaging is shifting. Fewer have been able to attend arts events — either due to COVID-19 or for economic reasons.

Primary concerns for not attending events are COVID-19, cost and crowds. These concerns are heightened for women and those older than 55. Older, longtime Calgarians and visible minorities in the suburbs engage the least, and indicated they engaged less than in 2018. For them, COVID-19 and crowd concerns are the most frequent things that prevent them from attending live events.

Child-unfriendliness and time concerns were highlighted as challenges to attendance by parents.

Individuals who identify as culturally diverse or as individuals with disabilities had high rates of concern around physical access to programming, resulting in lower participation.

Economic hardship is very real for Calgarians. Reduced income and the rising cost of living has resulted in lower disposable income to spend on experiences.

Economic challenges have resulted in a drop in charitable giving, with a change in income being given as the primary reason for individuals not making a donation to a cultural organization.

Calgarians are not as comfortable in large crowds as before

COVID-19 aversion was listed as the number one reason that people aren’t engaging, particularly for those aged 55+.

Concerns over not wanting to be in crowds was the third highest reason for lack of attendance, especially for women and those aged 55+.

Positive outlook on the role arts play in Calgary

Despite reduced participation rates, Calgarians continue to have a positive attitude about the role arts and culture play in the community and the importance of youth having access to arts opportunities. Significantly fewer people report feeling that arts and culture are not for them.

“Significantly fewer people report feeling that
arts and culture are not for them.”

Most Calgarians, even those not highly engaged with the arts, value the role of the arts in creating a vibrant city. Making the city a better and more beautiful place to live are the top arts benefits for Calgarians. Many Calgarians recognize the value of the arts as an economic driver through an attraction for tourists (34%), the economic benefit it brings to the community (28%), and employment creation (22%). Only 6% of Calgarians do not believe the arts offer real benefits to the city as a whole.

An increasing number of Calgarians feel that developing local artists is a good thing for Calgary (92%), and that it is important that there are organizations dedicated to the development of the arts in Calgary (88%). Only a small percentage of Calgarians disagree with these views.

Observing and Listening (media-based) are now the most common forms of arts participation in Calgary.

Calgarians are most likely to see public art as supporting the growth of the local arts community, while also bringing a sense of delight to everyday spaces and providing opportunities for people to experience art that enriches their everyday lives.

Calgarians continue to perceive Calgary as less creative than other cities

Calgary, in fact, saw a continued decline that began in 2018 when comparing itself to other cities as a creative hub. Only Winnipeg remained stable with 42% of Calgarians feeling that Calgary is more creative and artistic than the capital of Manitoba. Calgarians increasingly feel that Calgary is less creative than Edmonton, Toronto, Vancouver or Montreal.

Calgary Arts Development strives to increase and use our resources wisely, foster collaborative relationships and make the arts integral to the lives of Calgarians.

Through its many activities and programs, Calgary Arts Development supports individual artists, artist collectives and arts organizations in their efforts to forge even stronger connections with the community. Key to this is investing in continuing to understand how the community perceives and engages with various arts events and activities.

Since 2014, Calgary Arts Development has partnered with Stone-Olafson to better understand the degree and nature of how Calgarians are engaging with arts and culture in our community. Specific objectives include:

The survey instrument and sampling plan were developed by Stone-Olafson in collaboration with Calgary Arts Development.

Within the sample, quotas were set to ensure representation by region within the city, including Northwest, Northeast, Southwest, Southeast and Centre City. The definition of Centre City reflects the alignment of the City of Calgary’s Centre City Plan.

A sample of this size delivers an overall reliability rate of +/-3.01%. 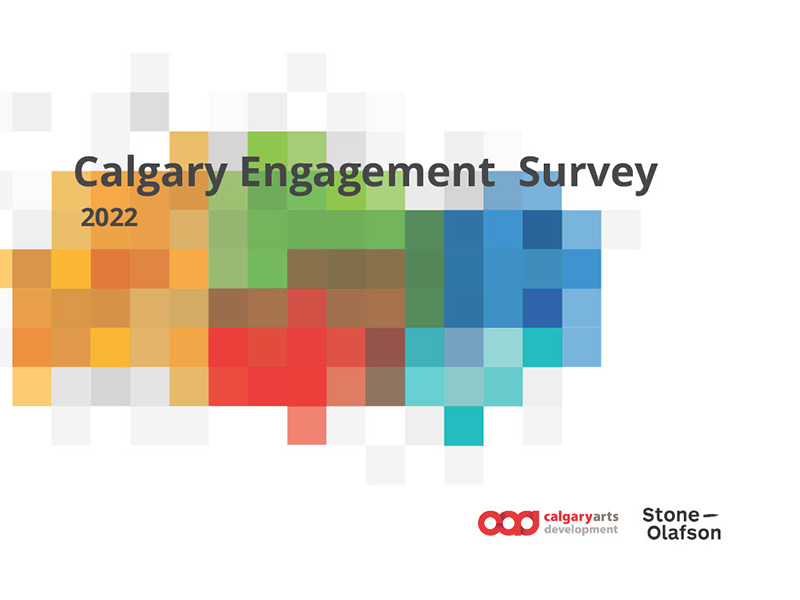