At the beginning of the year (can you believe it’s December already??) I set goals around working in the arts and culture sphere and engaging more with Calgary’s creative communities.

Despite the barrier that the pandemic presented and my artistic outlet suffering as a result, the opportunity to work with Calgary Arts Development this year has gone a long way toward meeting those goals. Here I reflect on my directories and research work with Calgary Arts Development and share some thoughts on Calgary’s anti-racism efforts this year.

Over the summer, I worked with local organizations and individual artists to add hundreds of listings to Calgary Arts Development’s artist and cultural directories. I was left impressed with the breadth of artistic talent from and based in our city. Through the process, I’ve been able to discover new favourites like NASARIMBA’s large-scale abstract murals and Sheila Lee’s whimsical paintings of crows and ravens, to name a couple.

More recently, I have been working toward adding almost 1,000 space listings to the directory while Calgary Arts Development focuses on finding a new platform to replace SpaceFinder, which shut down service in October.

In the past couple of months, I’ve also enjoyed assessing Calgary’s plans and policies regarding the creative economy as part of a larger research initiative.

The United Kingdom’s Department of Culture, Media and Sport defines the creative economy as “those industries which have their origin in individual creativity, skill and talent and which have a potential for wealth and job creation through the generation and exploitation of intellectual property.”

The creative industries have an emerging role to play in Calgary’s own economic future.

According to Calgary Economic Development, “Calgary’s low operating cost and growing talent base have the city in a position to be a leader in digital media.”

However, as it stands, when it comes to putting Calgary on that path, the goals are there, but the actions are lacking.

I started my time with Calgary Arts Development this past summer at a time of heightened social awareness around police brutality and racial injustice against Black and Indigenous communities. In our city, we had historic turnouts to Black Lives Matter protests. However, since then, what should be a mostly sympathetic city council has drastically fallen short.

I think of The City’s challenge in holding meaningful and directed public hearings that prioritize Black and Indigenous folks as well as a failure thus far to reallocate even the smallest portion of the Calgary Police Service’s budget. These are actions we have seen in places like Edmonton and other municipalities across North America.

To say that it’s been quite the year is a massive understatement. Still, despite all of the challenges, including never having met most of my colleagues in person, it’s been an alright year spent slowing down, growing my hair out for the first time, and air frying whatever possible. I’m feeling optimistic about the coming year, but until then, mask up and stay safe, everyone! 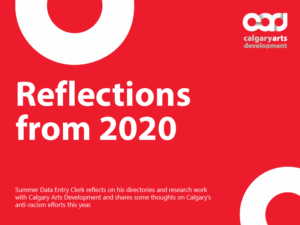 (he/him/his) is a freelance communications specialist and sometimes photographer who is near completing his degree in communications and media studies at the University of Calgary. In his spare time, you will find Haider scheming up new dessert ideas or enjoying Calgary’s arts landscape.