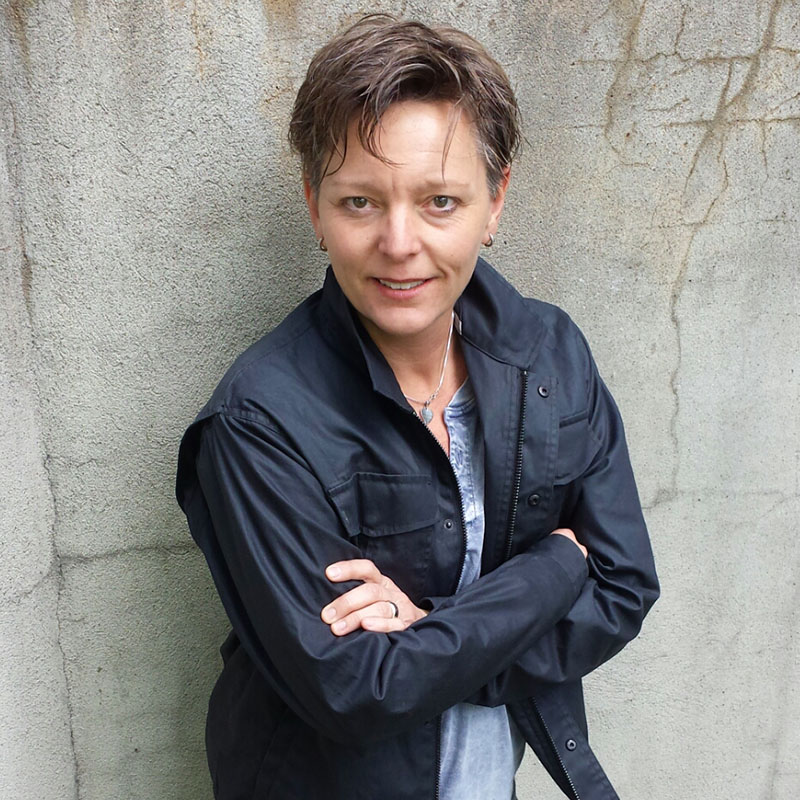 Natalie Meisner is a multi-genre award-winning writer who grew up on the South Shore of Nova Scotia and has been based in Calgary since 2000.

She began her career as a writer in the spoken word and indie theatre scene in Halifax, has had plays produced across the country, and now writes and teaches literature and creative writing at Mount Royal University (MRU) where she also serves as Director of Changemaking facilitating community and university arts-based projects in social justice and social innovation.

Her new book of poetry, Baddie One Shoe is a sequence of performance poems that pay homage to women renegades of the past who fight the power with laughter.

Meisner’s ongoing career as a playwright and early experience as an actor inform her work and she is most interested in the performative aspects of poetry as well as the power of comedy to build resilience.

Baddie One Shoe (Frontenac) is a sequence of performance poems that pay homage to renegades of the past who fight the power with laughter. Her play BOOM BABY (about the lives of workers in the oil patch) won both the Canadian National Playwriting Award and the Alberta Playwriting Award in 2019. Legislating Love: The Everett Klippert Story (U of C press) played to full houses in Calgary with Sage Theatre, was a finalist in the in the Betty Mitchell Awards for best new play, was selected for The Dublin Gay Theatre Festival (2021) and is a part of the Alberta Queer Calendar Project. Double Pregnant: Two Lesbians Make a Family topped nonfiction lists and was a finalist in the Atlantic Book Awards. SPEED DATING FOR SPERM DONORS (Playwright’s Canada Press) was a hit at Lunchbox and Neptune Theatres. Her children’s book My Mommy, My Mama, My Brother & Me is available from Nimbus Publishing.

Meisner is a wife and mom to two great boys, a social justice advocate, and believer in the power of the written word to change lives.

About the Calgary Poet Laureate

Calgary Arts Development administers the program in conjunction with a volunteer selection committee, which appoints each Calgary Poet Laureate for a two-year term. The Calgary Poet Laureate is intended to be an artistic ambassador for Calgary, presenting at civic events, and producing literary work that reflects our city and its citizens. Kris Demeanor served as the first Calgary Poet Laureate from 2012 to 2014 followed by derek beaulieu from 2014 to 2016, Micheline Maylor from 2016 to 2018, and Sheri-D Wilson from 2018 to 2020.

For more information, contact Kaley Beisiegel at kaley.beisiegel@calgaryartsdevelopment.com or 403.264.5330 ext. 214.