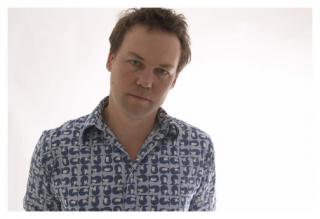 Calgary-born songwriter Kris Demeanor delights in exposing the underbelly of western Canadian culture—gambling, drug use, murder, religion, the suburbs. His numerous CDs of original work explore the darkness and absurdity of these corner of Alberta life.

While Kris’ music has taken him around the world performing, he has become a fixture of Calgary’s spoken word, theatre and music communities, creating music and lyrics for numerous award-winning projects.

Career highlights include taking the award-winning short film based on his song I Have Seen the Future to the Sundance and Toronto film festivals, collaborating with the Calgary Philharmonic Orchestra on the 2011 event Acres of Dreams, and sharing a beer with David Byrne.

In addition to his musical work he writes extensively. Kris’ work has appeared in magazines like Alberta Views and Canadian Geographic. In 2009 he was awarded the Best New Magazine Writer Award for his feature piece ‘Get a Real Job’ in Unlimited. He performs regularly at the Banff/Calgary WordFest and the Calgary Spoken Word Festival.