Community Activism Through the Arts

When artists are at the grassroots of community, amazing things unfold. How can the arts bring the public together to experience greater connection, solidarity, understanding, belonging, and celebration? Using the Equinox Vigil in Union Cemetery, Carol of the Belles, Femme Wave as examples, Sharon Stevens and Kenna Burima will lead a conversation about community activism through the arts. Join them to share your ideas, challenges, and passion.

Community Activism Through the Arts – But Why?

Why should the arts be the catalyst to bring the public together to experience greater connection, solidarity, understanding, belonging, and celebration? Why become a community-based artist? Is the arts valued through community events? What is the role of funders? The City? The public? What myths do we need to dispel? Kenna Burima and Sharon Stevens will initiate a conversation. Join them to share your ideas, challenges, and experiences. 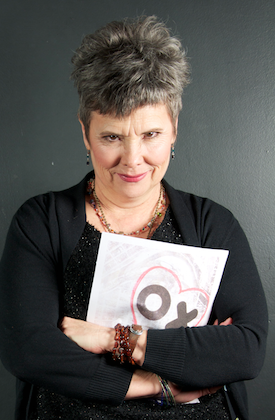 Sharon Stevens is a multi award-winning media artist, activist and instigator who’s made a career of integrating art and community ritual-making into a series of projects that enlighten, enliven and entertain.

A classically trained pianist with a flair for jazz, pop, garage rock, and every genre in between, Calgary’s Kenna Burima’s current work Hymn features swirling synths and a meticulously crafted horn arrangements laying the foundation for songs mining the social, political, and emotional ground of an angry world.

She’s a connector, a teacher, an activist—in her adopted hometown of Calgary, Kenna Burima has earned a reputation as someone who can turn ideas into big projects and inspire people to come together. But at her core, Burima wears one label most proudly: musician. A classically trained pianist with a flair for jazz, pop, garage rock, and every genre in between, the tool that Burima uses to express herself most purely will always be her music.

Burima’s love for all musical forms is clear from the sheer number and diversity of projects she’s involved in (she plays keys in garage pop group LoveWaves, the sweaty party band Beaver Squadron, in a classical duo with violinist Foon Yap, and as a hired keyboard gun for a number of other artists), but the best way figure out what drives Burima is to delve into her solo albums: classical-cabaret affairs that draw on her vast musical know-how. Pinning Burima’s solo music down is no easy task—the complexities of her writing and performances reflect the heart of an artist who is never content to restrict herself to one genre, one project, or one set of rigid ideas.

Burima’s second and latest solo album Hymn is the product of all of those converging ideas and genres: a bold and uninhibited album that sees Burima mining musical, political, and emotional ground, and bravely reporting her findings with raw honesty, while pushing her music to greater heights. Taking on her feelings about issues like Black Lives Matter, the epidemic of violence against women, Canada’s epidemic of missing and murdered Indigenous women, and the hate that grows out of fundamentalism, as well as personal experiences of loss and love (though, for Burima a love song can include references to crop circles or Game of Thrones), she shows no fear and lets her songs expose her thought process and own struggles with the world around her.

And because she’s all about community, Burima brought on a strong gang of musical friends to back her up on Hymn: as she sings her heart out and plays the keyboards, Steve Fletcher (who also produced the album) takes care of the synthesizers, with Jon May on drums and percussion, Carsten Rubeling on trombone, Andre Wickenheiser on trumpet, Mark DeJong on bass clarinet, and Jesse McMann-Sparvier on flute. These seasoned musicians bolster Burima and complement her work, making her message ring even clearer and more loudly.

Topical, expansive, vulnerable, and unabashedly honest, Hymn is a peek into Kenna Burima’s heart and soul.