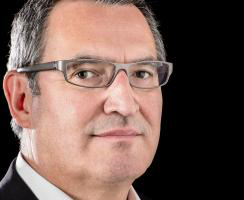 Brian Calliou is a First Nations thought leader. He is Cree from northwestern Alberta and is married with two grown children and three grandchildren. Brian is a lawyer by training and remains connected with the Indigenous Bar Association. Brian still plays competitive hockey, albeit old timer’s hockey, or as a friend put it, “over the hill” hockey. Brian loves music such as blues, folk, rock and country. He plays guitar, sings and is working on songwriting. He has a strong commitment to social justice and views his work as helping to build a better world. The Peter Lougheed Leadership Institute’s (PLLI) purpose reflects this commitment by developing leaders who want to make change and create a better world.

Brian is the Director of Indigenous Leadership and Management and leads a team of very dedicated people who also want to see a better world. Brian researches and writes about Indigenous community economic development, from a strength-based approach, that is, from a basis of stories of Indigenous organizational success. They call this a wise practice approach to community economic development, where they have identified seven elements that lead to success, including the central importance of Indigenous knowledge and wisdom. With research they have found that culture and identity are important areas that Indigenous leaders want to protect and cultivate as they face contemporary challenges and opportunities.